“The City of Chicago has long been a leader in adopting requirements for energy efficiency and sustainable design,” said Mayor Lightfoot. “Our buildings are major contributors to Chicago’s carbon footprint, so it’s critical that every construction and renovation project increases the efficiency and sustainability of our building stock as part of Chicago’s commitment to combat climate change.”

According to the Mayor’s Press Office, most requirements will apply to building permits applied for on or after Nov. 1, with additional requirements taking effect on Jan. 1, 2023.

The latest 2022 Code will improve commercial and residential structures by more than 40%, as compared to the 2001 adoption of energy-efficient construction requirements (based on the 2000 edition of IECC).

Since then, Chicago has only continued to improve its energy requirements. As one of the first U.S. cities to adopt the requirements from the 2021 IECC, the city will be positioned at the front of the line to apply for $1 billion in federal financial assistance, which was appropriated in the Inflation Reduction Act.

In addition to focusing on the reduction of building energy usage, the latest Energy Transformation Code will incentivize the use of equipment types and energy sources that will reduce greenhouse gas emissions and that are consistent with Chicago’s Climate Action Plan. 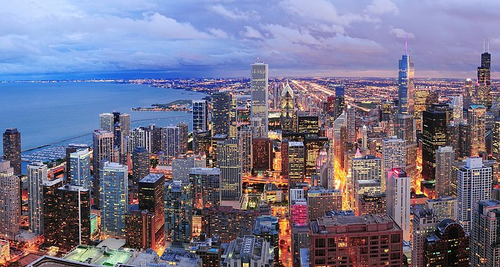 Two building certificate programs used as alternative ways to comply with the new energy codes will also be recognized by the city. These certificates include the 2021 Phius standard and the gold and emerald certification levels under the 2020 National Green Building Standard (NGBS).

A user-friendly version of the Energy Transformation Code will be published in print and electronic formats by the International Code Council later this year. The City of Chicago is also partnering with the University of Illinois' Smart Energy Design Assistance Center (SEDAC) to provide training on the new requirements.

Green building code initiatives go back to as early as 2017, with Ontario announcing that its building codes were set to bring existing buildings closer to net-zero energy usage. Those codes took effect in January 2019.

In August 2018, Boston introduced a proposal that incentivizes developers to incorporate more net-zero designs in the city’s building boom. Mayor Martin J. Walsh also set a goal for Boston to be carbon neutral by 2050.

By the end of 2018, during Toronto’s Buildings Show, engineer Gerald Genge spoke on the changes that Canada would be adopting in its National Building Code for 2020 and beyond. The codes were reported to now be based on predictive data instead of historic data, an approach that was found to be problematic by an auditor general’s report in 2016.

In May 2019, Nebraska lawmakers introduced a bill, updating its 2009 International Energy Conservation Code to the IECC 2018 version, giving the state the strongest efficiency codes in the Midwest.

A month later, New York City passed Senate Bill S6599, setting a net-zero emissions economy goal by 2050. The legislation followed the city’s $14 billion “New Green Deal” announcement in April, which aimed to reduce the city’s greenhouse emissions by 30% by 2030. The plan is outlined in the city’s report, “OneNYC 2050: Building a Strong and Fair City.”

In November 2020, San Francisco’s Board of Supervisors unanimously passed a new city ordinance, banning the use of natural gas or other fossil fuels in all new residential and commercial building construction projects.

At the time, the decision made San Francisco possibly the largest U.S. city to ban natural gas in new buildings.

Later that year, Boston City Council approved a new ordinance requiring all buildings larger than 20,000 square feet to eliminate carbon emissions by 2050. According to reports, the new ordinance would affect roughly 3,500 commercial and residential buildings, or about 4% of all structures in the city. Boston officials report that the structures account for 60% of the city’s building emissions.

In April, the Washington State Building Code Council approved a new commercial energy code in a vote of 11-3, mandating that newly constructed buildings be outfitted with all-electric space heating and hot water systems.

In July, the Council of the District of Columbia joined several other major cities in the nation through the unanimous passing of two new pieces of legislation requiring that all new buildings and substantial renovations in Washington D.C. be net-zero construction and banning the use of natural gas in most new buildings.

And most recently, in August, legislators from both the Massachusetts House and Senate passed a compromise bill mandating several green incentives.

Also known as the “Act Driving Clean Energy and Offshore Wind,” Bill H.4515 sets a target date of 2027 for the state of Massachusetts to have a minimum of 5.6 GW offshore wind development. In addition, the legislation would also offer tax breaks to companies contributing substantially to the “manufacture, fabrication, and assembly” of domestic supply chain components of the offshore wind industry.

The legislation also seeks to reform rate-payer-funded efficiency programs focused on clean energy and low-income households. In that same thread, it would also remove market impediments for medium-sized solar developments and would allow agricultural and horticultural land be used for solar panels, so long as the panels didn’t impede on the continued use of the land.

Not stopping at the adoption of clean energy practices, Bill H.4515 also tackles emissions and electrification in buildings and transportation vessels.

Regarding buildings, the bill would allow 10 cities and towns to require fossil fuel-free new construction. However, the approved locations would have to first meet the 10% affordable and multifamily housing targets. Additionally, the legislation calls for annual energy usage reports from buildings that are 20,000 square feet or larger.

The latest efforts are expected to save taxpayer dollars and ensure that the federal government leads by example in energy efficiency.

“The Biden Administration is leading by example to cut energy use and reduce its carbon footprint by adopting the latest building standards that drive down operating costs and therefore save taxpayer dollars,” said U.S. Secretary of Energy Jennifer M. Granholm. “Coupled with the appliance standards proposed today for American households, DOE is reiterating our commitment to reaching net zero carbon emissions, improving our air quality and keeping more money in the pockets of families across the country.”

Given the proposed standards and new codes, the DOE estimates that together they could potentially save more than $15 billion in net costs over the next 30 years and reduce emissions equivalent to the annual carbon emissions of 14.4 million homes over the same period.

The latest announcement follows the priorities previously set out by President Joe Biden’s bipartisan Infrastructure Law, which includes an unprecedented $225 million for state and local implementation of energy codes.

Starting in April 2023, all new buildings and major retrofits constructed by the federal government must be in compliance with the 2021 International Energy Conservation Code (IECC) and the 2019 American Society of Heating, Refrigerating, and Air Conditioning Engineers Standard 90.1 building energy codes.

During the first year of its implementation, the DOE estimates that $4.2 million dollars in operating costs will be saved. In an analysis of states following the latest IECC building energy codes, the DOE found that consumers would see $3.24 billion in annual energy cost savings.

In further research, the DOE noted that residential buildings specifically would result in national site-energy savings of approximately 9%, source-energy savings of nearly 9% and energy-cost savings of more than 8% if they were following the 2021 standards verses 2018.

Changes made to the IECC 2021 version as compared to the previous 2018 edition include:

In July of the same year that the new codes were updated, the IECC launched its “Code on a Mission” challenge, which aims to have over a third of the U.S. population covered by the 2021 IECC by the end of 2023. As a part of the challenge, the IECC asked the building industry and communities alike to update their building energy codes to meet or exceed the requirements of the 2021 IECC.

In addition to these recent efforts on improving federal building standards, the DOE is also seeking comment from stakeholders on two proposed residential-focused rules for 60 days and will hold a public meeting to solicit feedback from industry and energy-efficiency stakeholders:

By the end of 2022, the Biden-Harris Administration intends to finalize more than 100 proposed and final actions for appliance and equipment standards.