In an effort to meet a net-zero greenhouse gas emissions goal by 2050, legislators from both the Massachusetts House and Senate recently passed a compromise bill mandating several green incentives.

“Massachusetts needs to open up huge new sources of green electric power if it’s to stay on course for reducing emissions,” said Democratic State Rep. Jeff Roy and Sen. Mike Barrett in a joint statement. “Today’s compromise aims to ramp up clean power, especially offshore wind but also solar, storage and networked geothermal, and run it through cars, trucks, buses, and buildings, the biggest sources of emissions in the state.”

The legislation is currently being reviewed by Republican Gov. Charlie Baker.

Also known as the “Act Driving Clean Energy and Offshore Wind,” Bill H.4515 sets a target date of 2027 for the state of Massachusetts to have a minimum of 5.6 GW offshore wind development. In addition, the legislation would also offer tax breaks to companies contributing substantially to the “manufacture, fabrication, and assembly” of domestic supply chain components of the offshore wind industry.

The legislation also seeks to reform rate-payer-funded efficiency programs focused on clean energy and low-income households. In that same thread, it would also remove market impediments for medium-sized solar developments and would allow agricultural and horticultural land be used for solar panels, so long as the panels didn’t impede on the continued use of the land. 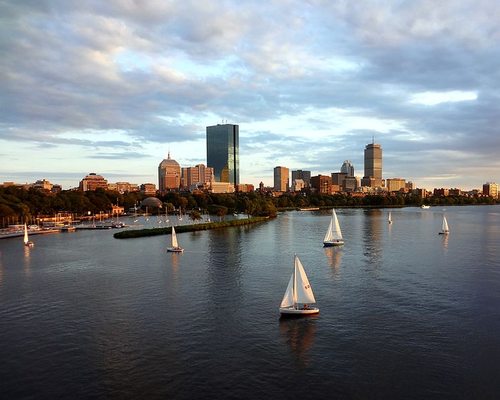 Leatherndevil, CC-BY-SA-3.0, via Wikimedia Commons
In an effort to meet a net-zero greenhouse gas emissions goal by 2050, legislators from both the Massachusetts House and Senate recently passed a compromise bill mandating several green incentives.

Not stopping at the adoption of clean energy practices, Bill H.4515 also tackles emissions and electrification in buildings and transportation vessels.

To battle tailpipe emissions, the legislation intends to increase the rebate for qualifying purchases and leases of zero-emission passenger cars and light duty trucks costing $55,000 or less to $3,500. An additional $1,000 would be offered to purchasers trading in an internal combustion vehicle.

The sale of new, zero-emission vehicles is slated to start in 2035. Five years before that, the Massachusetts Bay Transportation Authority would require that all bus purchases are zero-emission, with the entire fleet transitioning by 2040.

With these proposed mandates, the legislation encourages the creation of more charging stations.

Regarding buildings, the bill would allow 10 cities and towns to require fossil fuel-free new construction. However, the approved locations would have to first meet the 10% affordable and multifamily housing targets. Additionally, the legislation calls for annual energy usage reports from buildings that are 20,000 square feet or larger.

A full copy of the bill can be viewed here.

Back in September 2021, the Boston City Council approved a new ordinance, requiring all buildings larger than 20,000 square feet to eliminate carbon emissions by 2050.

According to reports, the new ordinance will affect roughly 3,500 commercial and residential buildings, or about 4% of all structures in the city. Boston officials report that the structures account for 60% of the city’s building emissions.

The Natural Resources Defense Council adds that the policy was developed with feedback from residents most impacted by pollution and climate change. The city convened a Resident Advisory Group with community organizations including Alternatives for Community & Environment (ACE), the Chinese Progressive Association, City Life/Vida Urbana, and New England United for Justice and facilitated by One Square World, which leads community-centered planning and policy development rooted in equity and sustainability.

The process was also supported by NRDC, Building Electrification Institute, Institute for Market Transformation, and other partners in the American Cities Climate Challenge.

More recently, the Council of the District of Columbia joined several other major cities in the nation through the unanimous passing of two new pieces of legislation requiring that all new buildings and substantial renovations in Washington D.C. be net-zero construction and banning the use of natural gas in most new buildings.

The Clean Energy DC Building Code Amendment Act of 2021 (Bill 24-420) requires that all new construction be subject to the District’s voluntary net zero energy standard. While the legislation itself does not establish the new net-zero building codes, it does instruct the mayor to create them no later than Dec. 31, 2026.

Furthermore, the legislation requires that buildings will be prohibited from using onsite fuel combustion, most commonly natural gas, for furnaces and/or water heaters. Buildings essential to protecting public health and safety, however, will be exempt from the fuel combustion ban when using backup power generators.

The second piece of legislation passed by D.C. Council was the Climate Commitment Act of 2021 (Bill 24-0267). If signed into law by Mayor Bowser, the bill would codify the 2050 carbon neutrality commitment, as well as add interim targets for greenhouse gas reductions between 2025 and 2050.

In addition, the bill would also require the District to achieve carbon neutrality for emissions associated with District government operations by 2040, and prepare an inter-agency action plan for achieving this goal. The bill also seeks to achieve a 60% cut in carbon emissions by 2030.

Both bills were headed to the desk of D.C. Mayor Muriel Bowser at the end of July.

Around the same time, the Canadian government published a renewed version of its Federal Agenda regarding volatile organic compound (VOC) controls on industry products, signaling the country’s intent to take additional action between 2022 and 2030.

“The Government of Canada intends to move forward with taking action to improve air quality in order to reduce adverse impacts of air pollution on health and the environment. One element of the federal government’s air quality program is to further reduce volatile organic compound emissions from consumer and commercial products,” wrote the Department of Environment and the Department of Health in a joint rationale.