DC to Ban Gas in Most New Buildings

The Council of the District of Columbia joined several other major cities in the nation through the unanimous passing of two new pieces of legislation requiring that all new buildings and substantial renovations in Washington D.C. be net-zero construction and banning the use of natural gas in most new buildings.

Both bills, now headed to the desk of D.C. Mayor Muriel Bowser, aim to codify the city’s climate goal of reaching carbon neutrality by 2045 and net zero emissions by 2050.

“Buildings account for close to 75% of the District’s emissions,” said Councilmember Mary Cheh, who introduced the bills. “So making our buildings more efficient and ensuring that they use clean energy, is probably one of the most important steps we can take to achieve carbon neutrality.”

The Clean Energy DC Building Code Amendment Act of 2021 (Bill 24-420) requires that all new construction be subject to the District’s voluntary net zero energy standard. While the legislation itself does not establish the new net-zero building codes, it does instruct the mayor to create them no later than Dec. 31, 2026.

Furthermore, the legislation requires that buildings will be prohibited from using onsite fuel combustion, most commonly natural gas, for furnaces and/or water heaters. Buildings essential to protecting public health and safety, however, will be exempt from the fuel combustion ban when using backup power generators.

The new codes are to be applied to all commercial buildings, residential condo and apartment complexes, in addition to single-family homes exceeding three stories.

Apart from banning natural gas, reports have noted that net-zero buildings can also be achieved through a combination of low energy demand and the onsite production of clean energy, such as solar panels. 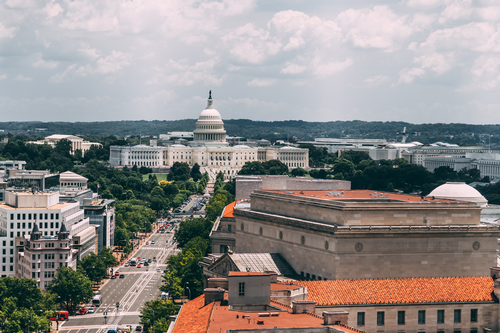 @tchompalov / Unsplash
The Council of the District of Columbia joined several other major cities in the nation through the unanimous passing of two new pieces of legislation requiring that all new buildings and substantial renovations in Washington D.C. be net-zero construction and banning the use of natural gas in most new buildings.

The second piece of legislation passed by D.C. Council was the Climate Commitment Act of 2021 (Bill 24-0267). If signed into law by Mayor Bowser, the bill would codify the 2050 carbon neutrality commitment, as well as add interim targets for greenhouse gas reductions between 2025 and 2050.

In addition, the bill would also require the District to achieve carbon neutrality for emissions associated with District government operations by 2040, and prepare an inter-agency action plan for achieving this goal. The bill also seeks to achieve a 60% cut in carbon emissions by 2030.

Even sooner, the legislation sets out to stop the installation of natural gas-powered furnaces and water heaters by the D.C. government by 2025. The following year, the District will be required to stop purchasing gas-powered vehicles.

“We’re taking a very pragmatic approach,” said Cheh. “We aren’t requiring the District to tear out old gas boilers or sell off its entire fleet of gas-powered vehicles. We’re allowing for it as we go forward, and in cases where there are issues, there will be flexibility.”

Green building code initiatives go back to as early as 2017, with Ontario announcing that its building codes were set to bring existing buildings closer to net-zero energy usage. Those codes took effect in January 2019.

In August 2018, Boston introduced a proposal that incentivizes developers to incorporate more net-zero designs in the city’s building boom. Mayor Martin J. Walsh also set a goal for Boston to be carbon neutral by 2050.

By the end of 2018, during Toronto’s Buildings Show, engineer Gerald Genge spoke on the changes that Canada would be adopting in its National Building Code for 2020 and beyond. The codes were reported to now be based on predictive data instead of historic data, an approach that was found to be problematic by an auditor general’s report in 2016.

In March 2019, the National Institute of Building Sciences and the New Buildings Institute, along with support from the U.S. Department of Energy and the Northwest Energy Efficiency Alliance, announced that they had developed a new tool to aid municipalities in dealing with energy use in buildings.

In May 2019, Nebraska lawmakers introduced a bill, updating its 2009 International Energy Conservation Code to the IECC 2018 version, giving the state the strongest efficiency codes in the Midwest.

A month later, New York City passed Senate Bill S6599, setting a net-zero emissions economy goal by 2050. The legislation followed the city’s $14 billion “New Green Deal” announcement in April, which aimed to reduce the city’s greenhouse emissions by 30% by 2030. The plan is outlined in the city’s report, “OneNYC 2050: Building a Strong and Fair City.”

In November 2020, San Francisco’s Board of Supervisors unanimously passed a new city ordinance, banning the use natural gas or other fossil fuels in all new residential and commercial building construction projects.

At the time, the decision made San Francisco possibly the largest U.S. city to ban natural gas in new buildings.

Later that year, Boston City Council approved a new ordinance requiring all buildings larger than 20,000 square feet to eliminate carbon emissions by 2050. According to reports, the new ordinance would affect roughly 3,500 commercial and residential buildings, or about 4% of all structures in the city. Boston officials report that the structures account for 60% of the city’s building emissions.

And most recently, in April,  the Washington State Building Code Council approved a new commercial energy code in a vote of 11-3, mandating that newly constructed buildings be outfitted with all-electric space heating and hot water systems.

During the U.S. Conference of Mayors annual winter meeting in January, President Joe Biden announced that his Administration would be launching a Building Performance Standards Coalition dedicated to delivering cleaner, healthier and more affordable buildings.

Other actions made to strengthen building performance standards include: