Researchers from the Tokyo Institute of Technology are utilizing machine learning to design polymer brush films for developing antifouling coatings. According to the team, they have identified the properties that affect protein adsorption and cell adhesion onto these films using a random forest regression model.

The study was recently published in the journal AC Biomaterials Science & Engineering and was led by associate professor Tomohiro Hayashi.

Polymer brush films consist of monomer chains grown in close proximity on a substrate. These monomers, or “bristles,” can form a highly functional and versatile coating, absorbing or repelling a variety of chemicals or biological molecules.

For antifouling coatings, polymer brushes have been designed based primarily on the interaction between monomers and water molecules. Researchers note that while this makes for a simple design, quantitative prediction of the adsorption of biomolecules, such as proteins, onto monomers have proved challenging.

For the study, the team fabricated 51 different polymer brush films of different thicknesses and densities with five different monomers to train the machine learning algorithm. Then, several algorithms were tested to see how well predictions matched the measured protein adsorption. 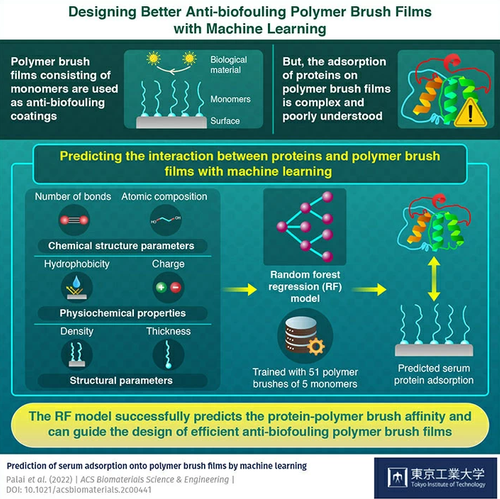 Tokyo Tech reports that, out of these models, the random forest (RF) regression model showed the best agreement with the measured protein adsorption values. Researchers then used the RF model to correlate the physical and chemical properties of the polymer brush with its ability to adsorb serum protein and allow for cell adhesion.

“Our analyses showed that the hydrophobicity index, or the relative hydrophobicity, was the most critical parameter. Next in line were thickness and density of polymer brush films, the number of C-H bonds, the net charge on monomer, and the density of the films. Monomer molecular weight and the number of O-H bonds, on the other hand, were ranked low in importance,” highlighted Dr. Hayashi.

Because of these results, the university states that the adoption of machine learning as a way to optimize polymer brush film properties can provide a good starting point for the efficient design of anti-biofouling materials and functional biomaterials.

In January, researchers at the University of Toronto announced they are looking at the adhesion of mussels on surfaces to potentially create new antifouling coatings for infrastructure and medical adhesives. The study, led by Professor Eli Sone, was published in Scientific Reports.

In March, a research team from the Shenzhen Institute of Advanced Technology of Chinese Academy of Sciences and Xiamen University announced the results of its study of a natural-based coating, which reportedly exhibited effective antifouling and lower toxicity.