According to a release from Nexxis, the one-of-a-kind system utilizes a human-sized robot that is designed to inspect the inside of caissons. These caissons are vertical carbon steel pipes up to 70 meters (about 230 feet) long and up to 1.2 meters wide.

The CCAIT system was reportedly developed in response to possible COVID-related supply chain risks, and was designed, developed and deployed in less than 12 months.

“The CCAIT system removes the costs of mobilizing tools from international locations, including the cost of delay in fractured supply chains. These can represent up to 50% of the total cost of an inspection campaign,” said Daniel Kalms, Woodside's Executive Vice President, Technical Services.

“It was incredible to see the team, including Woodside graduate robotics engineers, write software to dramatically improve the performance and usability of the tool. The project team was made up of people from local companies who came together and designed, procured, fabricated, tested and validated a robotic solution during the height of a pandemic in under a year.” 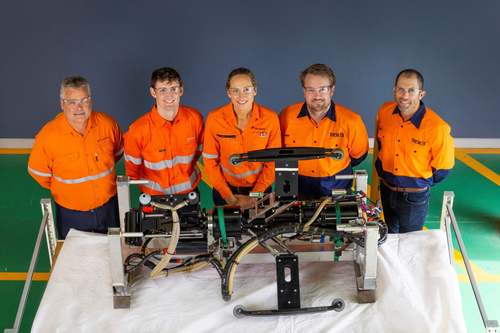 Remotely controlled from a safe location on an offshore platform by skilled technicians, the tool is lowered inside the caisson via a tether and winch arrangement. Wheels are then extended to centralize the tool within the caisson, with probe arms stretched out to enable ultrasound inspection.

High-definition cameras are able to stream video back to the technicians. Then, the technicians use this data alongside the asset team to define a forward plan.

“Building a bespoke Ultra High-Pressure cleaning solution that can quickly remove marine growth to allow inspection without damaging the protective coatings was challenging and rewarding. We drew from our local supplier expertise and relationships to test the latest technology onshore and successfully lead the offshore deployment,” added Chris Heron, a coatings subject matter expert from Woodside’s major maintenance partner Monadelphous.

Back in 2019, researchers from the University of Waterloo were working on developing a more reliable robotic inspection technology that could reduce the cost of bridge inspections.

Individually programmed with inspection plans and location focus areas per bridge inspection, the robots consist of six 5-megapixel cameras able to create a 360-degree view mounted on an autonomous ground vehicle. In addition to the cameras, the robots also use lidar—a remote sensing method using lasers—which collect data on present defects and makes an analysis of the inspected findings.

Additionally, the data recorded on the same bridge or structure can be cross-examined with previous inspection results, creating a display of key vulnerable areas. The university reported that the same software can even be used for inspections of water-based vehicles, drones, nuclear power plants, buildings and other infrastructure.

Last year, in April, a team from Carnegie Mellon’s Biorobotics Lab in the School of Computer Science's Robotics Institute tested what it’s calling a Hardened Underwater Modular Robot Snake. According to CMU, HUMRS was created to assist the Department of Defense with inspecting ships, submarines and other underwater infrastructure for damage or as part of routine maintenance.

Led by Howie Choset and Matt Travers, co-directors of the Biorobotics Lab, the submersible robot snake was developed through a grant from the Advanced Robotics for Manufacturing Institute. By utilizing HUMRS, the Navy would be able to inspect a ship while at sea and immediately alert the crew to critical damage or issues that require attention or maintenance.

Mechanical and mechatronics engineer in the Biorobotics Lab also working on the submersible snakebot, Nate Shoemaker-Trejo, explained that HUMRS’ distinguishing feature is that its narrow and jointed, giving it the ability to form and be flexible in otherwise tight spaces where traditional submersibles can’t reach.

For the technology, CMU reported that the team used existing watertight modules that allow the robot to operate in bad conditions. This, in addition to its modular design, allows the robot to adapt to different tasks, whether squeezing through tight spaces under rubble, climbing up a tree or slithering around a corner underwater. The team also incorporated new modules containing the turbines and thrusters to better maneuver the robot underwater.

Then, in November, researchers from the Korea Institute of Civil Engineering and Building Technology (KICT) announced that they have developed remote controlled robots to prevent falls at construction sites. The goal of the unmanned technology was to install girders and construct piers without putting human workers at risk.