According to CMU, HUMRS was created to assist the Department of Defense with inspecting ships, submarines and other underwater infrastructure for damage or as part of routine maintenance.

Led by Howie Choset and Matt Travers, co-directors of the Biorobotics Lab, the submersible robot snake was developed through a grant from the Advanced Robotics for Manufacturing Institute. Currently, the DoD is reported to have limited options when it comes to inspecting areas like a ship's hull, often requiring the Navy to either send down a team of divers at the ship’s location, postpone the inspection until the ship returns to port or schedule the vessel for a dry dock—all of which can be costly and take time to execute.

“If they can get that information before the ship comes into a home port or a dry dock, that saves weeks or months of time in a maintenance schedule,” said Matt Fischer, the program manager at the ARM Institute working on the project, who also served in the Navy for three years.

Besides saving money, Fischer added that since having experience in crawling in the ballast tanks of a submarine during his service, many crew members would happily pass the duty off to a robot. By utilizing HUMRS, the Navy would be able to inspect a ship while at sea and immediately alert the crew to critical damage or issues that require attention or maintenance. 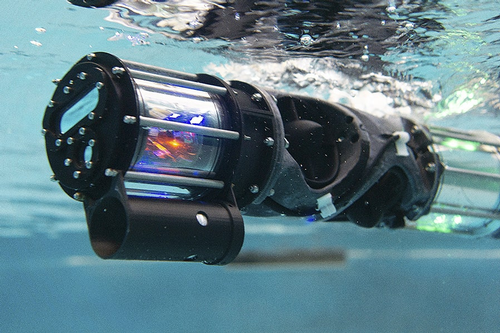 “We can go places that other robots cannot,” said Choset, the Kavcic-Moura Professor of Computer Science. “It can snake around and squeeze into hard-to-reach underwater spaces.”

Mechanical and mechatronics engineer in the Biorobotics Lab also working on the submersible snakebot, Nate Shoemaker-Trejo, explained that HUMRS’ distinguishing feature is that its narrow and jointed, giving it the ability to form and be flexible in otherwise tight spaces where traditional submersibles can’t reach.

For the technology, CMU reported that the team existing watertight modules that allow the robot to operate in bad conditions. This, in addition to its modular design, allows the robot to adapt to different tasks, whether squeezing through tight spaces under rubble, climbing up a tree or slithering around a corner underwater. The team also incorporated new modules containing the turbines and thrusters to better maneuver the robot underwater.

Steve McKee, a co-lead of the Joint Robotics Organization for Building Organic Technologies, a DoD task force interested in underwater inspection technology, said the project is a great example of a partnership between CMU, the ARM Institute, and the Department that aims to improve the readiness of equipment in the armed services.

“The advancements being made hold great promise for helping not only the Department of Defense but also various industries around the world,” McKee added.

The research team began working on the project in July 2020 and by March 2021, had it swimming in the CMU pool.

“I'm surprised that we made this robot work as fast as we did,” Choset said. “The secret is the modularity and the people working on this technology at CMU.”

Earlier this year, Norwegian technology company Eelume Subsea Intervention announced its development of a six-meter-long, snake-like robot, intended to serve the deep-sea oil and gas industry. The autonomous disruptive technology, referred to at Eelume, is designed to perform maintenance, inspections and repair on underwater infrastructure to make work safer, cheaper and less polluting.

According to Eelume Subsea Intervention, Eelume was designed after a decade of research on snake robots in collaboration with independent research organization SINTEF. However, the technology originally established itself in 2015 as a spin-off from the Norwegian University of Science and Technology.

The Research Council of Norway and Innovation Norway supported the development of the robotic technology.

The company reports that the underwater technology is basically a self-propelled robotic arm designed to live permanently under water, where they can be mobilized around the clock, regardless of ocean currents. Having constant access to continuous inspection, maintenance and repair capabilities near the subsea installations without the need for surface vessels means greener, safer and less costly subsea operations, ESI says.

Looking at more specific numbers, Eelume can be kept at docking stations up to 500 meters (547 yards) deep for up to six months without being brought back to the surface and can travel up to 20 kilometers (12.4 miles) before needing to recharge.

In addition to performing maintenance on underwater infrastructure such as wells, pipelines and other equipment, Eelume can also swap out parts for different tasks, including tools to operate subsea valves, and cleaning brushes to remove marine growth and sediments. Thanks to its snake-like design, the underwater robot can work in confined spaces and wriggle its body to stay in place during unfavorable weather conditions.

Eelume Subsea Intervention and Equinor will carry out final testing on the seabed later this year at the Åsgard oil and gas field. Eelume says it expects to deploy its first snake robots next year and hopes to have up to 50 in oceans around the world by 2027.

According to an analysis conducted by CNN, the global underwater robotics market is expected to be worth around $7 billion in 2025, inspiring other companies to develop similar technologies for commercialization as well.