Researchers from the University of Waterloo are working on developing a more reliable robotic inspection technology that can reduce the cost of bridge inspections.

A paper on the research, "Automating Data Collection for Robotic Bridge Inspections," has since been published in the Journal of Bridge Engineering.

Individually programmed with inspection plans and location focus areas per bridge inspection, the robots consist of six five-megapixel cameras able to create a 360-degree view mounted on an autonomous ground vehicle. In addition to the cameras, the robots also use lidar—a remote sensing method using lasers—which collect data on present defects and makes an analysis of the inspected findings. 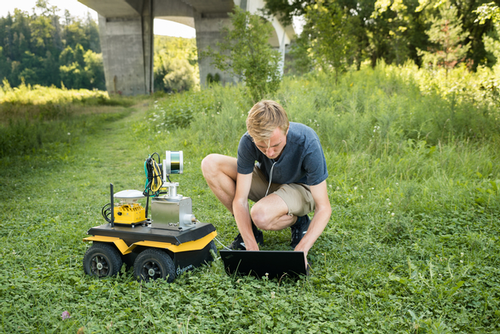 “There’s a lot of work that’s been going on with how to improve bridge inspection,” researcher Nicholas Charron told CTV News Kitchener.

“As it drives along, it scans and gets a full high-quality dense 3D map of the environment. Then, with the images, we can overlay that information onto this map we’ve created.”

Also reported by CTV, once analysis is taken automatically, researchers can obtain results within 15 minutes after collecting required inspection data.

Sriram Narasimhan, an engineering professor at Waterloo, Canada Research Chair in Smart Infrastructure and director of the Structural Dynamics Identification and Control Laboratory, also added that current inspection practices are subjective and often imprecise, at least in part, due to educated guesswork, among other reasons.

“We can do more than humans now do—and do it much better in every way,” said Narasimhan. “It is very inexpensive because you don’t need as many inspectors relying on specialized equipment such as lifts and you get much higher quality information.”

Additionally, the data recorded on the same bridge or structure can be cross-examined with previous inspection results, creating a display of key vulnerable areas. The university reports that the same software can even be used for inspections of water-based vehicles, drones, nuclear power plants, buildings and other infrastructure.

Now the researchers are working to develop a water-borne inspection platform and artificial algorithms. The new system aims to automatically detect and identify certain defects. In the future, the team hopes that the analysis of data collected will be able to more accurately assess structural integrity and forecast future repairs.

“We’re combining our infrastructure expertise with the latest robotics technology to greatly improve what is now a very manual inspection process,” Narasimhan said.