In a joint press release issued last week, the United States and the United Kingdom announced that the two countries had reached a deal to partially lift tariffs on steel and aluminum exports from the U.K. 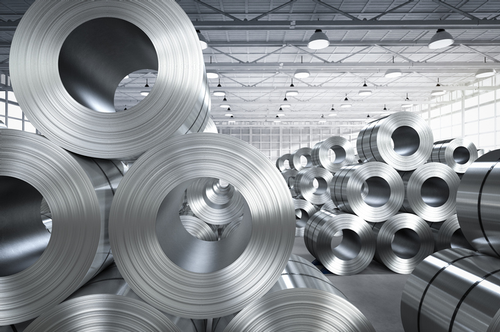 PhonlamaiPhoto / Getty Images
In a joint press release issued last week, the United States and the United Kingdom announced that the two countries had reached a deal to partially lift tariffs on steel and aluminum exports from the U.K.

In January 2020, Trump signed an initial trade deal with China that lowered levies on some other goods. The tariff is expected to stay in place, even after the election, as any move to reduce them will hinge on Beijing’s compliance with the terms of a phase-one trade accord.

The following month, Trump announced an expansion of tariffs on foreign steel and aluminum, claiming that the existing tariffs were not as successful as he’d hoped in restoring American production.

Under the new program, specific products made of aluminum were subjected to an additional 10% duty and certain steel products were tacked with a 25% tariff. However, Argentina, Australia, Canada and Mexico were exempt from the expanded aluminum tariffs. Those countries, along with Brazil and South Korea, were also exempt from the new steel tariffs.

By August, Trump announced that the U.S. was reinstating its 10% tariffs on raw aluminum imports from Canada beginning Aug. 16 following a proclamation by the then-president. Canada, then, announced shortly after that it would impose tariffs on $2.7 billion worth of imports form the U.S. in response.

According to the joint statement, the U.K. will be permitted to export 500,000 metric tons of finished steel and 900,000 metric tons of aluminum into the U.S. duty-free before tariffs take effect. In exchange, the U.K. has agreed to lift approximately $500 million worth of tariffs on U.S. products, such as whiskey, blue jeans and motorcycles.

The deal also requires that any U.K.-based steel producers owned by companies in China undergo a financial audit to conclude that there are no market distorting practices that would materially contribute to non-market excess capacity of steel.

Aluminum producers are also required to prove that products contain no aluminum from China, Russia or Belarus. Shipments are also subject to smelt and cast provisions.

“Today’s historic deal is a testament to that ambitious goal and will benefit America’s steel and aluminum industries and workers by protecting manufacturing, as well as consumers by easing inflationary pressures in the U.S.,” Commerce Secretary Gina Raimondo said in a statement.

“By allowing for a flow of duty-free steel and aluminum from the U.K., we further ease the gap between supply and demand for these products in the United States.”

The new deal is slated to go into effect on June 1.

In February, the U.S. and Japan announced that the 25% levy previously imposed by former President Trump would be removed from about 1.25 million metric tons of Japanese steel imports annually.

The decision made by President Biden to remove the tariffs arrives as the nation continues to mitigate inflation and a shortage of goods. Tariffs on $350 billion of various Chinese goods will remain intact.

In a joint statement by the two nations, it was reported that Japan would begin implementing “appropriate domestic measures, such as antidumping, countervailing duty, and safeguard measures or other measures of at least equivalent effect” in order to establish more market-oriented conditions for steel.

The new deal, like the European Union steel and aluminum agreement reached last fall, calls for steel imported from Japan to be completely produced in the country for duty-free access to reduce the risk of Chinese steel skirting U.S. tariffs. Unlike the deal, however, Japan did not impose retaliatory tariffs on U.S. goods such as whiskey, motorcycles and denim.

“This is a step towards a solution... but we will continue to strongly urge the United States to fully eliminate the tariff in a manner consistent with WTO rules,” said Japanese Industry Minister, Koichi Hagiuda.

Adding to that, U.S. Commerce Secretary Gina Raimondo was quoted as saying that the deal would “strengthen America's steel industry and ensure its workforce stays competitive, while also providing more access to cheaper steel and addressing a major irritant between the United States and Japan, one of our most important allies.”

The new deal is slated to take effect on April 1.

Despite experiencing setbacks as a result of COVID-19, in January 2021 a group of several domestic steel industry associations penned a letter to President Joe Biden, urging him to keep steel tariffs and quotas that were set in place by the Trump administration.

“Last year, the OECD projected that steel overcapacity would grow to 700 million metric tons in 2020—eight times the total steel output of the United States last year,” the letter read.

The organizations added that continuing the tariffs and quotes was “essential to ensuring the viability of the domestic steel industry in the face of this massive and growing excess steel capacity.”

Months prior to receiving the letter, in May, Biden had told USW that he would keep the tariffs in place until a global solution to the excess production could be negotiated. More recently, he again said that he would not make changes, pending consultations with U.S. allies.

Regardless of the intentions to keep the tariffs at the beginning of the year, by November, The White House announced a deal between the U.S. and the European Union to roll back tariffs on European steel and aluminum to lower costs on various goods, reduce carbon emissions and help supply chains get back on track.

As part of the agreement, the European Union agreed to remove billions of dollars’ worth (25%, respectively) of retaliatory tariffs on bourbon, motorcycles and other American-made products that were previously slated to increase.

In addition, the two nations reported that the agreement was open to any interested country that wished to join and meet criteria for restoring market orientation and reducing trade in high-carbon steel and aluminum products.