The White House recently announced a new deal between the United States and the European Union to roll back tariffs on European steel and aluminum.

Presented after President Joe Biden met with other world leaders at the Group of 20 in Rome, the deal is slated to lower costs on various goods, reduce carbon emissions and help supply chains get back on track.

“This announcement delivers a major win in the fight to address the climate crisis while protecting our workers and industry, and enabling them to compete in the global marketplace,” the Fact Sheet stated. “The President believes that climate action must mean good jobs – and today’s announcement demonstrates that we can work with our partners and allies to both reduce emissions, and protect and create good-paying union jobs at home.” 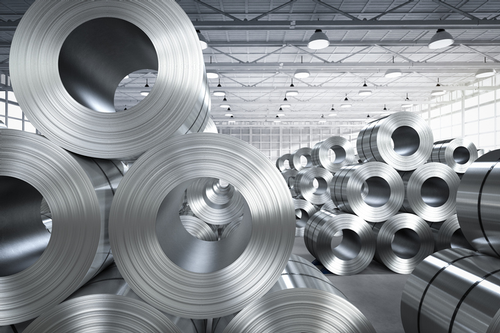 PhonlamaiPhoto / Getty Images
The White House recently announced a new deal between the United States and the European Union to roll back tariffs on European steel and aluminum.

In May of the following year, Trump continued work on updating the USMCA. Steel Dynamics CEO Mark Millett went on the record to say he believed a quota system would replace the current tariffs that the steel and aluminum industry were subjected to.

In July, Trump signed an order that would see the expansion of the use of American-made iron and steel in federal projects. The “Buy American” platform aimed to push the domestic content threshold from 50% to 95%.

While imports of steel and aluminum into the United States had declined since the tariffs were established in 2018, imports of products made with the same materials had a significant increase, according to Trump.

The expansion covered products made of steel and aluminum, such as nails, tacks, staples, cables, certain types of wire, bumpers and various car and tractor parts, among others.

Under the new program, specific products made of aluminum were subject to an additional 10% duty and certain steel products were tacked with a 25% tariff. However, Argentina, Australia, Canada (at the time) and Mexico were exempt from the expanded aluminum tariffs. Those countries, along with Brazil and South Korea, were also exempt from the new steel tariffs.

Most recently, at the beginning of the year, a group of several domestic steel industry associations penned a letter to President Biden, urging him to keep steel tariffs and quotas that were set in place by the Trump administration.

The letter was signed by the American Iron and Steel Institute, the United Steelworkers, the Steel Manufacturers Association, the Committee on Pipe and Imports and the American Institute of Steel Construction.

However, the letter notes, those plans suffered a significant setback because of the COVID-19 pandemic.

The organizations add that continuing the tariffs and quotes is “essential to ensuring the viability of the domestic steel industry in the face of this massive and growing excess steel capacity.”

Biden had previously told USW that he would keep the tariffs in place until a global solution to the excess production could be negotiated. However, just prior to receiving the letter, he again said that he would not make changes, pending consultations with U.S. allies.

Beginning Dec. 1, the U.S. has agreed to lift tariffs on some steel and aluminum imports arriving from Europe, as part of an agreement to easing trading between the two countries. The agreement sets a quota allowing a certain amount of steel and aluminum to be imported from the European Union duty-free, with anything above that level subject to existing tariffs.

As part of the agreement, the European Union has agreed to remove billions of dollars’ worth (25%, respectively) of retaliatory tariffs on bourbon, motorcycles and other American-made products that were previously slated to increase next month.

In addition, the two nations report that the agreement is open to any interested country that wishes to join and meets criteria for restoring market orientation and reducing trade in high-carbon steel and aluminum products.

Other arrangement details aim to:

“We appreciate the Biden administration’s continued recognition that the American steel industry is critical to our national and economic security, as well as its commitment to addressing the global steel overcapacity crisis and to combating unfair trade practices in the global steel sector,” said Kevin Dempsey, President and CEO of the American Iron and Steel Institute, said in a statement regarding the new deal.

“We hope that with the conclusion of this agreement, the United States and the EU will now work on a common action plan for challenging non-market industrial policies and other government interventions that fuel overcapacity in steel. We urge the U.S. and EU to take active steps to hold China and other countries that employ trade-distorting policies to account. We also believe U.S.-EU cooperation should focus on new trade approaches to address climate change, including through development of effective carbon border adjustment measures.”

While the deal is slated to aid several industries, Chuck Fowke, Chairman of the National Association of Home Builders, issued a press release of behalf of those in homebuilding, noting that despite these new efforts, the industry was still being negatively affected by the ongoing tariffs on Canadian lumber.

“U.S. Commerce Secretary Raimondo was quoted as saying the agreement with the European Union will 'provide relief in the supply chain and drive down cost increases.' But what about cost relief for millions of American home buyers and home owners who have seen the cost of housing rise by tens of thousands of dollars over the past year due in part to unprecedented lumber price volatility fueled by tariffs on Canadian lumber?

“Until a long-term solution can be reached, the administration needs to suspend duties on all imported building materials and goods, including Canadian lumber, to ease supply chain bottlenecks that are causing project delays and putting upward pressure on home prices,” said Fowke.