Last week, The Sherwin-Williams Company announced via emailed press release the winners of the 2021 Water and Wastewater Impact Awards. The awards recognize exceptional water and wastewater projects that have a compelling effect on industry with regard to public safety, asset protection and infrastructure life cycle improvement.

Additionally, eligible projects included any water-related structure that was new, restored and/or rehabilitated in 2020 using coating and lining materials from Sherwin-Williams Protective & Marine.

“The 2021 Sherwin-Williams Impact Award winners faced a range of difficult challenges, while successfully overcoming them to extend the service lives of critical infrastructure assets. That’s the kind of dedication we look forward to honoring each year via the program,” said Bryan Draga, Global Vice President – Marketing, Sherwin-Williams Protective & Marine.

“These winners have found optimal solutions to water and wastewater challenges that save time, labor and precious municipal budget dollars – not only in the execution of the coatings projects but also over the long term as these applied systems continue to prevent corrosion and enhance aesthetics.” 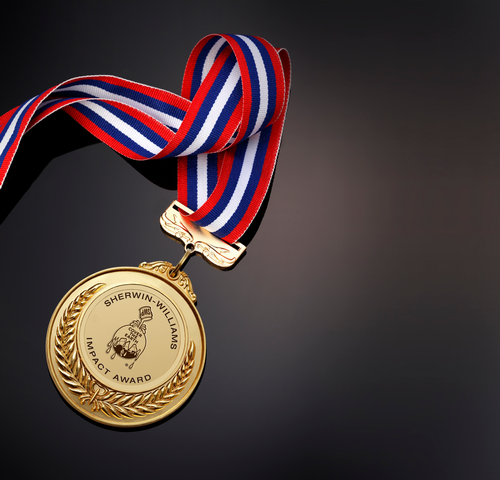 Sherwin called for submissions last year, covering projects from Jan. 1, 2020, through May 31, 2021. Such projects include water treatment, water storage, water transmission, sewer collection and wastewater treatment structures, and are not limited to highly visible structures.

This year, first place was awarded to the relining of a 1.3-mile-long penstock for the Devil Canyon Powerplant in San Bernardino, California. The runner-up project was the restoration of five surface water storage tanks in Holyoke, Massachusetts, and the 2021 honorable mention went to the restoration of an elevated water storage tank that celebrates actor Andy Griffith.

Relining the penstock’s interior was a “challenge,” according to Sherwin’s press release. The pipe itself ranged in diameter from 8 feet to 9.5 feet and plunged 1,200 vertical feet through the mountain terrain to meet the California Department of Water Resources Devil Canyon Powerplant.

Additionally, grades were 75% in spots, winds could reach up to 30 mph, access points were located 1,000 feet apart, entry ports were 30 inches wide and interior warmth needed to be maintained as it snowed outside. The pipeline is critical to Southern California’s water supply and power generation, so minimum downtime was required for the upgrade.

Surface preparation and lining applications were reportedly completed by crews working around the clock in a pair of approximately eight-week periods from January through March of both 2020 and 2021. Unified Field Services Corporation (Bakersfield, California) was contracted for the project.

For the project, the team needed a coating to comply with state regulations on volatile organic compound (VOC) emissions and that could be applied using equipment that would fit inside the penstock.

Two coats of Sher-Glass FF low VOC were applied at 15-20 mils dry film thickness per coat. Then, a gray primer coat and white finish coat were applied. The finish featured Sherwin Williams Opti-Check, which includes optimally activated pigments in the lining for inspectors to use ultraviolet light.

To apply these, K71FH2 Graco machines were used to move more than 10,000 gallons of coating material via spray lines up to 800 feet in length. Because of the narrow entry point, the equipment was broken down and reassembled to get it in and out of the penstock.

The first stage of the project was completed in January through March 2020, coating roughly one-third of the penstock. Relining was completed the following year, with teams using a wheeled BlastOne robot to clean the pipe’s interior.

Dehumidification equipment, ventilation and airflow systems were also placed in the pipe so that the coating team could work on the upper end while the blasting team prepped the lower segments. The temperature had to remain about 55 degrees Fahrenheit so the coating could perform properly, as well as ensure safe operation.

Additionally, rigging systems were installed in steep sections to allow the workers to apply the coatings without walking on the pipe’s surface. The blast robot was adapted to assist in moving the applicator pump when spraying coatings as well.

In 2020, the City of Holyoke, Massachusetts, was preparing to restore the deteriorating exteriors of four large-capacity surface water storage tanks that could in total hold 10 million gallons. A full restoration was required for all tanks based on visual assessments, including full containment, dry blasting and applying a three-coat protective system for $2.2 million.

According to the release, representatives from Sherwin-Williams Protective & Marine and Massachusetts-based engineering services firm Tighe & Bond then assessed the mold and mildew growth on the tanks, as well as areas of damaged or peeling paint.

Using a 5,000-psi pressure washer in accordance with the SSPC SP-WJ4 Waterjet Cleaning of Metals –Light Cleaning method and then SSPC SP-6 Commercial Blast Cleaning on select areas, it was revealed that the coating surface had minimal signs of corrosion and the existing coating was still tightly adhered to four of the five tanks.

Because of this new assessment, four of the five tanks could be restored using a two-coat overcoat system instead, removing the need for full containment and dry blasting to bare metal. This saved the city over $1.2 million on the originally estimated cost.

Champion Painting Specialty Services Corp. then pressure washed the tanks, then performed SSPC SP-6 (WAB) Commercial Wet Blast Cleaning on any areas of spot corrosion and feathered the edges of remaining coatings to provide a good tie-in for the overcoat layers.

Areas blasted to bare metal were spot primed with Macropoxy 646. Applicators then applied a full coat of Macropoxy 920 Pre-Prime on the entire tank, followed by a topcoat of Sher-Loxane 800.

The fifth tank, which required full restoration, was prepared using vapor blasting to the SSPC SP-6 (WAB) Commercial Wet Blast Cleaning standard to forgo the use of a full containment system. Zinc Clad 4100 was applied for corrosion protection, followed by an intermediate coat of Macropoxy 646 and a topcoat of Sher-Loxane 800. All five tank restorations were completed in July 2021.

Then, Macropoxy 920 PrePrime was applied to affected areas at 1 to 1.5 mils DFT, followed by Macropoxy 646 to protect from corrosion. The crew used brushes and rollers rather than sprayers to avoid overspray landing in the nearby residential neighborhood.

A Sher-Cryl HPA topcoat was sprayed at 2 to 3 mils DFT, due to the fast-drying droplets becoming solid before they would land on houses or cars. The artwork, which was originally applied by artist Jeremy Sams, was recreated by an applicator from Southern Corrosion using acrylic Sher-Cryl HPA coating.

In total, Sherwin reports that roughly 200 gallons of coatings were used in the three-week project that was completed in October 2020.

In 2020, The Sherwin-Williams Company announced a labor-intensive restoration of eight deteriorated membrane bioreactor (MBR) basins for the South Valley Sewer District Jordan Basin Water Reclamation Facility as the winner of the 2020 Impact Award. The facility is located in Bluffdale, Utah.

Six years after project managers decided not to line the eight concrete basins that make up the MBR at SVSD’s new Jordan Basin Water Reclamation Facility due to budgetary restrictions, officials witnessed the corrosive membrane filter cleaning process had caused the loss of one-quarter to three-quarter inches of concrete throughout the basins sooner than expected.

According to the release, the citric acid and sodium hypochlorite used to remove unwanted elements from the filter membranes had progressively eaten away at the unlined basin walls.

Before the SVSD could install linings, however, the project required an investigation into the accelerated corrosion, an evaluation of the potential coating systems, the development of a contract to address the materials, procedures and quality control for the restoration work. For the investigation, SVSD retained Bowen Collins & Associates (Draper, Utah) as the design engineer, who then called on corrosion engineering firm Corrosion Control Technologies (Sandy, Utah) to assist on the project as a subconsultant.

Once the concrete achieved an even plane, applicators turned to the reinforced lining system which included applying a base layer of Sherwin-Williams Dura-Plate UHS Clear Laminate topped with a 1.5-ounce fiberglass mat that was then sealed with more of the clear laminate material before being topcoated with Dura-Plate UHS Epoxy White.

During the application process, the engineering team was reported to have used a green-tinted hardener with the clear laminate, making it easier for applicators and inspectors to ensure the fiberglass matting was fully wetted during applications. The rehabilitation and lining application reportedly returned the basins to like-new condition, complete with a more durable barrier.

All eight MBR basins were completed in about 57 weeks, three weeks ahead of the 60-week completion time frame and didn’t interrupt facility operations throughout the project, enabling it to continue serving the surrounding area with water filtered for use in secondary irrigation systems.

The runner-up for the competition went to a similar endeavor featuring a different lining solution for MBR basins at the Grand Forks Regional Water Treatment Plant for the City of Grand Forks, North Dakota. While applicators from Champion Coatings (San Diego) installed a flexible polyurethane lining system in five newly installed basins, Traill Painting Company (Fargo, North Dakota) coated a wide array of assets for the plant, including applying a heavy duty, graphite-filled lining system on a secondary containment vessel, installing resinous flooring throughout the facility, and coating pipes, tanks, walls, doors and numerous other structures.