The facility is located in Bluffdale, Utah.

Projects eligible for nomination included any water-related structure that was new, restored and/or rehabilitated in 2019 and was completed using coating and lining materials from Sherwin-Williams Protective & Marine. Besides tanks and towers, eligible structures include water treatment and storage facilities, transmission structures, sewer collection and wastewater treatment facilities. 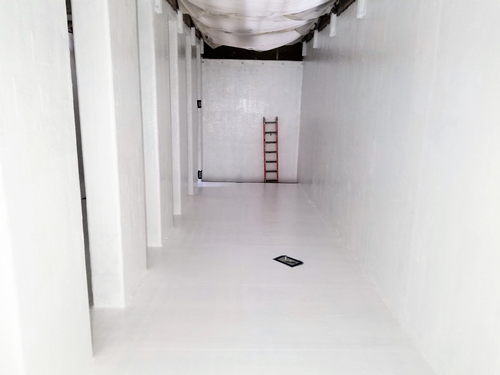 According to Sherwin-Williams, the program recognizes application contractors, specifiers and owners for excellence on North American water and wastewater projects that have a compelling effect on the industry regarding public safety, asset protection and infrastructure life cycle improvement.

“As we see in this year’s first place and runner-up projects, there are multiple ways to address similar challenges, with the best solution dependent on the particular project. Through the Impact Award program, we take pride in honoring the problem solvers who find ways to ensure the proper care and upkeep of critical water and wastewater infrastructure to continually deliver safe, reliable service in communities across North America.”

Six years after project managers decided not to line the eight concrete basins that make up the MBR at SVSD’s new Jordan Basin Water Reclamation Facility due to budgetary restrictions, officials witnessed the corrosive membrane filter cleaning process had caused the loss of one-quarter to three-quarter inches of concrete throughout the basins sooner than expected.

According to the release, the citric acid and sodium hypochlorite used to remove unwanted elements from the filter membranes had progressively eaten away at the unlined basin walls.

Before the SVSD could install linings however, the project required an investigation into the accelerated corrosion, an evaluation of the potential coating systems, the development of a contract to address the materials, procedures and quality control for the restoration work. For the investigation, SVSD retained Bowen Collins & Associates (Draper, Utah) as the design engineer, who then called on corrosion engineering firm Corrosion Control Technologies (Sandy, Utah) to assist on the project as a subconsultant.

Once the concrete achieved an even plane, applicators turned to the reinforced lining system which included applying a base layer of Sherwin-Williams Dura-Plate UHS Clear Laminate topped with a 1.5-ounce fiberglass mat that was then sealed with more of the clear laminate material before being topcoated with Dura-Plate UHS Epoxy White.

During the application process the engineering team was reported to have used a green-tinted hardener with the clear laminate, making it easier for applicators and inspectors to ensure the fiberglass matting was fully wetted during applications. The rehabilitation and lining application reportedly returned the basins to like-new condition, complete with a more durable barrier.

All eight MBR basins were completed in about 57 weeks, three weeks ahead of the 60-week completion time frame and didn’t interrupt facility operations throughout the project, enabling it to continue serving the surrounding area with water filtered for use in secondary irrigation systems.

The runner up for the competition went to similar endeavor featuring a different lining solution for MBR basins at the Grand Forks Regional Water Treatment Plant for the City of Grand Forks, North Dakota. While applicators from Champion Coatings (San Diego) installed a flexible polyurethane lining system in five newly installed basins, Traill Painting Company (Fargo, North Dakota) coated a wide array of assets for the plant, including applying a heavy duty, graphite-filled lining system on a secondary containment vessel, installing resinous flooring throughout the facility, and coating pipes, tanks, walls, doors and numerous other structures.