According to a release from the Naval Sea Systems Command (NAVSEA), the Norfolk Naval Shipyard in Portsmouth, Virginia, has been named the Center of Excellence for inspecting and servicing anchor chains for the United States Navy. NNSY is the U.S. Navy’s oldest shipyard and the largest on the East Coast.

Within the shipyard, Shop 11F, Shop 71 and Shop 72 work together to service chains for submarines and other vessels in the Navy’s fleet by forging, painting and rigging, respectively.

“Without these chains being in top condition, these vessels cannot deploy where they are needed so it’s important that we do our part to keep them in service and ready to go,” said Metal Forger Jesse Dalton.

When a chain is delivered to NNSY, it is brought into the shop to begin stripping the paint with the wheelabrator and cleaning it for service. A lead mechanic then reportedly performs and inspection on the chain for refurbishment.

NAVSEA reports that Shop 11F houses the chains and performs the inspections, and then coordinates with Shop 72 when riggers and crane operators are needed to perform lifts. Additionally, Shop 71 makes sure that the chains are painted under specific conditions. 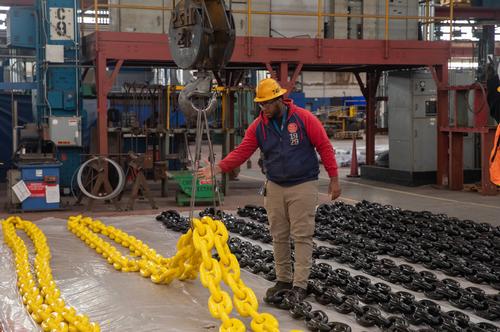 Photos: NAVSEA
According to a release from the Naval Sea Systems Command (NAVSEA), the Norfolk Naval Shipyard in Portsmouth, Virginia, has been named the Center of Excellence for inspecting and servicing anchor chains for the United States Navy.

“It’s a lot of coordination and teamwork in order to get a chain operational and ready to return to its vessel,” said Metal Forger Eric Lynch. “Each of us plays an important role in order to get the job done.”

This past winter, the team completed one of its “most complex jobs” on a USS Philippine Sea (CG-58) anchor chain. According to the release, NNSY was able to overcome the challenges presented and succeed in its refurbishment.

“During COVID-19, we saw a decline of forging work within the yard and we wanted to ensure that we were doing our part in service to our fleet,” said Shop 11F Metal Forger Leader John Sales. “We’ve been working hard to complete these chain jobs and look into tackling new challenges for our team.

“Now we’re even looking at returning to anchor chain work for the carriers, testing our skills with a chain for the USS John C. Stennis (CVN 74). This is work the shipyard hasn’t done in more than 10 years, and it’s something those on my team haven’t tackled before. But we’re ready and willing to build up our capabilities to get the job done.”

For the USS John C. Stennis project, working on the chains, or shots, that were 85 to 95 feet in length with each link weighing 300 pounds provided a challenge to the NNSY team.

“I’d say the shots are three times as heavy as anything else we work on,” Sales said in an interview. “When a link weighs 300 pounds, a steel-toe boot isn’t going to help much if your foot’s there; if it falls on your hand it’s going to be bad.”

The shots were reportedly moved across the floor with the rigger’s overhead bridge crane, using pry bars to position the links in the different positions needed for the forger’s inspection. The team employed new, 5-foot pry bars to keep their hands and feet clear.

The wheelabrator, which acts like a “giant washing machine,” uses steel shot to blast off old paint and rust. From there, the mechanics will check to see if corrosion or wear have eaten away too much of the metal on any link using a set of gauges.

Additionally, they look to see if the links have stretched too far, look for cracks and search for any sign of surface wear or metal fatigue. The riggers can lift a shot into the air, allowing them to also use a hammer to listen for sounds that tell them the metal inside remains solid.

However, if a link is bad, the forge team will cut the sides with a torch to free the links on either side and then replace it with another link. A whole shot can be rejected and the vessel would be required to order a new one if enough links don’t meet specifications.

After passing inspection, the team then moved the chains back to the wheelabrator to remove any flash corrosion due to the nearby water before painting. The shots are afterwards moved to an area for the painters with spray equipment and protective cloths.

“When a job comes up, we all step up to do our part to get the job done with first-time quality so the chains can get back to what they are intended to do,” said Dalton.

Reported to be a fully enclosed 7 feet by 8 feet by 14 feet cubic blasting area, the Critical Coat Blast Booth is environmentally controlled using heating, ventilation and air conditioning equipment used to meet surface preparation requirements. This is achieved through the equipment’s use of media to physically blast different metals such as steel or aluminum surfaces.

Due to its rugged design, the blast booth is primarily designed to use aluminum oxide blast media but can blast other types of media as well. Thanks to the equipment’s light efficiency bag-filter house, blast grit light enough to be lifted through the air is filtered out, while also saving energy through its ability of not having to recondition the air.

As for materials heavier than the air, these items then fall through the floor grates and are swept to a reclaim system, which then sifts, strains and separates blast media from undesired items such as dust, bolts, wire-ties and anything too large. This replenishment is accomplished through the addition of new media through the floor sweepers.

To access the booth, users can enter by using a personnel door on the side and fully opening double doors on the end. Code 970 Inside Shops Preservation Zone Manager Tracy Robinson expanded on the booth’s design, stating that the equipment is vital in supporting smaller critically coated jobs, which are described as being components removed from the ship from “critically coated areas” that are not accessible for preservation when the vessel is underway or in service.

In addition, these components are also critical in the sense that once they are exposed to harsh environments, they become very corrosion prone once introduced to a fully submerged area such as a potable water tank, which holds water for the crew’s drinking water and water used for food preparation.