In adopting a Critical Coat Blast Booth, Shop 71 says that it has already noted improvement in energy savings, material costs and reports that the equipment will require fewer working hours to complete various painting and blasting operations.

About the Blast Booth

Reported to be a fully enclosed 7 feet by 8 feet by 14 feet cubic blasting area, the Critical Coat Blast Booth is environmentally controlled using heating, ventilation and air conditioning equipment used to meet surface preparation requirements. This is achieved through the equipment’s use of media to physically blast different metals such as steel or aluminum surfaces.

“Having the ability to set temperatures in the new blast booth and controlling the dehumidification and air conditioning capabilities inside the booth prevents moisture in the air from settling on the newly blasted surfaces ensuring the highest quality of surface preparation and cleanliness prior to applying the required coatings,” said Code 970 Preservation Supervisor Daniel Gurganus. “Being able to maintain air and surface temperatures, relative humidity percentages, and dew point temperatures by the flip of a switch prevents coating failures, which are timely and costly.” 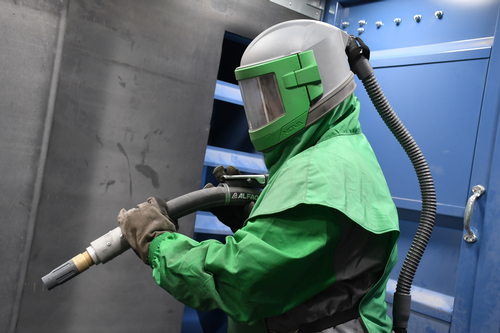 Due to its rugged design, the blast booth is primarily designed to use aluminum oxide blast media but can blast other types of media as well. Thanks to the equipment’s light efficiency bag-filter house, blast grit light enough to be lifted through the air is filtered out, while also saving energy through its ability of not having to recondition the air.

As for materials heavier than the air, these items then fall through the floor grates and are swept to a reclaim system, which then sifts, strains and separates blast media from undesired items such as dust, bolts, wire-ties and anything too large. This replenishment is accomplished through the addition of new media through the floor sweepers.

To access the booth, users can enter by using a personnel door on the side and fully opening double doors on the end. Code 970 Inside Shops Preservation Zone Manager Tracy Robinson expanded on the booth’s design, stating that the equipment is vital in supporting smaller critically coated jobs, which are described as being components removed from the ship from “critically coated areas” that are not accessible for preservation when the vessel is underway or in service.

In addition, these components are also critical in the sense that once they are exposed to harsh environments, they become very corrosion prone once introduced to a fully submerged area such as a potable water tank, which holds water for the crew’s drinking water and water used for food preparation.

“Normally, we would have to build containments and have dehumidifiers installed to maintain relative humidity/temperatures in order to perform smaller work coming from the waterfront,” said Robinson. “The material cost not having to build temporary containments to accomplish the many different small critical coating jobs is very beneficial to NNSY.”