The Organization for Economic Cooperation and Development (OECD) recently released a report on the commercial availability and current uses of per- and polyfluoroalkyl substances found in various paints, coatings and varnishes.

The OECD is an intergovernmental organization where representatives of 38 industrialized countries in North and South America, Europe and the Asia and Pacific region, as well as the European Commission, meet to coordinate and compile policies, discuss issues of mutual concern and work together to respond to international problems.

Most work carried out by the OECD is completed by more than 200 specialized committees and working groups. For the PFAS study, titled “Per- and Polyfluoroalkyl Substances and Alternatives in Coatings, Paints and Varnishes,” the organization looked at coatings used for cables, wires, solar panels, homes, bridges and other materials.

The establishment of the OECD/UNEP Global PFC Group was noted by the Strategic Approach to International Chemicals Management Framework in 2012 and has since been requested to facilitate the exchange of information on PFAS and support a global transition towards safer alternatives.

According to the report, in order to assess the uses of PFAS and their alternatives in CPVs, the OECD was required to go into sufficient detail to understand the function of PFAS in specific applications, rather than generalizing at the sector or market segment level.

In making this observation, coatings for cables and wiring, coatings used on the front and backsheets of solar panel, and household and architectural paints were examined more closely, with the majority identifying as fluoropolymers. 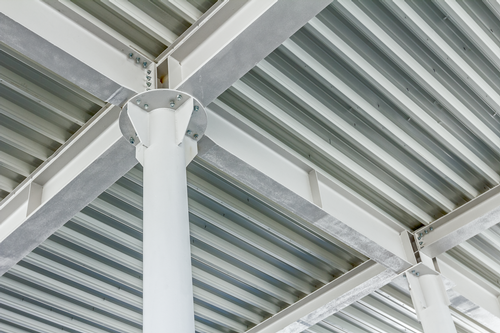 roman023 / Getty Images
The Organization for Economic Cooperation and Development (OECD) recently released a report on the commercial availability and current uses of per- and polyfluoroalkyl substances found in various paints, coatings and varnishes.

In numerical findings, such as use and market data, the report found that aerospace equipment and other high-performance products use the chemicals on products such as cables and wires about 10% of the time. Additionally, there is a significant cost differential between using FPs or alternatives, and FPs are chosen only as a last resort where performance requirements necessitate their use.

Looking at PFAS in solar coatings, the report noted that available alternative chemicals and materials, such as glass, polyester, polyamides and polyethylene terephthalate, don’t perform as well. Publicly available market penetration data had not been identified, however.

And, in further observing infrastructure and architecture PFAS coatings, the OECD found that overall market penetration for FPs in architectural protective coatings is very low, reporting approximately 1% compared to alternatives at 99%.

As a result of the findings, the OECD concludes that more information on the markets for these chemicals and their risks is needed and has recommended the following:

A copy of the full report can be viewed here.

The EPA has been releasing clusters of PFAS news over the past year and now into 2022. In June, it announced three actions, including issuing the proposed rule that it said is designed to gather comprehensive data on more than 1,000 PFAS manufactured in the United States, withdrawing guidance that weakened EPA’s July 2020 Significant New Use Rule restricting certain long-chain PFAS and publishing a final rule that incorporates three additional PFAS into the Toxics Release Inventory.

The rule is a statutory requirement under the FY2020 National Defense Authorization Act that would require all manufacturers (including importers) of PFAS in any year since 2011 to report information related to chemical identity, categories of use, volumes manufactured and processed, byproducts, environmental and health effects, worker exposure and disposal.

The EPA said that this will help the agency understand the sources and quantities of PFAS in the U.S. and support the agency’s PFAS research, monitoring and regulatory efforts. Once finalized, this rule would reportedly be the first targeted effort under the Toxic Substances Control Act to collect information on the manufacture of PFAS.

To assist stakeholders in determining whether or not they have a reportable chemical, the EPA will provide examples, exemption notices and structural diagrams. The proposed deadline for reporting PFAS data to EPA was one year following the effective date of the final rule.

In addition to the new reporting action, the EPA withdrew a compliance guide that it says weakened the July 2020 Significant New Use Rule—this is in accordance with the Biden-Harris administration. The SNUR prohibits companies from importing certain long-chain PFAS as part of a “surface coating” on articles without prior EPA review and approval.

The EPA noted that the guide was issued in January, in the last days of the Trump administration and aimed to limit what would be considered “surface coating.” The guide also was never opened to public comments, the EPA added, saying that it determined that the guide “inappropriately narrowed the scope and weakened the prohibitions included in the SNUR.”

That guide has been removed and is no longer in effect.

Lastly, the EPA had taken the next step to implement a PFAS requirement of the NDAA. The NDAA provided a framework for additional PFAS to be added to TRI on an annual basis. For TRI Reporting Year 2021 (reporting forms due by July 1, 2022), the NDAA has added three PFAS to the TRI list because they are now subject to a SNUR under TSCA.

Per the NDAA requirements, the PFAS additions became effective as of Jan. 1, 2021. Reporting forms for these PFAS will be due to EPA by July 1, 2022, for calendar year 2021 data.

At the beginning of that same month, President Joe Biden submitted his budget request of $11.2 billion for the EPA. The budget breakdown included a provision for PFAS, namely that $75 million will go to accelerate toxicity studies and fund research to inform the regulatory developments of designating PFAS as hazardous substances while setting enforceable limits for PFAS.

That same month, the EPA issued two new updates in emailed press releases, both extending the public comment period for its proposed recordkeeping requirements and releasing data from the 2020 Toxics Release Inventory regarding chemical releases, chemical waste management and pollution prevention activities that took place during 2020 at nearly 21,000 federal and industrial facilities across the country.

The preliminary data reportedly includes the first-ever reporting on PFAS added to the TRI by the 2020 National Defense Authorization Act. The EPA noted that the dataset released is raw data and did not contain any summary or trend analysis. The EPA planned to conduct additional quality checks on the preliminary data.

According to the EPA, the decision to initiate the three new rulemakings arrives after concluding several studies previously discussed in its Effluent Guidelines Program Plan 14. The agency has determined that revised effluent limitations guidelines (ELGs) and pretreatment standards are warranted for:

In November, Regan announced the creation of the Agency’s PFAS Strategic Roadmap to address contamination and set a series of timelines for the EPA to take specific actions and set bolder policies regarding PFAS. In addition, the plan also pledges to conduct more research and testing on hundreds of other PFAS, potentially listing additional compounds as hazardous substances in the future to better safeguard public health, protect the environment and hold polluters accountable.

By 2023, the roadmap aims to set a final rule for PFOS and PFOA regulation in drinking water and will designate two compounds as hazardous substances. That same year, the Agency intends to provide updated research on the available methods for disposing of or destroying PFAS through landfills, thermal treatment and deep-well injection.

According to the White House, the PFAS Strategic Roadmap is just one part of the nation’s plan to combat PFAS contamination. On the same day the roadmap was announced, the Biden Administration issued a multi-agency plan regarding PFAS pollution.

In a combined effort by agencies, including the EPA, the Department of Defense, the Food and Drug Administration, the U.S. Department of Agriculture, the Department of Homeland Security and the Department of Health and Human Services, actions will be taken to prevent PFAS from being released into the air, drinking systems and food supply and to expand cleanup efforts to remediate the impacts of PFAS pollution.

At the end of November, the EPA asked its Science Advisory Board to review draft documents regarding health effects PFAS. The request for review was a result of recent scientific data regarding the negative health effects of lower levels of PFOA and PFOS than previously understood and that PFOA is likely a carcinogen.

According to the EPA, following peer review, this information will be used to develop Maximum Contaminant Level Goals and a National Primary Drinking Water Regulation for PFOA and PFOS. The agency is also seeking independent scientific review of these documents.

In December, the EPA granted a petition from six North Carolina public health and environmental justice organizations to order company testing on human health hazards regarding certain PFAS. At the time, the Agency also agreed to exercise its TSCA authorities to compel development of information on PFAS.

In the future, the EPA plans to require PFAS manufacturers to provide the agency with toxicity data and information on categories of PFAS. In addition, the Agency also expects to exercise its TSCA section 4 order authority to require recipients of test orders to conduct and fund the studies.

The collection of PFAS data will help the Agency to better understand the impacts of PFAS, including potential hazards, thus helping the EPA to continue to take action to protect human health and the environment.

And in January, the OECD hosted a webinar presenting recent risk reduction initiatives for PFAS, which featured presentations from the EPA, the European Commission and the Secretariat of the Basel, Rotterdam and Stockholm Convention. The archived webinar can be viewed here.

According to Bloomberg, the EPA is required to propose a rule to collect 10 years of chemical use, production volume, disposal and other data on PFAS by early next year. The agency’s Office of Inspector General is investigating a July 2020 regulation increasing the EPA’s oversight over imported products coated with some PFAS.