A team of researchers from the Department of Nano-Bio Convergence of the Korea Institute of Materials Science recently reported that they’ve developed a material that provides antibacterial and antiviral properties without changing the physical properties of various products that are commonly used.

According to the team, while antibacterial films and antibacterial coating products are widely used for elevator buttons, door handles and touch screens, they are difficult to maintain long-term antibacterial durability of the material because of the low transparency and damages caused by frequent use.

The application of antibacterial films and coatings also requires an additional process of attaching or producing a film to an existing product. 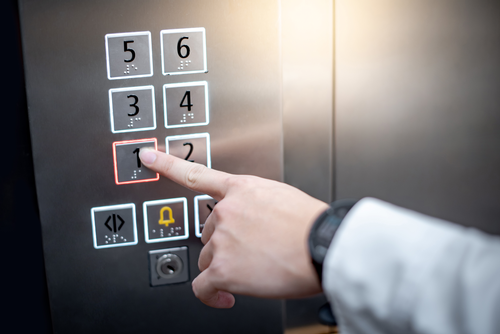 Zephyr18 / Getty Images
A team of researchers from the Department of Nano-Bio Convergence of the Korea Institute of Materials Science recently reported that they’ve developed a material that provides antibacterial and antiviral properties without changing the physical properties of various products that are commonly used.

To mitigate this issue, the research team developed an antibacterial/antiviral additive capable of generating high metal ions. By about 1 to 2 weight percent (wt%) of the additive to various resins, the antibacterial properties reportedly increased to 99.99%, while the antiviral properties were reported to be more than 10 times in two hours without changing optical/mechanical/thermal properties of existing products.

The team reports that the antibacterial/antiviral additive is composed of non-toxic substances without organic antibacterial agents and nano compounds. In addition, when used as an additive, the material can carry out ultraviolet and heat curing processes without additional processing on existing products.

“We are conducting mass-production tests together with some companies who would use the material,” Kim concluded. “We will spare no effort to tackle new infectious diseases for the post-COVID-19 era when people's interest in personal hygiene will greatly increase.”

This research achievement was funded by the Ministry of Science and ICT and supported by KIMS. The research team is currently working on commercializing the technology by promoting the establishment of a research institute spin-off company.

“KIMS will continue to discover excellent ideas that have commercial potential and make efforts to materialize and commercialize rapidly from the market point of view,” said Jung-hwan Lee, the President of KIMS. “We will do our best to support and encourage the researchers so that we can localize the functional antibacterial/antiviral materials and enter the overseas markets.”

In May 2020, researchers from the Hong Kong University of Science and Technology announced that they had developed a multilevel antimicrobial polymer (MAP-1) coating that they claimed to be effective in killing viruses, bacteria and spores.

The coating was developed by a team led by professor Yeung King-lun, of the Department of Chemical and Biological Engineering and the Division of Environment and Sustainability.

While the coating has been confirmed to be effective against drug-resistant microorganisms in the healthcare space (including two field studies in the Kowloon Hospital and Haven of Hope Woo Ping Care and Attention Home), the team was also working with the Water Supplies Department and the Drainage Service Department to field test the coating in infrastructure projects as well.

According to the university: “MAP-1 coating provides lasting protection and surface disinfection against microbial contamination. This product is designed for use on different surfaces including metals, concrete, wood, glass, plastics as well as fabrics, leathers and textiles without changing the materials’ appearance and tactile feel.

The coating reportedly prevents microbial adhesion on a surface by using the special blend of antimicrobial polymers, effectively killing “99.9% of bacteria and viruses.”

The university noted that in an effort to combat COVID-19, it has collaborated with Chiaphua Industries Limited to apply the coating in 70 daycare centers, elderly homes, schools, malls, buses, churches and sports facilities.

Around the same time, researchers at University College London were reported to have developed a coating that activates in low-intensity light to kill bacteria. Published in Nature Communications, researchers claim that use of the coating could help stop the spread of healthcare-associated infections (HCAIs) and disease.

The team of chemists, chemical engineers and microbiologists created the bactericidal coating using a scalable method and tested how well it killed S. aureus and E. coli against control coatings and under different lighting conditions.

Surfaces were treated with either the bactericidal coating or a control coating “before being inoculated with 100,000 colony forming units per ml of either S. aureus and E. coli. The growth of the bacteria was investigated under dark and white light conditions between 200 – 429 lux.”

The research was funded by the Engineering and Physical Sciences Research Council, through the Advanced Flow Technology for Healthcare Materials Manufacturing project.

Later that year, in December, it was announced that diversified natural resources company, Teck Resources Limited (Vancouver, Canada) would be testing its antimicrobial copper coatings on high-touch transit surfaces.

The project was dubbed as the first of its kind on a transit system in North America and was being conducted in partnership with TransLink, Vancouver Coastal Health, VGH & UBC Hospital Foundation, Coalition for Healthcare Acquired Infection Reduction, and the University of British Columbia.

Through the company’s Copper & Health Program, Teck believes that as a major copper producer it can help to increase the use of antimicrobial copper in both healthcare facilities and public spaces to reduce the spread of infections, in addition to raising awareness and improving health outcomes for those most at risk.

According to Teck, copper alloy surfaces are naturally antimicrobial with self-sanitizing properties, with research showing that these surfaces eliminate up to 99.9% of harmful bacteria and viruses. In its latest pilot project, fully funded by the company itself, will host a four-week-long initial phases where various copper surfaces will be installed on two buses on high-ridership routes and two SkyTrain cars in Vancouver.

An organosilane surface preservative will also be tested that has the potential to control and/or prevent the growth of microorganisms on treated surfaces.