Researchers at University College London have reportedly developed a coating that activates in low-intensity light to kill bacteria.

Recently published in Nature Communications, researchers claim that use of the coating could help stop the spread of healthcare-associated infections (HCAIs) and disease.

UCL says that the research is the first to show a light-activated antimicrobial coating successfully killing bacteria in low intensity, ambient light (300 lux), such as that found in wards and waiting rooms. Previously, similar coatings needed intense light (3,000 lux) to activate their killing properties. 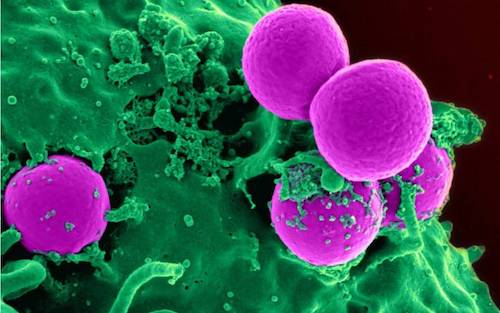 National Institutes of Health
Researchers at University College London have reportedly developed a coating that activates in low-intensity light to kill bacteria.

“Dyes such as crystal violet are promising candidates for killing bacteria and keeping surfaces sterile as they are widely used to disinfect wounds,” said first author Gi Byoung Hwang, a professor of UCL chemistry.

“When exposed to bright light, they create reactive oxygen species, which in turn kill bacteria by damaging their protective membranes and DNA. This is amplified when they are paired with metals such as silver, gold and zinc oxide.”

The team of chemists, chemical engineers and microbiologists created the bactericidal coating using a scalable method and tested how well it killed S. aureus and E. coli against control coatings and under different lighting conditions.

Surfaces were treated with either the bactericidal coating or a control coating “before being inoculated with 100,000 colony forming units  per ml of either S. aureus and E. coli. The growth of the bacteria was investigated under dark and white light conditions between 200 – 429 lux.”

The team discovered that the coating kills bacteria by producing hydrogen peroxide and works by chemically attacking the cell membrane.

“The gold clusters in our coating are key to generating the hydrogen peroxide, through the action of light and humidity,” said senior author and professor Asterios Gavriilidis, UCL Chemical Engineering.

“Given the clusters contain only 25 atoms of gold, very little of this precious metal is required compared to similar coatings, making our coating attractive for wider use.”

The research was funded by the Engineering and Physical Sciences Research Council, through the Advanced Flow Technology for Healthcare Materials Manufacturing project.