To avoid construction materials noted to have “embodied carbon,” researchers from the Massachusetts Institute of Technology have developed a set of computational tools to assist architects and engineers.

Embodied carbon is the carbon dioxide emissions associated with materials and construction processes throughout the whole lifecycle of a building or infrastructure. It includes any CO2 created during the manufacturing of building materials (material extraction, transport to manufacturer, manufacturing), the transport of those materials to the job site and the construction practices used.

According to researchers at MIT, wood generally produces a much smaller carbon footprint as compared to steel and is noted to perform very well under forces of compression. However, steel is known to out-perform wood and other materials when it comes to tension.

From an emissions standpoint, Josephine Carstensen, an assistant professor of civil and environmental engineering and coauthor of a paper on the research, believes that architects and engineers should be opting for timber materials if the structure being built doesn’t have any tension. Carstensen also noted, that in selecting the wood material for these particular structures, steel could then be used for applications where its properties provide maximum benefit. 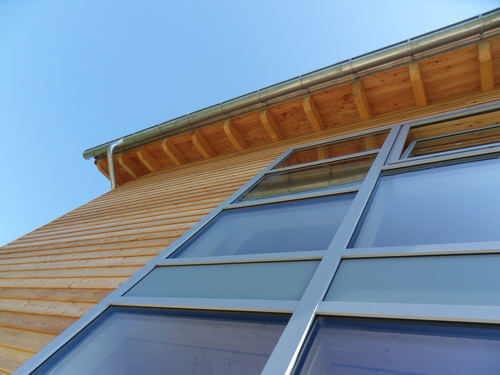 PHG Pictures / Getty Images
To avoid construction materials noted to have “embodied carbon,” researchers from the Massachusetts Institute of Technology have developed a set of computational tools to assist architects and engineers.

The conclusion was made after MIT researchers looked into the construction of truss structures and what materials would minimize the structures’ embodied carbon while maintaining the properties a building needs.

To compare the difference, researchers utilized a new system technique called topology optimization. According to MIT, the technique works to produce designs optimized for different characteristics given parameters such as the dimensions of the structure and the load to be supported.

In a proposal they developed for reengineering several trusses, the researchers showed that savings of at least 10% in embodied emissions could be achieved with no loss of performance.

“It’s about choosing materials more smartly,” Carstensen concluded. In the future, she hopes that the results of the study could encourage a positive trend toward increasing use of timber in large construction projects.

While there will continue to be a debate over what materials will serve a project better when it comes to carbon footprints, compression and tension, other cities and associations have been noted to make a push for the construction of lumber-based structures.

Late last year, the New York City Department of Buildings announced the official passage of major legislation in the City Council to update the city’s Construction Codes with the aim of keeping the city on the forefront of building safety and innovation.

In deciding on what revisions to make to the city’s codes, technical committees used the highest international standards for the design, construction and maintenance of buildings as a baseline. The committees were reportedly comprised of engineers, architects, attorneys, planners, tradespeople, representatives of the construction industry, labor, real estate industry and utility companies, as well as DOB and interagency stakeholders.

According to the DOB, there are more than 600 revisions and changes being made to the city’s codes. Most of the updates are slated to go into sometime this year, although some updated regulations have already taken effect on Jan. 1.

Additional changes are also slated to be made to sustainability and resiliency enhancements. The highlights from this section include:

By approving the use of mass timber in construction of buildings of up to 85 feet tall (six to seven stories tall), the city will be better equipped to become a leader in carbon sensitive large and tall wood building. The new mass timber construction codes include the use of cross-laminated timber as a structural material for low- and medium-rise buildings.

The revision to the city's codes follows an update to the International Building Code (IBC) by the International Code Council (ICC) earlier this year that allows mass timber buildings of up to 270 feet tall. In 2020, the two released a joint publication: Mass Timber Buildings and the IBC, which aims to provide an overview of requirements for mass timber construction as found in the 2015, 2018 and 2021 IBC.

Since that publication was released, in April 2021, the Softwood Lumber Board announced that the WoodWorks – Wood Products Council and resource firm Think Wood released the inaugural Mass Timber Design Manual.

The free, interactive resource aims to offer a comprehensive collection of the most up-to-date information on topics from mass timber products and design best practices, to taller wood construction and sustainability. Funding for the manual was provided by the SLB.

The Manual includes WoodWorks technical papers along with Think Wood’s continuing education articles as well as case studies, Q&As, technical guides and other tools, including:

According to the Board, users can either view each individual resource or download the folder for all of the files.

Some years prior to that, in 2018, Oregon became the first state to codify timber high-rises. The Building Code Division issued an addendum to the Statewide Alternate Method—an Oregon program that allows for alternative building techniques to be used after an advisory council has approved the method—detailing the new classifications of timber buildings, of which there are three.

The three new types of construction are all organized under Type IV, more commonly referred to as “heavy timber.” They are:

The addendum goes on to say that the “statewide alternate method intentionally reinforces the notion that the state building code is not a barrier to innovation or any method, technique or material of construction that is supported by scientific findings, while further preserving Oregon’s ability to serve as a single place to obtain statewide approval, providing a predictable regulatory system of business.”

The addendum follows a number of suggestions made by the International Code Council’s Ad Hoc Committee on Tall Wood Buildings. Other suggestions included introducing standards and best practices for fireproofing, the load-bearing potential of cross-laminated timber and heavy timber, water resistance, sealing and seismic ratings.