In the weeks following the tornado that killed six people at an Amazon facility in Edwardsville, Illinois, state lawmakers have announced that they will be considering statewide standards for warehouse construction.

In a statement, Governor J.B. Pritzker was quoted on the topic, saying, “The question is, with all the warehouses that are being built or have been built, should we be setting a state standard for that? That’s something that no doubt will be explored during this session of the General Assembly.

“We should be looking at whether we should be creating statewide standards. We don’t have that now. They’re really done on a county by county or municipality basis.”

Around 8:30 p.m. on Dec. 10, a tornado rated EF-3 tore through a 1.1-million-square-foot Amazon fulfillment center, causing the structure’s concrete walls to topple and the roof to collapse. During the storm, wind speeds were reported as being as high as 150 miles per hour.

Six people were killed in the collapse and another employee experienced serious injuries.

During rescue efforts, emergency responders described various challenges faced during the chaotic event. In a written testimony, Edwardsville’s Fire Chief James Whiteford reported that local emergency crews needed to reach out for resources to rescue trapped workers and had asked for more money for disaster training.

“[Emergency services] need built-in redundancy in order to ensure response capabilities are there when they are needed,” Whiteford wrote. “Whether it is from the next tornado, earthquake, ice storm or terrorist attack, adequate funding is essential to ensure this capability.” 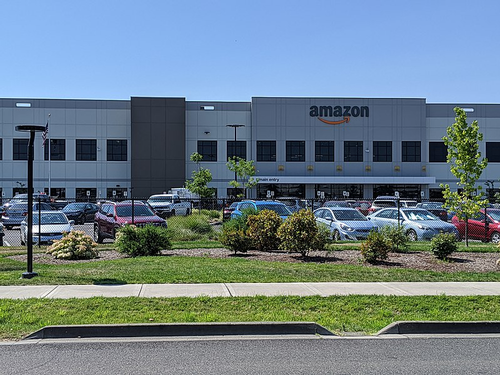 Tedder, CC-BY-SA-4.0, via Wikimedia Commons
In the weeks following the tornado that killed six people at an Amazon facility in Edwardsville, Illinois, state lawmakers have announced that they will be considering statewide standards for warehouse construction.

As a result of the fatalities and injury, the U.S. Department of Labor’s Occupational Safety and Health Administration has launched an investigation into the workplace safety rules at Amazon and if the company had any proper emergency actions plans. However, the OSHA investigation will not be examining the structure’s construction or whether it met buildings, or if those codes should be reevaluated.

This investigation is expected to conclude by April.

Since the incident, Amazon has already received a wrongful-death lawsuit, alleging that the company “knew or should have known that this location would not protect them.”

To that point, Rep. Jay Hoffman (D-Swansea)—who co-represents the district that was most affected by the tornado—was also quoted in saying, “It would seem to me there should have been more safe zones for the workers that were actually safe zones.”

An Amazon spokeswoman reports that the warehouse was built to code and has welcomed reviews of their safety standards. In a press release issued by Senior Vice President at Amazon John Felton later that month, he reported that the facility did have a storm shelter and that most of the workers inside had been evacuated there. Felton added that the shelter was “mostly undamaged.”

The meeting was called to improve workplace safety during natural disasters. According to the National Institute of Standards and Technology more tornado deaths happen indoors and attributes this to improper precautions, such as storm shelters or evacuation plans.

In 2014, the state updated its school building code to include a storm shelter for all newly built schools. Despite this standard not yet being applied to other facilities, the state has been reported to adopt the ICC 500, which applies to the design, construction, installation and inspections of both residential and community storm shelters.

Regardless, labor experts say that even with safer building codes and practices in place, there is still a need for proper training and how people should act in the event of a natural disaster. Jim Bell, Director of Operations with the National Storm Shelter Association, adds that another problem with requiring safe rooms or proper protocol is the lack of enforcement for these safety regulations.

“We can’t stop tornadoes,” added Rep. Katie Stuart (D-Edwardsville), “but hopefully we can do what we can to stop loss of life and protect people.”

While state legislators have yet to file legislation in response to the tragedy, the Illinois House Labor and Commerce Committee is calling for stricter enforcement by inspectors and building owners alike when maintaining tornado shelters.

Around the same time as the tornado took place in Edwardsville, Illinois, the American Society of Civil Engineers announced the release of its newly updated ASCE/SEI 7-22 with the goal of better protecting infrastructure from tornado damage.

Research posted by U.S. Tornadoes suggests that approximately 80% of tornadoes in the nation rate between EF0 to EF1 strength, while the tornado that struck Kentucky was reported to rank anywhere between an EF3 and an EF5.

Prior to the new standard, in 2019, a civil engineering professor from Ontario’s Western University, who has studied the effects of high winds on buildings since 1997, said that research could lead to the development of a standard that considers wind loads from the roof to the foundation.

At the time, Greg Kopp, who conducts research using full-scale lab testing and model-scale wind tunnel studies, as well as onsite investigations after severe storms, told Daily Commercial News that he was aiming to identify methods of improving the resilience in homes and low-rise buildings.

Research so far has pointed to increased use of hurricane straps, better nailing patterns on roofs and improved nail quality. However, the engineers are also looking at hip roofs over gable roofs, trusses over stick building and slanted roofs over flat roofs, according to DCN.

Other projects the team was working on included focuses on the performance of vinyl siding, for residential walls, and metal roofs and for commercial buildings. The collaborative research involved State Farm, the Institute for Catastrophic Loss Reduction, the Insurance Institute for Business and Home Safety and the Metal Building Manufacturers Association.