At the beginning of the month, the American Society of Civil Engineers announced the release of its newly updated ASCE/SEI 7-22 with the goal of better protecting infrastructure from tornado damage.

“ASCE 7 is essential to the profession,” said J.G. (Greg) Soules, Ph.D., P.E., S.E., P.Eng, F.SEI, F.ASCE, Senior Principal Structural Engineer for CB&I and Vice Chair of the ASCE 7-22 Committee. “And it all has to do with the safety of the public. That’s our driving focus.”

The new standard arrives just weeks after twisters riddled the Midwest, leaving thousands without homes and 77 dead. Research posted by U.S. Tornadoes suggests that approximately 80% of tornadoes in the nation rate between EF0 to EF1 strength, while the tornado that struck Kentucky was reported to rank anywhere between an EF3 and an EF5.

“Tornadoes previously were beyond the probabilities we normally design for,” said Soules, who has been working on the ASCE 7 Committee for 25 years. “But more study was done, and we found that tornadoes were undercounted to the point where they should now be considered.

“We’re not designing tornado shelters with ASCE 7; we’re simply designing for somewhat higher wind loads in certain regions of the country. But it is important to do.” 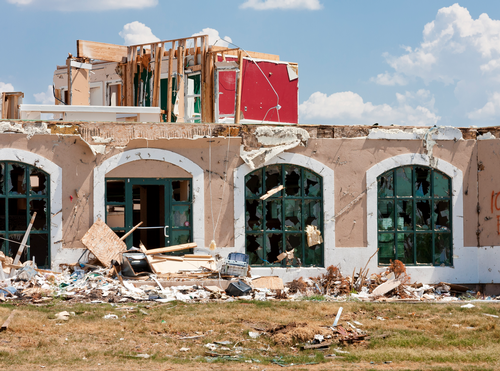 SteveDF / Getty Images
At the beginning of the month, the American Society of Civil Engineers announced the release of its newly updated ASCE/SEI 7-22 with the goal of better protecting infrastructure from tornado damage.

“These are first in the world standards for tornado design, and the research will continue and be able to expand them and clarify them in the future,” Scott said.

In 2022, the standard is slated to go up for consideration to be entered into Chapter 16 of the 2024 International Building Code.

Earlier this year, in June, ASCE released a new manual of practice, reporting that the document will give civil engineers the tools to design, plan and build more resiliently, more consistently.

The new manual is sponsored by the ASCE Infrastructure Resilience Division and was edited by Bilal M. Ayyub, Ph.D., P.E., Dist.M.ASCE. Ayyub is also noted to serve as the director of the Center for Technology and Systems Management of the Department of Civil and Environmental Engineering at the University of Maryland.

More recently, this month, the Seattle City Councilmembers announced that they were planning to address over 1,100 unreinforced masonry buildings in the city in need of seismic retrofitting, most of which were built before 1945.

At the beginning of December, one of North America’s most active fault lines experienced a slew of more than 40 earthquakes, ranging between magnitudes of 3.5 to 5.8. While the seismic activity was reported to only affect an over 200-mile-long Oregon coast in Newport, the event heightened the level of concern of millions in the region regarding safety and future instances.

Just a few weeks before the onslaught of seismic activity, The Seattle Times noted on Oregon’s efforts to outfit its schools for seismic safety while simultaneously calling out Washington for its vulnerability to potential earthquakes and tsunamis.

In October, state lawmakers in Oregon passed new legislation outlining fire-safe building codes, in addition to the development and maintenance of a comprehensive statewide map of wildfire risk.

While the bill aims to better protect property owners from future destruction, it does not come without backlash. This is mostly in part to the legislation having to define a “wildland-urban interface,” where residential areas meet forests and rangelands. Due to these new restrictions, critics from real estate, construction and agricultural industries voiced concerns over whether the bill would increase costs for property owners, homebuilders and farmers and infringe on private property rights.

To mitigate the concerns, opponents of the new building codes have been placed on advisory committees as to better define these new interfaces. Some of members of the committee include Mark Long, CEO of the Oregon Home Builders Association, and Dave Hunnicutt, President of the Oregon Property Owners Association.

While those areas are being outlined, another program—backed with $11 million in funding from the legislation—has already been launched to clear flammable brush from “home ignition zones.”