The Michigan Department of Transportation recently announced that it is using carbon fiber to reinforce components in two bridges being constructed, with a goal of building bridges that last 100 years.

MDOT partnered with Lawrence Technological University in Southfield, Michigan, in 2001, researching carbon fiber reinforced polymer materials in concrete bridge beams. According to the release, this “game-changing” technology is now moving from the lab into the field.

“The aim is bridges that last a century with minimal maintenance,” said State Transportation Director Paul C. Ajegba. “This technology, developed here in Michigan, is becoming wildly popular all over the country.”

One method for strengthening the concrete of modern bridges, built to withstand the loads of thousands of vehicles every day and extreme temperature changes, is prestressing concrete with high-strength materials. Typically, steel cables are installed inside forms before the concrete is poured. 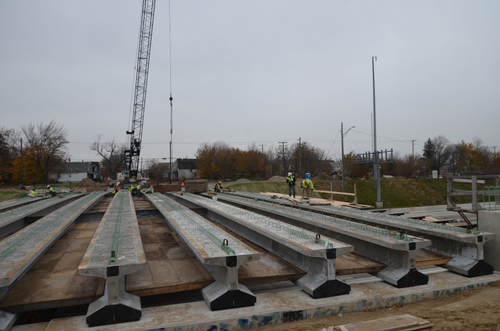 MDOT
The Michigan Department of Transportation recently announced that it is using carbon fiber to reinforce components in two bridges being constructed, with a goal of building bridges that last 100 years.

The stands are then tensioned with a significant force, causing them to extend, and those strands are released once the concrete has gained strength and compresses. Prestressing reduces or eliminates cracking from concrete shrinkage, allowing for thinner and longer spans. The built-in compression also protects the beams from stress from subsequent loads.

Conditions in Michigan, like extreme temperatures, water and deicing chemicals can cause corrosion and deterioration on steel highway bridges, requiring time, money and limiting the lifespan of a structure. According to MDOT, carbon fiber strands have a tensile strength comparable to steel, but resist corrosion, require less maintenance and create longer service life.

“Rusting of steel elements is the leading cause of deterioration in our bridges. Since carbon fiber is non-corrosive, we are eliminating that potential for damage,” said MDOT Chief Bridge Engineer Matt Chynoweth. “Using a material that will not corrode is a real game-changer.”

As part of testing over the years, the beams have been subjected to 300 freeze-thaw cycles, combined fire/loading events, severe weather and other trials. The bridge designer plan to use this information and specifications to predict how the carbon fiber reinforced beams will perform under real-world conditions and design tools for future bridge projects.

According to the release, LTU, MDOT and the City of Southfield deployed the Bridge Street Bridge, the first three-span carbon fiber prestressed concrete bridge in the country, in 2001. It was equipped with sensors to be monitored by MDOT until 2025.

MDOT reports that over a dozen bridges have been built in the state using these reinforced components, with materials being deployed “strategically” on higher-volume routes. The southbound I-75 span over the Sexton-Kilfoil Drain in Detroit has some of the longest carbon fiber concrete beams in the state at 140 feet.

Two bridges are currently being built with carbon fiber reinforced beams as part of the I-94 modernization project in Detroit, using beams with newer 0.7-inch diameter carbon fiber strands that reportedly allow for greater initial tensioning than steel. The beams were set in late November for the Burns Road bridge.

One of the factors limiting implementation of the beams is price, as carbon fiber elements can cost as much as three to four times more than comparable steel elements. However, MDOT and LTU report that as the beams are designed to last much longer than steel, they may prove to be cheaper over a longer period of time.

Tokyo Rope, one of MDOT’s main suppliers, built a fabrication facility in Michigan, cutting down on some costs and delivery times for the components.

“We've calculated the ‘break-even point’ to be about 22 years based on life cycle maintenance,” Chynoweth said. “But since the data points only go back about 20 years, this is a theoretical estimate.”

The project was named as one of the top 16 research projects by the Research Advisory Committee at the American Association of State Highway and Transportation Officials in 2020. The research has also reportedly led to new MDOT and AASHTO design specifications.

In August last year, MDOT announced the development of a new online tool to better keep the public informed on the progress of local bridge repair projects.

Viewable via online dashboard on the Department’s website, the Bridge Bundling pilot program (a first of its kind in Michigan) serves to display how close a bridge is to completion by percentage, updates, detour routes and other information. Currently, MDOT is working to repair or construct 19 bridges in the state.

“The scope of work for these bridges is superstructure replacement, which includes full removal and replacement of the bridge deck and supporting beams,” said MDOT Chief Bridge Engineer Matt Chynoweth. “Under the pilot program, three bridges will be rebuilt this year, beginning in August. The contract requirements call for them to be finished in 60 or 90 days.'”

The three bridges Chyoweth referenced, include:

The remaining 16 bridges are scheduled for improvements in 2022 and 2023 and will be closed and detoured by local agencies.

MDOT expects bridge bundling, which covers several bridge locations under one contract, to streamline coordination and permitting, increase economies of scale, and improve bridge conditions on local routes around the state. MDOT is working to expand the approach, already in use on state trunkline projects, to address locally owned bridges.

In addition, the Department predicts that by combining several contracts into one, bridge bundling will better allow one contractor, or one group of contractors, to work on multiple bridges in several locations, simultaneously, if needed.

If achieved, MDOT reports that the program could bring taxpayer savings through the standardization of bridge components and mobilization costs.