Classified as mixed inhibitors, MCIs are based on amine technology (amine alcohols and amine carboxylates) and are capable of affect both anodic and cathodic portions of a corrosion cell. MCI can be applied in many forms, including as a concrete admixture or a topical treatment.

In its release, Cortec reported on the historic preservation of the Zagreb Cathedral and the Castle of Ilok. Both landmarks are located in Croatia, with original construction dating back to the medieval times. For both restoration projects, Cortec MCI technology that protects reinforcing metal in concrete from corrosion was used. Corrosion inhibitors were applied to prolong the life of the structure.

In looking at the Zagreb Cathedral restoration project first, Cortec shared that the structure is one of the tallest in the country. Designed as a gothic-style sacral building, construction of the structure dates to 1093. Over the centuries, the monument of architecture has undergone reconstruction and renovation efforts by various architects and industry professionals. 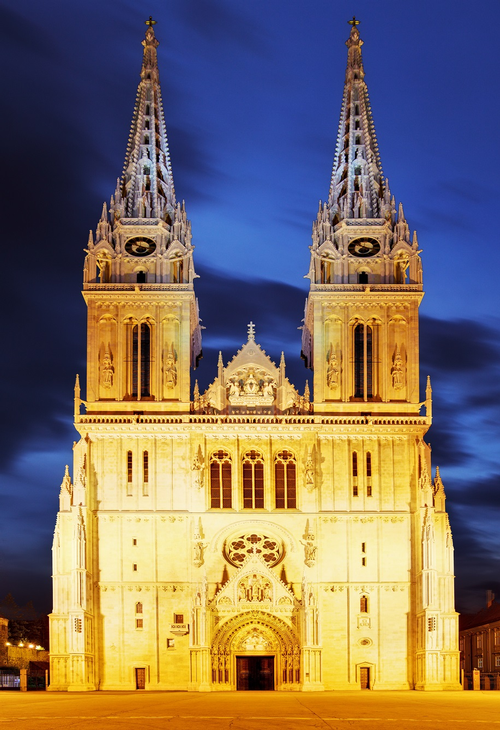 Over the last 30 years of the structure’s history, Cortec noted that the Zagreb Cathedral has received extensive restoration work with ongoing repairs underway today. During reconstruction work on the south tower in 2012, damaged steel joints were found surrounding the tower.

According to the release, most of the joints were only partially exposed in order to replace the surface layer of stone on the belltower, while the back of the joints remained embedded in stone and lime mortar. These joints were noted to be covered with a layer of rust. However, in drainage areas, the joints were reportedly corroded all the way through the cross-section.

To better maintain and improve the mechanical resistance and structural stability of the tower, the Faculty of Mechanical Engineering and Naval Architecture of Zagreb was called in to examine the joints. At the laboratory, the team performed experiments on steel joints removed from the cathedral and recommended doing the following:

To keep costs of the repairs to a minimum, those on the project also suggested that a minimal range of intrusion be used to keep the mechanical resistance and stability of the tower structure at its existing level. To ensure this, Cortec’s CorrVerter MCI Rust Primer was recommended for corrosion protection.

A water-based product, CorrVerter quickly converts rust into a protective layer and is capable of penetrating into corroded surfaces. The coatings technology contains a novel chemical chelating agent that modifies surface rust into a hydrophobic passive layer.

After brushing the area with a wire brush, two coats of the rust primer were applied directly to the metal surfaces at the cathedral. The company notes that in smaller areas, applicators used a brush to apply the coating, while spray application was used for larger areas.

After coating application was complete, the team reinforced the joints with steel fishplates that were welded onto the joints and also protected with CorrVerter MCI Rust Primer.

The second project noted in Cortec’s release was the renovation of medieval walls in the town of Ilok. Reported to be a place rich of history and cultural heritage, the town is home to a long fortress and royal Castle of Ilok.

The tower walls making up the landmark are reported to have a square floor plan, rested on foundations made of broken stone. In the centuries since its construction, the walls have been exposed to damaging atmospheric influences. As a result, the binding material between the bricks has since been washed away, leading to brick deterioration.

According to Cortec, renovation work involving foundation strengthening, repairing collapsed areas and the injection of cracks was carried out at tower three. This called for the use of corrosion inhibitors to prolong the life of the structure.

Specifically, Cortec’s MCI-2005 was added into the concrete being used to reinforce the foundation. Described as being an amine-carboxylate based corrosion inhibitor additive, the coatings technology was selected to protect embedded metallic reinforcement from corrosion in order to extend the lifetime of the walls.

Like the rust primer previously mentioned, MCI-2005 is a water-based, organic corrosion inhibiting admixture with set-retarding effects. When incorporated into concrete, the technology migrates towards reinforcement to form a molecular layer that inhibits the corrosion reaction on both anodic and cathodic components of the corrosion cell.

When used in new construction, the protection is quantified by subsequent reduction in corrosion rates when corrosion does initiate. When used with repair mortars and grouts, MCI-2005 can reportedly protect rebar within a patch and can also help protect embedded reinforcement already in place in undisturbed concrete adjacent to the repair. Cortec notes that MCI-2005 is a USDA Certified Biobased Product.