A recent report from national transportation research nonprofit TRIP showed that, despite state and federal funding increases, Montana’s transportation system is still in need of road and bridge improvements, as well as safety and capacity upgrades.

The “Keep Moving Montana Forward” report examined the mobility, efficiency, condition and safety of the state’s surface transportation system, the impact of recent funding and challenges it might face to accommodate future transportation growth and sustain adequate state funding.

“Working together we will continue to find efficiencies and build strong partnerships with local governments, communities, and our contracting partners.”

Starting off with road conditions, the report from TRIP found that nearly one-third of Montana’s major locally and state-maintained roads are deteriorated, with 13% in poor condition and 17% in mediocre condition. 16% of major roads are in fair condition, while the remaining 54% are described in good condition. 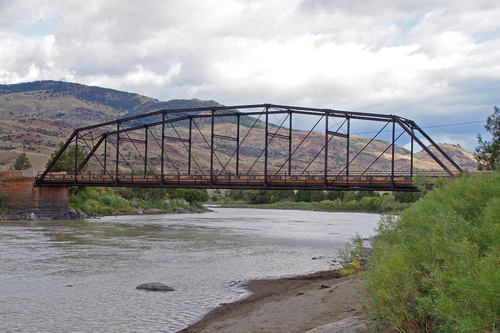 Robstutz, CC-BY-3.0, via Wikimedia Commons
A recent report from national transportation research nonprofit TRIP showed that, despite state and federal funding increases, Montana’s transportation system is still in need of road and bridge improvements, as well as safety and capacity upgrades.

Looking at bridges next, 7% of Montana’s bridges statewide are rated poor or structurally deficient, with “significant” deterioration to the bridge deck, supports or other major components. 62% are rated in fair condition, with the remaining 31% classified as good condition.

“Montana depends on a safe and efficient transportation system to deliver goods and services to surrounding markets, and to keep our families safe in our daily travel routines,” said Darryl James, Executive Director of the Montana Infrastructure Coalition.

“In 2017, the Montana Legislature took the bold step of increasing the state fuel tax for the first time in a quarter century.  That modest increase has provided significant opportunity for cities and counties to address long-overdue transportation safety and efficiency issues, and provided the state with additional revenue to leverage matching federal dollars at a very favorable 13 to 87 rate.

“The increasing cost of labor and materials combined with much greater fuel efficiency and broadening usage of electric vehicles should be prompting us to adjust our transportation-related fees and taxes to adapt to these evolving trends.”

Across the country, total state spending rose 7.3% overall in fiscal year 2022 and infrastructure construction spending increased 15.3%, thanks to funding from the bipartisan infrastructure law. This percentage is reportedly the highest annual figure since 1994 and is only expected to grow over the next several years thanks to federal funding.

However, while it is noted that increased state and federal transportation funding has allowed Montana to accelerate projects to improve traffic safety, relieve congestion and improve the condition of roads, highways and bridge, the state still faces challenges in accommodating growing traffic and providing safety improvements.

“Montana has put the increased state and federal transportation dollars to good use and made needed improvements to its transportation network,” said Dave Kearby, TRIP’s Executive Director. “But, in order to continue to enhance the system, the state will need to make further increases in its level of transportation investment.

“A safe and reliable transportation network that is maintained in good condition and offers improved mobility and accessibility to meet the needs of Montana residents, businesses, and tourists alike, is critical to moving Montana forward.”

In its most recent Infrastructure Report Card from the American Society of Civil Engineers, Montana received an overall “C” grade. ASCE noted at the time that investments needed to improve infrastructure included investment in transportation, energy and clean water distribution systems, and wastewater collection.

Montana oversees 4,471 public bridges with an average age of 44 years, including 2,484 state-owned structures and 1,987 locally-owned structures, based on 2018 MDT data. Total bridge deck area was 11,179,380 square feet, 7.3% of which was rated as poor/structurally deficient, giving this category a “C” grade.

Roads classified on the Report Card with a “C-” grade, with 46% of the major roads in poor to mediocre condition at the time. Montana also ranked the eight highest fatality rate in the nation, which ASCE noted was “concerning.”

In November, the Biden-Harris Administration released a fact sheet regarding how the bipartisan infrastructure law was delivering to Montana. At the point of release, $2.7 billion in funding from the bill had been announced for more than 150 specific projects in the state.

One spotlighted project in the state includes the reconstruction of 3.1 miles of existing gravel road on the Northern Cheyenne Rosebud Cut-Across US 212 to MT 39. Awarded as part of the 2022 RAISE grants, the project is expected to improve safe transportation infrastructure for travelers, as well as improve the overall air quality for communities and address negative environmental impacts of transportation.