“These are enduring assets that will help us understand the durability of new coatings and surface treatments to transition these technologies to protect real assets in the field,” said Dr. Emily Asenath-Smith, research materials engineer and lead of the Ice Adhesion Facility at ERDC’s CRREL.

“We’ll be tracking the weather, and we’ll have camera monitoring at each site, so researchers will have visual and meteorological data to pair with data on coating performance at each location.”

According to the release from the U.S. Army Corps of Engineers, Asenath-Smith has collaborated over several years with ERDC’s Paint Technology Center of Expertise to establish the new facilities. Located in Champaign, Illinois, the Center at the Construction and Engineering Research Laboratory is led by Dr. Rebekah Wilson. 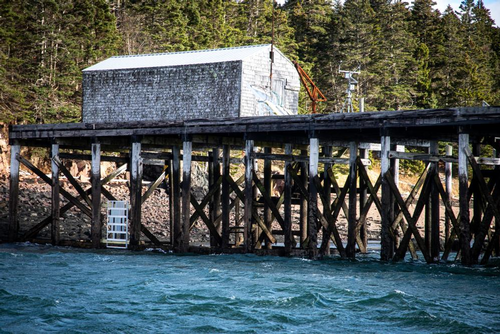 “CERL has had the capability to expose coatings to outdoor conditions in their environment for a long time,” Asenath-Smith said. “Across the Army and the federal government, the coldest place they’ve tested coating technologies is in Champaign, so our new facilities are a big expansion of capabilities.”

“This capability, to test coatings in these cold, tremendously inhospitable climates, is completely new for a federal laboratory,” Wilson said. “This seems like it’s going to open up a lot of possibilities to develop new cold weather coating technologies.”

Planning for the facilities at three locations started in 2019. The first prototype rack was reportedly deployed on Treat Island located in the Bay of Fundy off the coast of Eastport, Maine, in 2021.

Asenath-Smith described this site as “unique” because it is the U.S.’s northern-most point off the Atlantic coast. Completely exposed to wave action and wind, the tide can change by 22 feet at each cycle with two cycles per day.

Additionally, the cold water gets icy in the winter, providing the opportunity for the coated test panels to be exposed to cyclic immersion in salt water, freezing and thawing conditions and solar irradiance. Asenath-Smith reports that common estimates indicate that one year on Treat Island is equivalent to six years inland.

“The first rack was deployed on Treat Island to see if it would still be standing and still have samples in it,” she said. “After that first winter, not only was the rack still here, it had all the coated panels in it — they were just a little bent.”

The Army Corps reports that the second improved version, complete with weather and visual monitoring system, was installed in November last year.

“We had to build a monitoring system that will stand by itself with no human interaction for up to eight months,” said Olivier Montmayeur, a CRREL research mechanical engineer who retrofitted part of the facilities on Treat Island in November.

“It’s always different between engineering from photos and actually getting your hands dirty and seeing what’s going on in person. We got there and had less than 30 minutes from the time we could get onto the lower dock to install the new rack, before it was completely submerged again.”

The facilities at Hanover were reportedly deployed in October, while the system was erected in Fairbanks in August. The Army Corps reports that Asenath-Smith and her team already have projects slated for the next few years to take advantage of the new capabilities.

“Our main customer right now for Treat Island is the Office of Naval Research; we are assisting them with the assessment of coatings to control topside ship icing and icing on ship superstructures,” Asenath-Smith said.

Some of the testing occurring before deploying the panels and after are related to how well the coating adheres to the metal of the panels, or how well the ice adheres to a surface after exposure. The team also reportedly has specimens from the National Institute of Standards and Technology at their Hanover site.

In Alaska, the team is using samples to support a study for the Army related to the surfaces of modular, temporary bridging systems that the Army uses. The Improved Ribbon Bridge (IRB) is of particular interest, Asenath-Smith noted.

These new capabilities could have civilian application, too, the Army Corps reports.

“Once the military validates technology like this, it usually translates to civilian infrastructure,” said CRREL Director Dr. Joseph Corriveau. “Imagine, if we can actually mitigate icing and corrosion on structures that are going to be exposed to cold climates, we can use that technology on municipal infrastructure, vessels like crabbing ships, and so on.”

In August, it was reported that the ERDC was testing high military load capacity vehicle weight limits of the IRB. The research was in partnership with the U.S. Army Program Executive Office Combat Support & Combat Service Support’s Project Manager Bridging, and also includes personnel from the Mississippi Army National Guard and Anniston Army Depot.

The IRB floating bridge system is used to transport weapon systems, troops and supplies over water when permanent bridges are not available. Used since 2003, the U.S. Army reports that it provides wet-gap crossing capabilities either as a floating bridge or as a multi-bay raft for tracked and wheeled combat and tactical vehicles.

Divided into three testing phases, the project is expected to take two years to complete. The first phase of the project was completed in September 2021, which involved full-scale water testing of several military vehicles at various speeds and weights.

The next tests will incorporate hydrodynamic aspects, such as flow and depth, to complement each other.

Once small-scale testing is complete, the final phase of the project will begin by putting all data into a computational model to look at all loads and conditions the team was unable to test. This will allow the team to know what operational conditions they can safely cross the IRB.