According to the release, APC will supply its MarineLINE tank coating system to Guangzhou Shipyard International, the biggest shipbuilder in South China, in early 2023.

The agreement will see APC’s team work on two 49,990 dual-fuel DWT tankers, which are part of a fleet of six methanol-powered dual-fuel tankers GSI is building. In total, MarineLINE will be applied to 17 cargo tanks on each vessel, covering more than 50,000 square meters.

APC reports that the state-of-the art ships are the first of their kind ever constructed in the country. Each tanker will use 12,500 tons of methanol a year, virtually eliminating sulfure oxides (SOx) and particulate matter (PM) and cutting nitrogen oxide (NOx) emissions by 60%.

Additionally, they will reportedly reduce carbon dioxide emissions by up to 15% on a tank-to-wake basis versus conventional marine fuels.

“We’re immensely proud to secure this deal with Proman Stena Bulk,” said APC Marine Manager Captain, Onur Yildirim. “We recognize the project is about building some of the most advanced tankers ever constructed. MarineLINE can play its role in innovation. For example, MarineLINE can have positive environmental benefits as it is easier and quicker to clean than epoxy coatings.” 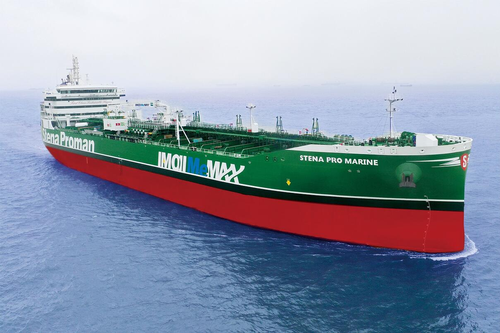 “This means less of the ship’s engine fuel is used to heat hot water, which can help cut emissions. In addition, faster cleaning times are better for the environment as they cut the chemical cleaning agent required and slops generated by up to half compared to epoxy coatings.

“Moreover, faster cleaning times enable quicker ship turnaround, which, in turn, can free up additional sailing days, improving the performance ability of the vessel. APC’s team here in Ohio and in China also knows the GSI shipyard well, which will help us provide efficient heat curing and application services at the yard.”

According to Yildirim, MarineLINE’s robust performance qualities helped it win the deal.

"Critically, it enables operators to carry a wide variety of different cargoes frequently without risk of cross-contamination," he said.

“We [are] very much look forward to working with Proman Stena Bulk on the full life cycle of the coating from application to maintenance.”

In May, APC announced that it had won a new deal to supply two new chemical tankers being built in Turkey.

According to the company’s press release, work on the project started at the end of May. The new build vessels’ cargo tanks and slop tanks will both receive applications of APC’s MarineLINE coating system. In addition, the vessels will also undergo an application inspection and full heat curing services.

In July, the company signed a signed a multi-ship deal to recoat 10 tankers with Turkish ship management firm Chemfleet. APC reports that the move reinforces its position as a major protective tank coating company in Turkey’s maritime sector.

Yildirim added that the new contract follows a third special survey of the chemical tanker fleet, which takes place after APC’s MarineLINE tank coating system has been in place for 15 years. The tank coating, at this point, needs to be recoated to maintain its performance.

The Chemfleet deal marks a “strong period” for APC in Turkey, with a collection of other projects also struck in June to recoat eight additional vessels for a range of Turkish ship owners. APC reports that in total, the deals will see 18 vessels recoated with MarineLINE.

The following month, APC signed yet another series of new chemical tanker deals in Turkey, commanding 80% of the area’s market. The jobs included undertaking two repair jobs at a yard for Turkish shipowner Veysel Vardal Shipping.

The company stated at the time that it now has more than 12% of the global chemical tanker coating market. 700 ships have reportedly been coated worldwide with its MarineLINE product.

Most recently, last month, APC landed its third deal of the year with Bernhard Schulte Shipmanagement (BSM) to recoat 15 cargo tanks. The recoat work will be completed on its 25,583 DWT chemical tanker, the Reinhold Schulte.

According to the release, the agreement follows similar deals from earlier this year to recoat the 25,581 DWT Rudolf Schulte and 25,620 DWT Rebecca Schulte, signed by Captain Yildirim alongside BSM’s Ship Management Center in Singapore.

Work was anticipated to begin last month at the IMC Shipyard in Zhoushan, China, with a completion date in November. The company’s MarineLINE protective tank coating will reportedly be applied on more than 19,000 square meters (roughly 204,514 square feet) of cargo tank space aboard the tanker.

Captain Yildirim said APC is “delighted” to win the latest deal after it was initially specified as the tank coating when the three tankers were built in China in 2011 and 2012. The recoating is required to maintain the high performance of MarineLINE following 10 years of service.

“We are looking forward to starting this extensive recoating job as well as building on the strong relationship we have built with BSM from recoating the two ships earlier this year,” he said. “The work will be managed by APC’s Chinese team led by Daniel Liu, our inspection manager. We will supply full application and heat curing services.”

APC also reported at the time that its maritime sales increased by 40% in 2021, with 56 ships coated with over 750,000 square meters of MarineLINE coatings. It also now reportedly accounts for more than 11% of the global cargo tank coating market, with more than 700 vessels coated worldwide.