The work is anticipated to be used for the NASA Europa Clipper spacecraft electromagnetic compatibility test campaign. Launching in 2024, the Europa Clipper will perform dozens of close flybys of Jupiter’s moon Europa to gather measurements for an investigation into whether the moon could have conditions suitable for life.

About the Mission, Contract

According to NASA, Europa shows strong evidence for an ocean of liquid water beneath its icy crust, making it one of the most promising places to potentially find habitable environments in our solar system.

The Europa Clipper spacecraft is anticipated to launch in October 2024, following a Mars-Earth Gravity Assist (MEGA) trajectory. Then, it will travel for five and a half years, arriving at Jupiter in April 2030.

Once in orbit around the planet, the Clipper will make nearly 50 flybys of Europa at closest-approach altitudes as low as 16 miles (25 kilometers) above the surface, examining different location during each flyby to scan nearly the entire moon. 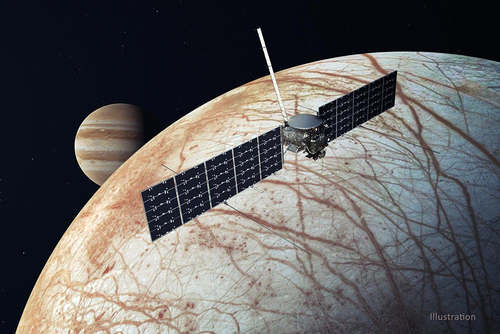 The Europa Clipper design is reportedly the largest spacecraft NASA has ever developed for a planetary mission. Because it will also be surrounded by radiation trapped in Jupiter’s magnetic field, the spacecraft will be enclosed in a thick-walled vault made of titanium an aluminum to act as a radiation shield, slowing down the degradation of its electronics.

The spacecraft's payload will include cameras and spectrometers to produce high-resolution images and composition maps of Europa's surface and thin atmosphere, an ice-penetrating radar to search for subsurface water and a magnetometer and gravity measurements to unlock clues about its ocean and deep interior.

Additionally, it will carry a thermal instrument to pinpoint locations of warmer ice or recent eruptions of water, as well as instruments to measure the composition of tiny particles in the moon's thin atmosphere and surrounding space environment.

To aid in this, earlier this month, AMD announced it had signed the contract with NASA’s JPL for its proprietary thin-film coatings technology for the mission.

Specializing in “cutting-edge” materials science, the thin-film coatings technology is a radio frequency-absorbing nanomaterial that can be applied to a variety of substrates. According to AMD, the materials could help enable the Europa Clipper project to confirm that the spacecraft’s sensitive ice-penetrating radar will operate properly at key frequencies so as to meet science objectives.

“This contract is a huge milestone in AMD’s evolution but more so, it is a huge honor to be involved in the challenges of space exploration.”

Other Coatings for NASA

Prior to takeoff, NASA reported that teams had applied its historic logo—also referred to as the “worm”—on visible parts of the Artemis I rocket and spacecraft. Originally introduced in 1975, the worm logo was retired in 1992, but brought back for the latest slew of planned Artemis missions.

According to the Administration, coatings work for the worm logos was launched at the end of August 2020, when workers with NASA’s Exploration Ground Systems and their contractor Jacobs started painting the iconic design across two of the SLS booster segments.

The crew reportedly used a laser projector to mask off the logo with tape. This was followed by the application of the logo inside the center’s Rotation, Processing and Surge Facility. In total, the logo received two coats of paint and several clear coating applications.

In an emailed press release, Acrymax Technologies, Inc. (Media, Pennsylvania) shared that it was responsible for engineering a coating system for the bright red NASA worm logo. In addition to the SLS boosters, the worm and European Space Agency (ESA) logos were also applied to the Orion spacecraft.

In addition to coatings that were used for the worm logos, Acrymax coating systems were also used to protect the insulation on the solid rocket boosters (SRBs).

In the days following the launch of Artemis I, Imagineering Finishing Technologies (South Bend, Indiana) shared that it had also been involved with critical components of the spacecraft’s SLS. According to reports, the company provides non-destructive testing, paint and Chemical Conversion Coatings on rocket components.

In September, NASA announced that it selected three companies to work on deployable solar array systems for exploration on the Moon. A total of $19.4 million has been awarded to build prototypes and perform environmental testing.

These systems are expected to help power both human and robotic lunar exploration through Artemis missions, with a goal of establishing long-term presence near the lunar South Pole. To provide a reliable and sustainable power source, NASA reports that it is supporting the development of vertical solar arrays that can autonomously deploy up to 32 feet high and retract for relocation if necessary.

The designs must reportedly remain stable on sloped terrain and be resistant to abrasive lunar dust, all while minimizing both mass and stowed volume to aid in the system’s delivery to the lunar surface. The goal is to deploy one of the systems near the Moon’s South Pole near the end of this decade.

In August, a coating developed by a Florida International University lab to protect equipment on the lunar surface from radiation was scheduled to be studied on the International Space Station. For the research, which was expected to take place this fall, a sample of the coating will be mounted outside the facility for exposure to space, then analyzed for its resistance to radiation.

FIU’s Plasma Forming Laboratory from the College of Engineering and Computing reportedly developed an innovative coating material to shield structures, such as rovers or excavation tools, against radiation levels up to 1,000 times greater than on Earth.

The research arrived as NASA’s Artemis Program plans to build the first-ever base camp on the lunar surface. Radiation on the moon can interrupt signal processing in electronics and shorten the service life of structures.

The coating sample will be placed directly facing the sun on the ISS. FIU and NASA scientists will both watch closely for how the coating changes temperature as the space station orbits Earth. After six months, a crew of astronauts will take the material back to Earth for analysis.

And in January, polymer coatings research conducted by the University of Idaho was launched and installed at the International Space Station, with hopes to minimize bacterial transmission. The university was one of five selected through NASA’s Student Payload Opportunity with Citizen Science (SPOCS) nationwide competition.

The coatings were tested on an aluminum alloy used in high-contact areas throughout the ISS, such as handrails and door handles, to test how microgravity affects the efficacy of the polymers known to resist bacteria adhesion on Earth.