The French Senate has recently approved new legislation requiring that the roofs of existing and new car parks with at least 80 spaces be covered by solar panels.

Noted to be part of President Emmanuel Macron’s renewable energy plan, the bill mandates the solar canopies to be in place within the next five years.

Arriving at a time when the European nations are reviewing their domestic energy suppliers after the fallout from Russia’s invasion of Ukraine, the latest solar panel provision aims to stimulate the development of solar energy production in France—particularly in large commercial areas.

The country itself has recently experienced technical problems and maintenance issues regarding its nuclear fleet powerhouse. With the passing of the latest legislation, the French government believes that the potential of installed photovoltaic shades at outdoor car parks could reach up to 11 gigawatts, or the equivalent of 10 nuclear reactors.

According to reports, when the bill was first introduced it required that car parks measuring more than 2,500 square meters (nearly 26,910 square feet) would have to cover at least half of the park with solar panel canopies. This detail was later refined to the number of spaces. 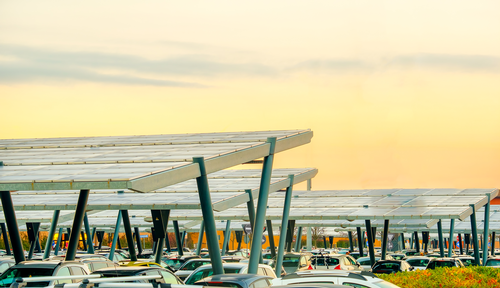 LucaLorenzelli / Getty Images
The French Senate has recently approved new legislation requiring that the roofs of existing and new car parks with at least 80 spaces be covered by solar panels.

Per the final document approval, which took place on Nov. 4, car parks with more than 400 spaces must be brought into compliance within three years. For car parks with 80-400 spaces, owners will have five years to comply. At least half of the car park surface must be covered by solar panel canopies or another renewable energy source.

Several amendments were also made regarding the new legislation and have since been supported by the French government. Of them, Nathalie Delattre (RDSE) and the centrist Stéphane Demilly had parking lots for heavy goods vehicles (over 7.5 tons) explicitly excluded. The legislation is also invalid for parking areas near remarkable sites—whether they are classified as protected areas or not—to avoid “distorting” them.

The possibility of granting additional time to parking managers in the event of being unable to acquire solar panels, however, has been denied.

For managers who are not compliant with the next legislation by the allotted timeframe will be forced to pay monthly sanctions based on the number of equipped places, in this case, 50 euros ($51.38) per place. As an example, a car park with 80 spaces that fail to comply with the new legislation would be exposed to 48,000 euros in penalties each year.

Provisions outlined in the legislation will come into force on July 1, 2023.

Green Roofs in the US

Over the years, the United States has witnessed a slew of legislation being passed across the nation regarding the implementation of green roofs.

In April 2019, the New York City council approved a package of bills and resolutions intended for radical energy-efficient improvements. The Climate Mobilization Act requires that all new residential and commercial buildings in the city have green roofs made up of either plants, solar panels or small wind turbines—or a combination of all three.

The bill package includes legislation written by councilmembers Rafael Espinal, Donovan Richards and Stephen Levin. All bills require that 100% of a roof’s area is to be covered by one of the green roof options, rather than the traditional 25% to 50% as required by other trending cities.

At the end of the year, St. Louis became the latest city to pass green roof legislation—in this case, roofs on new construction must be “solar ready.”

Board Bill 146, which was signed into legislation in December by former mayor Lyda Krewson and was unanimously approved by the city’s Board of Aldermen, applies to commercial, residential and multifamily construction. Lawmakers cited energy savings for the push.

The requirement is also in compliance with the 2018 International Energy Conservation Code and goes toward the Michael Bloomberg initiative (which the city is a member of) to fight climate change.

In March, Charlotte, North Carolina, joined the solar business through a green tariff deal that involved the construction of a 35-megawatt solar farm, slated to produce enough energy to power 10,000 homes per year.

At the time, the endeavor made Charlotte the most populous city in the nation to acquire such large-scale solar through green tariffs and expects the deal will also help to meet the city’s climate goals.

The following year, a bill proposed in Massachusetts aimed to make the state the latest in to require solar roofs on new residential and commercial buildings. The Solar Neighborhoods Act was reportedly filed at the beginning of March 2021, with a companion bill filed in the Senate.

In August, California Energy Commission announced that it has adopted the 2022 Building Energy Efficiency Standards for newly constructed and renovated buildings.

The 2022 update will be submitted to the California Building Standards Commission, which is scheduled to consider it in December. If approved by the CBSC, it would go into effect on Jan. 1, 2023, giving builders, contractors and other interested parties a year to gear up for the changes.

In terms of said changes, the 2022 Energy Code focuses on four key areas in newly constructed homes and businesses:

Around the same time, the U.S. Energy Information Administration issued an independent statistics and analysis report, revealing that large-scale U.S. solar capacity growth was expected to exceed wind growth for the first time in its history.

The Short-Term Energy Outlook document, which was released on July 7, 2021, projects that solar photovoltaic generating energy will surpass wind-generated energy sometime next year. According to the EIA, the solar capacity growth in the forecast reflects various state and federal policies that support renewable energy.

Following the announcement, the U.S. Senate passed the Infrastructure Investment and Jobs Act—a $1.2 trillion bipartisan bill—after weeks of negotiations. Noted in the legislation’s outline, the infrastructure package is expected to allot $73 billion for electric grid and power infrastructure.

Most recently, in June, President Joe Biden issued three executive orders to prioritize domestic clean energy manufacturing to aid in the goal of eliminating carbon from the country’s power supply by 2035.

According to the White House, the United States is now on track to triple its domestic solar manufacturing capacity by 2024, with the current base capacity of 7.5 gigawatts growing by an additional 15 gigawatts. A total of 22.5 gigawatts will reportedly enable more than 3.3 million homes to switch to clean solar energy each year.

The three actions Biden is taking include:

“Today’s clean energy technologies are a critical part of the arsenal we must harness to lower energy costs for families, reduce risks to our power grid, and tackle the urgent crisis of a changing climate,” stated the release. “Together, these actions will spur domestic manufacturing, construction projects, and good-paying jobs – all while cutting energy costs for families, strengthening our grid, and tackling climate change and environmental injustice.”