A recent survey conducted by the Associated General Contractors of America and Autodesk has found that severe workforce shortages are affecting small and large contractors.

Autodesk and AGC conducted the 2022 Workforce Survey in late July and early August. Nearly 1,300 firms from a broad cross-section of the construction industry, including union and open-shop firms of all sizes, were reported to have completed the survey.

It is the Association’s 10th annual workforce-related survey.

According to Autodesk and AGC, all types of firms are experiencing workforce labor shortages. In an analysis of the data collected from the survey, officials found that nearly identical results were reported by contractors that use craft labor to firms that operate as open-shop employers.

Similar responses were also tallied by firms making $50 million or less in annual revenue and others making more than $500 million in revenue. All regions of the United States and contractors working in different construction sectors—such as building, highway and transportation, federal and heavy work, or even utility infrastructure—all submitted results indicating similar struggles across the board regarding workforce shortages.

In a press release on the survey results, Simonson noted that 93% of construction firms report they have open positions they are trying to fill. Among those firms, 91% are having trouble filling at least some of those positions—particularly among the craft workforce performing onsite in most cases. 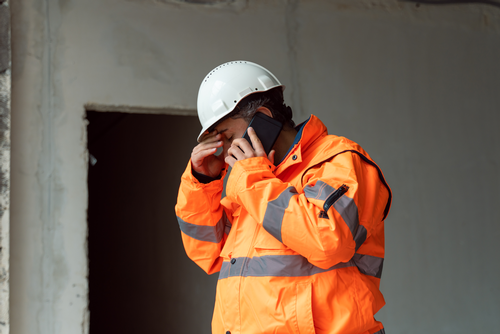 RainStar / Getty Images
A recent survey conducted by the Associated General Contractors of America and Autodesk has found that severe workforce shortages are affecting small and large contractors.

Another issue impacting the workforce availability, Simonson noted, is that most job candidates are unqualified. In the survey, 77% of respondents reported that available candidates either lacked the skills needed to work in construction or were unable to pass a drug test as the most common explanation for the difficulty in hiring.

As a result, labor shortages combined with ongoing supply chain issues are making it more expensive and time-consuming to build projects. These increased costs and delayed schedules are undermining demand for construction, as a significant percentage (58%) of owners seek to delay, downscale and even cancel projects facing rising costs and slower schedules.

Other actions contractors are taking because of the current economy is raising base pay rates for their workers (86%) and passing along rising materials costs to project owners during the past year (70%). Another 45% are choosing to provide incentives and bonuses and roughly a quarter of firms (24%) have also improved their benefits packages. 51% of survey respondents—up from 37% in the 2021 survey—report they have engaged with career-building programs such as high school, collegiate or technical school construction programs.

Construction firms have also recently boosted investments in training programs, with 47% reporting an increase in spending on education and development programs. A quarter of respondents (25%) have enhanced their online and video training capabilities and 16% are choosing to implement augmented and virtual reality technology.

“While the majority of construction firms today are struggling to find skilled workers to fill open jobs, the labor shortage is only going to intensify as more workers retire,” said Allison Scott, Director, Customer Experience and Industry Advocacy at Autodesk.

“What’s inspiring is that construction firms recognize this and are taking a proactive approach to preparing future workers for careers in construction. The renewed investments in career development and training programs, as well as a focus on digital skills demonstrates that the industry is committed to taking action to build the next generation of the workforce.”

Despite the current obstacles in filling positions, it is with great hope that the proactive actions to prepare the next generation of construction workers will help fill the gap as many in the industry (71%) are still expecting to expand within the 12 months.

AGC points out that without enough prepared workers to keep pace with demands, the federal government’s new infrastructure funding and investments will not be able to deliver. The Association has again called on federal, state and local leaders to invest in career and technical education programs that expose more existing and future workers to the many career opportunities that exist in construction.

“There is plenty of work for the industry to perform, there just aren’t enough people to do the work or materials to complete the projects.” said Simonson. “Addressing labor shortages and supply chain problems will ensure that the construction industry can upgrade America’s infrastructure, modernize its manufacturing sector and help deliver a more reliable and cleaner energy grid.”

Over the summer, specialized division of staffing giant PeopleReady, PeopleReady Skilled Trades, shared an analysis of the construction industry. The report found that construction is one of the hardest hit by worker scarcity.

Looking back at when the pandemic started in March 2020 to as far as December 2021, the division reported that four million jobs were open in key skilled trades industries—more than double the number of vacancies pre-pandemic. Today, thousands of those open positions remain, with most of the openings found in the following niche industries:

In additional data analyzed by PeopleReady Skilled Trades, 40% of the 12 million people in the skilled trades workforce are over the age of 45, with nearly half of those workers over the age of 55. While it is clear that workers are aging, or will be aging out of the field in the years to come, even fewer people are entering to replace those spots.

Since then, the White House announced that over $40 billion in American Rescue Plan funds have been committed to strengthening and expanding the United States’ workforce.

According to the announcement, the investments in the workforce—along with the American Rescue Plan’s direct payroll support that has saved or restored jobs across a broad set of industries—have contributed to a record 9 million jobs added since President Joe Biden took office.

Also over the summer, U.S. Secretary of Commerce Gina Raimondo announced that $500 million in government funding was awarded to 32 industry-led workforce training partnerships across the nation.

The Good Jobs Challenge is administered by the Commerce Department’s Economic Development Administration.

More recently, last week PaintSquare Daily News reported that President Biden recognized more than 350 organizations in the nation’s 50 states for their commitments as part of the Infrastructure Talent Pipeline Challenge.

The Challenge is focused on three sectors: broadband, construction and electrification.

Through them, nearly 150 employers, unions, and community-based organizations will create or expand pre-apprenticeships, registered apprenticeships and other high-quality training programs. In addition, more than 60 organizations will increase recruitment among workers who are traditionally underrepresented in infrastructure sectors, while nearly 30 organizations have pledged to provide supportive services, such as childcare and transportation.

Advancements in equitable workforce development will also be carried out by over 50 institutions of higher education focused on infrastructure jobs. And lastly, more than $70 million in aligned philanthropic commitments will be used to advance the goals of the Talent Pipeline Challenge, which is expected to impact tens of thousands of underrepresented workers.

For more information about the recently celebrated commitments, click here.