Earlier this month, the U.S. Army Corps of Engineers announced that it has kicked off construction for Phase 3 of the New Lock at the Soo in Michigan. The contractor recently began mobilizing major equipment to the worksite in preparation for construction in the spring.

For Phase 3, which is the largest phase of the project, the contractor will build the new lock chamber and rehabilitate the downstream approach walls. The work is expected to take seven years to complete. 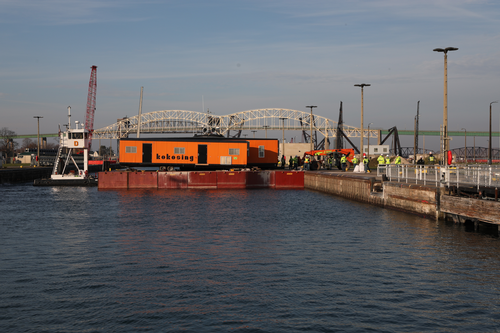 In February 2020, the Corps announced that Trade West Construction Inc., of Nevada, would begin deepening the upstream approach channel in the spring. At the beginning of May, dredging equipment started to arrive for the first phase of the project.

In June 2021, President Joe Biden’s 2022 federal budget plan proposed $480 million in federal funding for the construction of Michigan’s Soo Locks. The funding was a large chunk of the $595 million Biden proposed for projects within the Army Corps of Engineers, Detroit District.

At the same time it was noted that the Soo Locks project had acquired roughly 25% ($241.6 million) of funding for the project’s development. If approved, however, Biden’s proposal of $480 million for the project would increase the percentage of acquired funds to 78% or $721.6 million of the $922 million project total.

Although Biden’s proposal outlined $595 million for projects within the Army Corps of Engineers, Detroit District, for high water studies and monitoring, beach nourishment, harbor dredging and flood risk management, among others, the budget also included $6.793 billion in discretionary funding for the U.S. Army Corps of Engineers Civil Works Program overall.

Later that year, in November, officials announced that the project was on track to reach completion by 2030. A news conference was held at the National Museum of Great Lakes in Toledo, Ohio to update on the lock system’s progress, with port authority leaders from Toledo Monroe, the Detroit District Army Corps office and the head of the steamship company that uses the locks.

According to Lt. Col. Scott Katalenich, commander of the Army Corps of Engineers’ Detroit District, the project consists of three phases:

At the beginning of the year, it was announced that the nearly $1.5 billion project had been fully funded thanks to additional funding from the bipartisan infrastructure bill, using $479 million of the U.S. Army Corps of Engineers’ $561 million received funds for the fiscal year in Michigan and on the Great Lakes.

According to the Army Corps, the second year of upstream channel deepening for the new lock completed in mid-December 2021, excavating about 150,000 cubic yards of Jacobsville sandstone to deepen the north canal enough for the 1,000-foot ships that will use it.

At the beginning of July, the Army Corps announced it awarded the $1.068 billion contract to construct the new lock for the Soo to Kokosing Alberici Traylor, LLC, a joint venture from Westerville, Ohio. For Phase 3, which is the largest phase of the project, the contractor will build the new lock chamber and rehabilitate the downstream approach walls. The work is expected to take seven years to complete.

Additionally, the Army Corps noted that with continued funding, the remaining work may be awarded over the next three years. This is valued at $803.95 million.

In August, it was announced that the first phase of construction was substantially completed. Work was completed by Trade West Construction, Inc. using a submergible excavator attachment called a hydraulic ripper. According to the release, the contractor broke up bedrock, primarily sandstone, approximately six feet thick over a three-quarter mile long stretch from the north channel to a 30-foot depth.

In total, about 300,00 cubic yards of bedrock, overburden and other material was removed using the ripper, stone grinders and excavator buckets from barges. The material was then placed onto the Northwest Pier’s west end to act as a windbreak for passing ships, with the largest rock reportedly weighing 55 tons, or about the same weight of an adult humpback whale.

At the end of May, new estimates for the project were released, revealing the project could cost double or triple the original estimated cost. Lawmakers say that the increase is due to inflation, labor costs and supply chain issues.

At the time, the Army Corps was still working on an updated cost estimate but have briefed members of the Michigan delegation. A final figure could reportedly come in as high as $3 billion, which is more than triple the initially authorized $922 million for the project in 2018.

Michigan Senator Debbie Stabenow expressed “deep frustration” over the new costs, noting that last year she worked to “lock down” the rest of the funding needed to complete the projected from the bipartisan infrastructure law and other spending.

“In fact, by getting the money up front, the Army Corps told me that they could save money and cut about two years off the construction time,” Stabenow said.

“Now, because again, it's all related to supply-chain issues and all the other associated costs, labor issues, now it's going the other direction. Hopefully, the supply chain issues get fixed here sooner rather than later, and we'll begin to be able to see some ways to cut costs.”

At the time, measures to aid the project would potentially be covered in the Water Resources Development Act that would be voted on by lawmakers, enabling construction to continue under the existing authorization through fiscal year 2025 and providing some flexibility for the project.

“The last thing we want is to have to come back later down the road and have to reauthorize again, so that's why we're looking at the flexibility here to be able to keep the construction going,” Stabenow said.

In an update in July, the Army Corps developed reports to deliver a new cost estimate for reauthorization to Congress. According to the release, the cost increase root causes are changing market conditions, inflation, a nationwide labor shortage, design modifications and early estimate assumptions.

“We recognize funding a larger amount for the New Lock at the Soo is a challenge that could potentially result in schedule impacts,” said Deputy District Engineer Kevin McDaniels. “The Corps of Engineers is partnering with industry and federal agencies to find collaborative solutions aimed at addressing the cost impacts to Corps of Engineers programs and projects nationwide.”

On Nov. 3, joint venture Kokosing Alberici Traylor, LLC, began moving major equipment to the site via a barge in the Poe Lock. The contractor will also set up trailers in preparation for the winter season.

“KAT started their major mobilization this week with moving project trailers to the site,” Rachel Miller, New Lock at the Soo Supervisory Civil Engineer said. “They previously moved smaller pieces of equipment and have worked over the summer preparing the grounds for upcoming work.”

Phase 3 of the project involves demolishing the existing Sabin Lock, infilling the Davis Lock, constructing a new pump well, rehabilitating the downstream approach walls, and constructing the New Lock at the Soo chamber. Work will not begin until the spring due to weather conditions in Michigan.

“The Detroit District is looking forward to working with KAT on Phase 3 of the New Lock at the Soo,” said Mick Awbrey Chief of the Integrated Project Office. “We recently had a partnering and pre-construction meeting with the contractor to collectively work towards becoming a World Class team.”

“We appreciate the collaboration and communication with our Stakeholders and KAT Partners,” said Lt. Col. Brett Boyle, District Commander. “The team is fully committed to safely delivering a quality New Lock.”

The Soo Locks will reportedly remain operational during construction of the New Lock at the Soo and without interruptions to shipping traffic.