Through the expansion, which is slated to reach completion by early 2025, Covestro plans to strengthen its European production network for the foam component MDI. The material is primarily used to produce insulation materials for buildings and refrigeration equipment.

According to Covestro, the MDI market is expected to grow by around 6% per year in the medium term as a result of global trends toward sustainability and climate neutrality. The company is investing more than 300 million euro (just over $312 million) for construction of the plant.

“Even in challenging times, we must not lose sight of our goals. With the expansion of our aniline production, we are addressing the further increase in demand from our customers for energy-efficient solutions for the insulation of buildings and refrigeration appliances. At the same time, by using state-of-the-art technology, we are increasing the energy efficiency of production and thereby the competitiveness of the Antwerp site,” said Dr. Klaus Schäfer, Chief Technology Officer at Covestro. 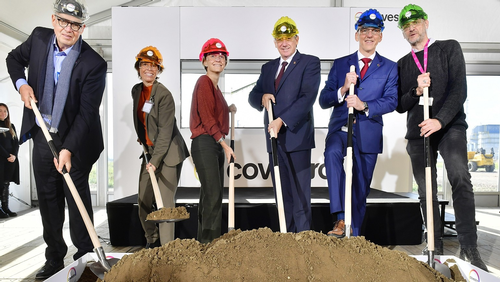 Covestro shares that the new plant will use state-of-the-art technologies that will play a major contribution in helping the company to meet its operational climate-neutral goals by 2035. Currently, roughly 20% of the steam required for production onsite is covered by using process heat generated during production. The remaining steam is generated using fossil resources.

With the new plant, the sharing of steam from process heat is expected to double to 40% of local demand, while the use of fossil fuels is expected to decline. The potential savings correspond to up to 27,000 tons of CO2 emissions per year.

The latest expansion is noted to be apart of Covestro’s global MDI strategy. In Brunsbüttel, Germany, Covestro already commissioned a new plant for the production of MDI using the particularly energy-efficient AdiP technology in 2020. In Tarragona, Spain, a new chlorine production plant based on the likewise particularly energy-saving ODC technology is nearing completion.

Antwerp Covestro Site Manager, Dr. Georg Wagner, was quoted as saying the investment is a crucial step for the company’s future.

“The groundbreaking ceremony for the expansion of our aniline production is an important moment for our site,” he said. “The capacity expansion will enable us to continue to ensure the sustainable and efficient supply of our MDI network in Europe. In doing so, we will continue to draw on the attractive infrastructure and logistics at the heart of the port, from where we also have direct access to the raw materials we need. This investment further anchors us here in Antwerp and also creates sustainable jobs for the future.”

Also recently, in July, Covestro broke ground or two new plants in Shanghai to meet the rising demand for polyurethane dispersions (PUD) and elastomers. According to the release, the new facilities will represent a combined investment of a mid-double-digit million euro amount and will be located within the Covestro Integrated Site Shanghai.

The PUD plant, including a line for polyester resins, is expected to be completed in 2024. These dispersions are used in coatings and adhesives in the automotive, construction, furniture footwear and packaging industry.

The polyurethane elastomer facility is expected to become operational in 2023. The elastomers, used in dinsturies such as offshore win, solar energy and material handling, have a growing market in China and the Asia-Pacific region, with Covestro noting that it is growing faster than both gross domestic product and downstream industries.

The company said it has invested 3.6 billion euro into building the Shanghai Integrated Site since 2001, comprising 11 plants and becoming its largest site in the world. It has also reportedly obtained the ISCC PLUS mass balance certification, meaning it can supply customers with larger product volumes from renewably attributed raw materials.