The changes made to the LEED v4 certification will more directly address carbon emissions and climate change.

“From day one, USGBC has been committed to the continuous improvements and advancement of green buildings standards. The new updates to LEED v4 affirm that climate is core to LEED,” said Peter Templeton, President and CEO, USGBC. “LEED certification has been a critical tool to help empower organizations to build and improve the conditions of buildings today that address climate change.”

Announced nearly a decade ago, LEED v4 made its formal debut in the industry in November 2013.

Under the upgraded green-building rating system, several paint and coatings credits would change and be required to undergo VOC emissions evaluations, in addition to changes in categories. The updated LEED v4 rating system was approved by some 86% of USGBC members earlier that year after the proposal survived a number of hurdles.

Previously, under LEED v2009 (the predecessor to v4), interior low-emitting paints and coatings applied onsite were eligible for a “Low-emitting Materials” credit. For LEED for Healthcare and LEED for Schools projects, the credit also covered products applied to exterior surfaces.

However, in LEED v4, the paint and coatings credit has been combined with those for three other low-emitting materials (adhesives and sealants, flooring systems, and composite wood and agrifiber products) into one category for “Low-emitting Materials.”

Achieving the “Low-emitting Materials” credit meant the project team could earn up to three points toward certification under the new rating system, said USGBC at the time.

The LEED v4 credit was designed to “minimize exposure to volatile organic compounds (VOCs),” according to USGBC. 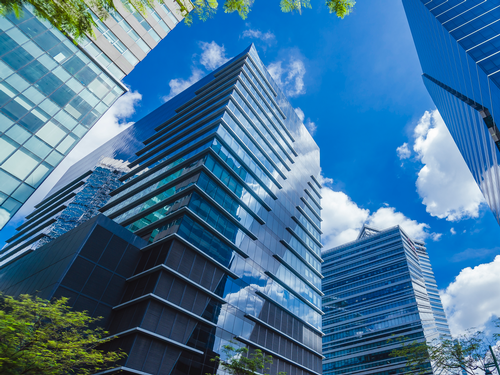 “Ideally, those involved in building projects should have a basic understanding of VOCs, know how to identify the VOC content in a product, and know whether the product has been tested for emissions,” the organization said.

Most major paint manufacturers now have low-VOC and zero-VOC paint and coatings options that would help achieve the revised credit requirements.

For the VOC emission testing requirement, products used must be tested and determined compliant in accordance with California Department of Public Health Standard Method v1.1-2010, using the applicable exposure scenario. The default exposure is the “private office scenario,” USGBC said.

The manufacturer’s or third party’s certification must indicate the exposure scenario used to determine compliance. Compliance claims for wet-applied products must state the amount applied in mass per surface area, the organization added.

Paint makers’ claims of compliance was also required to state the range of total VOCs after 14 days (336 hours), measured as specified in the CDPH Standard Method v1.1:

In addition to meeting the emission evaluation requirement, USGBC stated that onsite wet-applied products could not contain “excessive levels of VOCs” in order to protect the health of painters and other trades exposed to the products.

To demonstrate compliance, a product or layer must meet the following requirements, as applicable: First, manufacturers must disclose the VOC content of their products. Second, any testing must follow the methods specified in the applicable regulation.

In addition, for projects to receive the credit in North America, “methylene chloride and perchloroethylene may not be intentionally added in paints, coatings, adhesives or sealants,” according to USGBC.

For projects outside the U.S., all paints, coatings, adhesives and sealants wet-applied onsite must either meet the technical requirements of the above regulations, or comply with applicable national VOC control regulations, such as the European Decopaint Directive (2004/42/EC), Hong Kong Air Pollution Control (VOC) Regulation, or the Canadian VOC Concentration Limits for Architectural Coatings.

While the official launch of the full program occurred from Nov. 20-22, 2013, the USGBC had extended the LEED v2009 registration until June 1, 2015. Under v2009 and the other rating systems pre-v4, the low-emitting materials credits (IEQc4.1 and IEQc4.2) rely on VOC content only. There was no emission requirement.

Shortly after much of LEED v4 information was released, the USGBC shared that project teams who specified paints and coatings by manufacturers committed to material transparency could qualify for additional credits under its reformulated “Building Product Disclosure and Optimization” (BPDO) credit category.

Under the green-building rating system, paints and coatings are considered “permanently installed building products” and are therefore included in all three Building Product Disclosure and Optimization credits, USGBC says.

USGBC said at the time that the intent of the suite of BPDO credits—which features a maximum of two points each in each credit—was to “encourage the use of products and materials for which life-cycle information is available and that have environmentally, economically, and socially preferable life-cycle impacts.”

Organization officials said that disclosing information on product ingredients and processes would result in a faster and greater change in the marketplace, according to reports.

A few notes specifically on how paint and coatings can earn points toward project certification under the v4 BPDO alignment appear below, per USGBC:

By October 2014, the USGBC announced that its deadline for registering projects under the current LEED 2009 rating system was extended to Oct. 31, 2016. Two years later, in 2018 the LEED v4 was revised with the rigor of LEED v4.1, which raised the bar on energy and climate through its introduction of energy metrics on cost and greenhouse gas emissions.

Now, just under 20 years since it’s the establishment of LEED certifications, the standard has been adopted internationally for the design, construction and operation of high-performance structures.

“LEED v4 is designed to up the ante with a more flexible, performance-based approach that calls for measurable results throughout a building’s life cycle,” writes USGBC. “It also allows for a more streamlined user experience and more goal-oriented credits.”

According to USGBC, updates made to the primary version of the LEED green building certification program, LEED v4, will better enable Building Design and Construction (BD+C) and Interior Design and Construction (ID+C) projects to demonstrate improvement in energy performance with LEED v4.1’s and LEED v4’s evolving needs of the market and build on previous versions of the LEED rating system.

“LEED is powered by a community of volunteers that represent a spectrum of industries and professional expertise working groups and consensus committees,” wrote USGBC. “These volunteer groups will ensure that there are no gaps in knowledge or capacity as the work moves forward on LEED v5.”

A call for volunteers is expected to open in December.