A research team from the University of Helsinki in Finland is developing thin films needed to handle new types of halide perovskite solar cells. This coating technique reportedly provides increasingly affordable solar cells, enables their integration into objects and promotes the transition to renewable energy.

The research article was recently published in the journal Chemistry of Materials.

According to the university, most commercial solar cells are silicon-based and have Passivated Emitter and Rear Cell (PERC) technology. However, it notes, increasingly efficient, inexpensive and durable solar cells are being developed all over the world, leading to new solar cell technologies being investigated.

Of these, a new technique based on the use of halide perovskites as a light-absorbing material has shown promise, with the general chemical formula of halide perovskites is ABX3, where A is an alkali metal or an amine, B is tin or lead, and X is a halide. Another commonly studied compound is methylammonium lead iodide.

“As these new types of solar cells can be transparent, they can be installed in, for example, windows. They are also flexible, which increases their uses,” said Senior University Lecturer Marianna Kemell, who heads the research project. 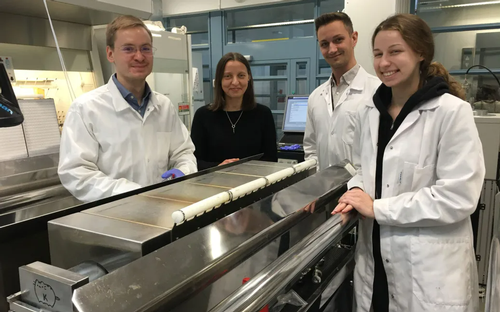 Perovskite solar cells are reportedly on track to be commercialized, but some problems with cell stability and the lack of industrial-scale production techniques have impeded their widespread adoption.

For his master’s thesis, Doctoral Researcher Georgi Popov chose the topic of halide perovskites and their atomic layer deposition (ALD).

“We identified suitable chemicals and were able to design a reaction that enabled us to create a metal iodide coating through deposition for the first time. We were able to demonstrate that this can actually be done through atomic layer deposition. The first successful trial was carried out with lead iodide, which was then processed into CCH3NH3PbI3 perovskite through a further reaction,” Popov said.

The university reports that coatings produced through ALD are used in roughly 30% of silicon-based solar panels. Adapting this technique to perovskite solar cells, the ALD group headed by University of Helsinki professor Mikko Ritala achieved promising results, with the coating forming a uniform and comprehensive layer even on rough surfaces.

“If at some point we start making tandem solar cells, which combine a silicon cell and a perovskite cell, we know how to make that perovskite. We are developing the recipes and the chemistry used to grow perovskite,” Popov said.

While the work currently being carried out is basic research, developing recipes and experimenting with small surface areas, the technique is reportedly applicable to large-scale production. China manufactures 80% of solar cell, as well as producing industrial-scale ALD devices, allowing them to easily adjust equipment to create the ALD-coated solar cells.

Additionally, a University of Helsinki Department of Chemistry alum works as for the leading Chinese manufacturer of ALD equipment, which the university said gives the department a solid grasp on where the field is going. It reports that ALD equipment used to produce silicon-based solar panels can also be expanded to produce next-generation solar cell materials.

“We are developing the future technical solutions that will gradually replace and supplement current production. In the future, fewer resources will be needed for production, and, thanks to increasingly effective cells, less surface area as well. When solar cells can be installed on uneven surfaces in addition to even ones, we no longer need to build solar parks in fields, as fields are needed for other purposes,” Popov noted.

“The best part of silicon-based cells is that they last roughly 20 to 30 years and will continue to function even after that, albeit possibly less efficiently. Since solar cells produced with the PERC technique are the current state of the art, and they are available, it is advisable to acquire as many of them as possible. They will pay for themselves,” Kemell said.

The project, titled “Atomic Layer Deposition as key enabler of scalable and stable perovskite solar cells,” will continue until 2024 funded by the Academy of Finland. Doctoral Researcher Alexander Weiss and master’s student Mariia Terletskaia are also working on the project.

Last year, a team of international researchers from ITMO’s School of Physics and Engineering and Tor Vergata University of Rome reportedly developed a new way to increase the efficiency of perovskite-based solar cells.

According to ITMO’s Department of Physics, the researchers developed a paste made from titanium dioxide (TiO2) and resonant silicon nanoparticles to serve as an additional layer in the process of producing solar cells.

The paste, which consists of Mie-resonant particles, reportedly made it possible to both control the amount of light absorbed and also increased the generation of photocurrent, allowing the team to bring the efficiency of solar cells up 21%.

The experiments were conducted on halide (MAPbI3) perovskites. However, because a MAPbI3 perovskites’ photoactive layer is only roughly 300-600 nanometers, it is incapable of absorbing all incoming light. They also can not be produced any thicker or else the light is dispersed more actively, resulting in a loss of energy.

One of two strategies can be used to boost the efficiency of perovskite-based solar cells: improving the charge collection or increasing light absorption.

Researchers went on to add that the trick to it all is that silicon nanoparticles of specific sizes are Mie-resonant. Because of this, the nanoparticles can amplify various optical phenomena, including light absorption and spontaneous radiation, working as a nanoantennae.

For it to work successfully, researchers conducted several theoretical calculations and built a model that accounted for electrophysical and optical properties of all layers and nanoparticles when subjected to external radiation and voltage.

Additionally, the team worked to identify the best location for the developed paste. In order to create thin films of controllably varying thickness and concentration, the solar cells are created using a spin coating method that involves sequentially applying liquid layers to one another.

According to the researchers, the developed paste is simple to apply and can be used with solar cells of any composition and configuration. At the same time, there are no additional complications to the production process, while the cost of the resulting devices increases by only 0.3%.

The project was supported by a grant from the Russian Science Foundation.