JFK Airport Breaks Ground on $9.5B Terminal One

The Port Authority of New York and New Jersey recently celebrated the groundbreaking of the $9.5 billion, privately financed New Terminal One (NTO) at the John F. Kennedy International Airport.

New York Governor Kathy Hochul, alongside several other elected officials, key sponsors and others involved with the project, formally announced the first phase of development at a ceremony on Sept. 8.

“Our state-of-the-art renovations of New York State's airports are critical and long overdue - especially at JFK, the nation's front door to the world,” said Governor Hochul. “The investments we are making today will ensure all New Yorkers, and the tens of millions of people who come here every year, have a first-class travel experience tomorrow - all while creating more than 10,000 jobs.

“Congratulations and thank you to everyone who has put in the years of hard work to make this transformative project possible.”

Initially unveiled in January 2017, the revamp plan for JFK revealed eight terminals to combine into one unified airport with the terminal complexes on the north and south sides. In addition, airport amenities, ground transportation and roadways were also set to improve. Overall, the airport’s capacity is estimated to increase by 15 million passengers a year. 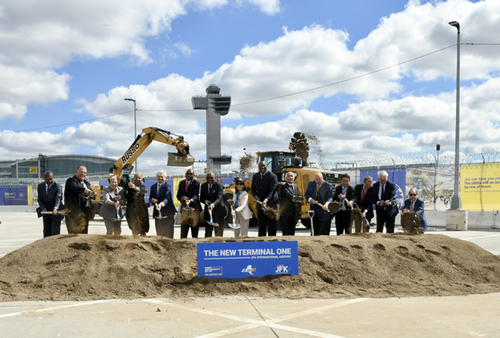 Carlyle
The Port Authority of New York and New Jersey recently celebrated the groundbreaking of the $9.5 billion, privately financed New Terminal One (NTO) at the John F. Kennedy International Airport.

A year later, it was announced that the new $7 billion, 2.9 million-square-foot terminal on the airport's south side would be developed by the Terminal One Group, a consortium of four international airlines—Lufthansa, Air France, Japan Airlines and Korean Air Lines. The initial plans called for replacing JFK's Terminal 1 and Terminal 2 as well as the area left vacant when Terminal 3 was demolished in 2014. It would also be connected to the existing Terminal 4.

At the end of October, the authority approved an investment of approximately $4.5 billion for three of its major projects, including $445 million for the JFK reno.

In February 2020, the Port Authority of New York and New Jersey reached an agreement on terms with Delta Air Lines for work on JFK International Air Terminal’s Terminal 4—a $3.8 billion renovation project. The work was for the expansion and renovation of Terminal 4, which originally included the addition of 16 new gates (500,000 square feet) and the renovation of existing concourses and roadway upgrades.

In May 2021, the Board approved an agreement on key terms for an amended plan for the JFK International Airport. The terms were with Delta Air Lines and JFK to expand Terminal 4 and consolidate Delta operations. The $1.5 billion project—reduced by about 60% to highlight key priorities because of COVID-19 impacts—is also being financed by private capital.

Delta currently operates out of both Terminal 4 and Terminal 2, and the expansion aims to allow Delta to offer a seamless travel experience by consolidating all of Delta's JFK operations into Terminal 4. The project will modernize and expand the existing terminal by about 150,000 square feet and will replace the 11 gates currently used at Terminal 2, which was built in 1962. That terminal will then be demolished.

The terminal is slated to be built on the sites of the former Terminal 6, which was demolished in 2011, and the aging Terminal 7, which has plans to be demolished after British Airways relocates to Terminal 8. The new terminal will connect to Terminal 5 and will be equipped with 10 gates, as well as check-in halls, arrival spaces and more than 100,000 square feet of commercial dining, retail amenities, lounges and recreational spaces.

Construction of this terminal is slated to begin in mid-2022, with plans to open the new gates in 2025.

According to the governor's office, the development of Terminal 6 is expected to result in over 4,000 direct jobs and direct payroll wages of $1.9 billion. The total economic activity impact from the project, including indirect effects such as the local market participation of employees of suppliers, amounts to nearly $2.8 billion in total wages and $6.3 billion in total economic activity.

Late in December, Gov. Hochul announced that an agreement with a coalition of financial sponsors had been reached to complete the $9.5 billion expansion of JFK International Airport. Slated to be the facility’s largest international terminal and building on the momentum of three additional expansion projects, the construction plans intend to replace existing Terminals 1 and 2 and occupy the site of the former Terminal 3, which was demolished in 2013.

The new terminal will be made up of 23 gates, upgraded check-in and arrival spaces, in addition to modernized lighting, lounge spaces, dining, retail and green spaces. According to reports, sustainability elements of the new terminal will include the deployment of solar, hot water, and fluid recovery technology. The airport will also receive a fleet of electric-powered ground service vehicles, which include baggage tractors and belt loaders.

The New Terminal One was initially scheduled to break ground in 2020, but due to the severe impact of COVID-19 on air travel, the terms of the agreement were restructured.

The full cost of the terminal will be privately financed by The New Terminal One coalition, which includes financial partners Carlyle, JLC Infrastructure and Ullico.

According to a press release issued by Gov. Hochul, construction on the transformation of JFK International Airport’s New Terminal One has officially commenced. The project is expected to generate more than 10,000 total jobs, including more than 6,000 jobs in construction.

One of the airport’s sponsors, Carlyle, shared that NTO will be the largest international terminal at JFK and is grounded in a commitment to engaging the local southeast Queens community, generating opportunities and reaching its 30% minority or women-owned business enterprises (MWBE) participation goal with intentionality.

Carlyle went on to note that before construction was launched, NTO was already under contract with 101 MWBE firms and paid more than $64.7 million for delivering professional services through key engineering, planning, construction and design work.

The terminal will be constructed by union labor under a project labor agreement that will generate family-sustaining careers, assist in small business development and drive workforce participation across Queens and western Nassau Counties.

As construction and design work is ongoing, the project will be overseen by Ferrovial, AECOM and Gensler.

“Today marks a historic new chapter for our city, for our state, and for the community of Queens and Southeast Queens in particular,” said Dr. Gerrard P. Bushell, Chief Executive Officer of the New Terminal One.  “When it is complete, this project will bring a world-class terminal that is sustainably designed and future-focused, and a new gateway to the world’s greatest city.

“Through our extensive partnerships with the community and labor, we will seek to drive historically high MWBE participation goals and deliver jobs and real economic opportunity for this community for generations to come.  Many thanks to my sponsors for their vision and steadfast commitment to getting this project out of the ground.”

The first phase, which includes the new arrivals and departures hall and the first set of new gates, is expected to open in 2026 while the entire expansion project is slated to reach completion by 2030.