Following the reverse and remand of an Ohio Supreme Court decision on Sept. 7, the Eighth Appellate District in Cuyahoga County, Ohio, has been asked by a group of insurers to reconsider its recent ruling regarding a lead settlement case.

The justices held that the insurer had no duty to defend because the government entities did not allege damages “because of” bodily injury.

Due to similarities in the cases, carriers—including underwriters at Lloyd's of London along with units of AIG, Chubb and more—who were ordered to cover The Sherwin-Williams Company's payment into a lead paint abatement fund in California, have filed a motion for reconsideration regarding lead paint coverage.

In 2000, Santa Clara County filed a lawsuit against NL Industries, ConAgra Grocery Products Co. and The Sherwin-Williams Company under California’s public nuisance law. (This case is commonly referred to as NL I.)

At the time, nine other California cities and counties were reported to join the action. Those plaintiffs included Alameda County, the City of Oakland, the City and County of San Francisco, the City of San Diego, Los Angeles County, Monterey County, San Mateo County, Solano County and Ventura County. 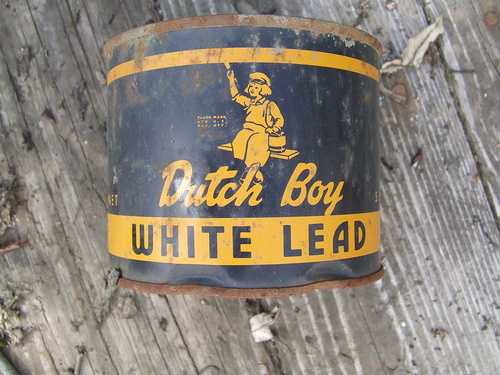 Thester11, CC-BY-3.0, via Wikimedia Commons
Following the reverse and remand of an Ohio Supreme Court decision on Sept. 7, the Eighth Appellate District in Cuyahoga County, Ohio, has been asked by a group of insurers to reconsider its recent ruling regarding a lead settlement case.

According to reports from that time, California governments claimed that the paint makers were aware of the dangers of lead-based paint as early as the late 1890s but sold lead-based paint to consumers without warning for decades.

Several years later, in February, it was announced that Sherwin-Williams, NL Industries and ConAgra Grocery Products were trying to reverse Kleinberg’s decision. The companies filed briefs Feb. 6, 2015, with the California Court of Appeals Sixth Appellate District.

In ConAgra’s appeal, the company argued that the trial court failed to apply correct legal standards in the case. NL Industries argued that the plaintiffs “tried to sidetrack” the appeal with an “inaccurate story” about the companies’ “place in the evolving knowledge of lead paint toxicity.” And Sherwin-Williams said that the plaintiffs failed to present evidence to support essential elements of the case and that the trial court misapplied legal standards to hold the company liable.

Then, earlier this year, on March 24, a five-judge panel concurred with New York County Supreme Court Judge Andrea Masley's December 2020 finding that coverage was triggered under at least some policies that did not have an exclusion for expected or intended losses.

According to reports, relationship issues between NL Industries and its insurers developed after the paint maker sought coverage for its share of the settlement amount from its insurers. As a result, the carriers filed suit to peel out of paying any amount of the settlement.

When the ruling was made to deny the insurers’ motion for summary judgment, Judge Masley noted that New York narrowly construed the exclusions' language. Additionally, the trial court judge pointed out that the California state court judge presiding over underlying public nuisance claims against lead paint makers never ruled that the companies acted intentionally.

As a result of the ruling, Lloyd’s of London and other insurers were declared liable to pay over $100 million into a California abatement fund regarding the sale of Dutch Boy lead paint by NL Industries.

On Sept. 1, the Civil Appeal from the Cuyahoga County Court of Common Pleas Case No. CV-06-585786 also declared that the insurance policy issued by Lloyd’s of London should cover the $101 million lead paint abatement fund.

The case was filed under The Sherwin-Williams Company v. Certain Underwriters at Lloyd’s London et al, case number 2022-Ohio-3031, in the Court of Appeals of Ohio, Eighth Appellate District in Cuyahoga County, Ohio.

“Just as the NL I court found, we find that an ordinary businessperson reading the policies at issue would believe that the abatement fund constitutes ‘damages’ under the relevant policy language,” the opinion read.

Although the latest decision doesn’t close the lawsuit officially, it does decide the question of whether the California court order amounts to “damages” covered by the policy. The appellate court remanded the case to the trial court to proceed toward trial.

According to reports, the decision ordering the firms to cover Sherwin-Williams' payment into a lead paint abatement fund in California is contrary to the Ohio Supreme Court's recent reasoning in an opioid coverage dispute.

In addition to asking the appellate court to reconsider its ruling regarding lead paint coverage, the carriers also went as far as to suggest that the panel should vacate its opinion and order that summary judgment be entered in favor of the insurers.

“Acuity rejected the basis for the panel's holding that the Santa Clara abatement fund was damages because of property damage or bodily injury,” the insurers wrote. “Acuity held, contrary to the panel's theory, that a remote causal connection to unspecified injuries by third parties does not suffice.”

The carriers went on to state that the damages in the case must be tied to specific bodily injury or property damage resulting from the defendant's conduct and “cannot be stretched to cover an insured's payments to prevent future harm.”

Furthermore, they add that the panel was wrong in denying summary judgment to the insurers because Sherwin-Williams expected or intended the harm and pointed out that the panel failed to consider the paint company’s knowledge.

In addition, “the panel committed a further obvious error by not considering whether the public policy bar for intentional torts precludes coverage here.”

In wake of the high court’s ruling and conflict with other districts, if the case is not granted a reconsideration, the insurers have requested that it be certified to the Ohio Supreme Court for resolution.

“The opinion held that even when an insured has ‘actual knowledge’ of the harm that will result from its intentional acts, the insured may still obtain coverage, thus reading the ‘substantial certainty’ test/expectation prong out of the insurers' policies and Ohio public policy,” the insurers said.

Sherwin-Williams continues to be represented by Mark Andreini and John Iole of Jones Day and by James Wooley of Hilow & Spellacy.

The case is The Sherwin-Williams Co. v. Certain Underwriters at Lloyd's London et al., case number CA-20-110187, in the Eighth Appellate District of the Court of Appeals of Ohio.