During a recent Allegheny County Council meeting, members unanimously approved the creation of a Department of Sustainability.

According to the approved ordinance, the new department will officially go into effect on Jan. 1, 2023.

Currently, the City of Pittsburgh does have an Office of Sustainability and sustainability manager—both of which report to the Department of Facilities Management—that oversees all of the county-owned nursing homes, office buildings and parks, among other structures and public spaces.

According to advocates, however, the creation of a Sustainability Department would only give the county’s sustainability initiatives more attention as well as their own line item in the city’s budget.

“Just having it a separate department might bring more accountability and also elevate the work that the county is presently doing,” said Anita Prizio, Chair of the County Council’s Committee on Sustainability and Green Initiatives. 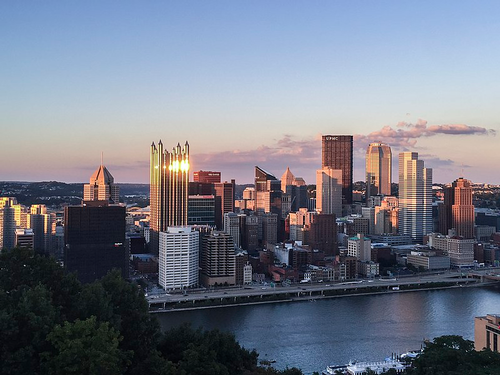 EEJCC, CC-BY-SA-4.0, via Wikimedia Commons
During a recent Allegheny County Council meeting, members unanimously approved the creation of a Department of Sustainability.

Work on creating a standalone department was first introduced in an ordinance published earlier this summer. Pittsburgh’s NPR news station, 90.5 WESA, shared that Chief Executive Rich Fitzgerald and all 15 members of Allegheny County Council collaborated on the ordinance.

As outlined in the ordinance, the new department would be tasked with establishing sustainability goals for each county department, evaluating if the departments reach these benchmarks, and authoring an annual public Report on Sustainability.

Once in effect, one representative from each existing county department would also be required to participate in an ad hoc “Country Green Team” to develop additional sustainability goals for the area. In addition, the Sustainability Department will be required to work with the county’s Purchasing Office to ensure other sustainable procurement practices are being upheld across all departments.

“The director of sustainability would report directly to the county manager instead of the facilities department,” Prizio added. “I think there is an opportunity to expand the county’s commitment to sustainability.”

At the beginning of September, it was announced that Allegheny County officials would be discussing the official establishment of a Sustainability Department to boost the county’s work on environmental issues in an upcoming meeting.

“This department will have a lot of say in how we can continue to improve things using best practices, but actually being intentional about what happens,” said County Executive Rich Fitzgerald.

“We don’t just open up a park system and let things go without any intentionality,” he added, noting that the eventual department head will likely be asked to give input on the “design and operation” for things like green infrastructure projects.

As a result of the new department, officials are also calling for the existing Office of Sustainability to be incorporated. It is unclear, however, how many employees will staff it.

When the Department of Sustainability begins its work, Prizio hopes it will tackle an ambitious agenda, including an updated assessment of the county’s greenhouse gas emissions and a county-wide climate action plan.

“It’s a start. It’s not going to solve all the sustainability issues, but it’s a start to have a department.”

Sustainability in the US

Other actions made to strengthen building performance standards include:

“The National Institute of Building Sciences reports that the adoption of hazard-resistant building codes saves communities $11 per every $1 invested,” Criswell said, at the time. “By modernizing building codes, we will not only save money by protecting people’s property and lowering energy costs, but we will also protect people’s lives by making our infrastructure more resilient to severe weather and the impacts of climate change.

To announce the National Initiative to Advance Building Codes, Criswell and Deputy National Climate Advisor Ali Zaidi traveled to Miami to meet with experts in climate resilience, building safety and efficiency on June 1.

According to a fact sheet released by the White House on the same day, the new building codes initiative will boost resilience to the impacts of climate change, lower utility bills for homes and businesses, and prioritize underserved communities.

The initiative sets out to help state, local, Tribal and territorial governments adopt the latest, current building codes and standards created to make communities more resilient to hurricanes, flooding, wildfires and other extreme weather events that are intensifying due to climate change.

The combination of efforts is slated to improve resiliency, create good-paying jobs and lower energy bills. Through the initiative, the Biden-Harris Administration will:

The Administration went on to note that communities that have already adopted modern building codes are saving an estimated $1.6 billion a year in avoided damage from major hazards, with projected cumulative savings of $132 billion through 2040—a figure that will become much higher if more communities adopt modern codes.

In a recent analysis where states were categorized based on building code uptake, FEMA found that 39 states fell into the lowest category—meaning that less than 25% of the state’s communities were covered by the latest hazard-resistant codes. On a nationwide scale, FEMA added that roughly 35% of counties, cities and towns have the latest codes in place.

To address this issue, in an all-of-government commitment made by the Biden-Harris Administration, key federal agencies will collaborate through a Mitigation Framework Leadership Group (MitFLG) to increase support and incentives for modern code adoption.

The federal government plans to achieve these goals by undertaking a comprehensive review of agency programs that support new construction or substantial rehabilitation of homes and other buildings, through grants, loans, funding, financing or technical assistance.

As part of this holistic review, which will be reported to the National Climate Task Force, additional specific efforts include: