At the beginning of the month, specialty chemicals company Evonik announced in a press release that it had opened an innovation hub at its site in Allentown, Pennsylvania.

According to Evonik, the hub consists of several state-of-the-art testing and processing labs, as well as a pilot plant. The space also features a newly designed collaboration area to better support a hybrid and creative work environment.

Designs of the space reveal that employees will have open areas to work onsite without needing individual offices. Employees will also have access to cutting-edge technology like digital whiteboards or tools for video conferencing.

“The collaboration space promotes interactions across our business lines and functions,” said Tracey Mole, Vice President Business & Innovation Center at the Allentown site. “It will shape the future of work at Evonik and contribute to our culture of innovation.” 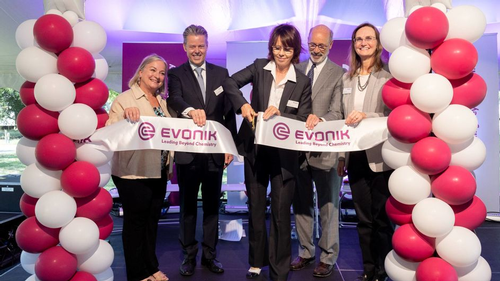 Evonik
At the beginning of the month, specialty chemicals company Evonik announced in a press release that it had opened an innovation hub at its site in Allentown, Pennsylvania.

The latest expansion is expected to create 50 highly paid jobs for scientists, engineers and lab technicians throughout the Leigh Valley region. Currently, Evonik employs 300 people at the Allentown site, which is close to Philadelphia, New York City and various research institutions.

The new hub is also a part of the company’s broader globalization strategy for Research, Development and Innovation (RD&I).

“We are strengthening regional RD&I hubs in Asia and North America to benefit from innovative ideas outside of Europe and be closer to our customers in those regions,” said Evonik Chief Financial Officer Ute Wolf at the Ribbon Cutting Ceremony for the Allentown Innovation Hub.

“The new Hub will transform the Allentown site into our premier center for research, business, and innovation in North America.”

Evonik's Chief Innovation Officer Ralph Marquardt added, “Addressing the global challenges of our time requires the worldwide collaboration of competent partners. North America has a thriving ecosystem for R&D due to world-class universities, innovative companies, and an entrepreneurial startup scene. We are looking forward to developing innovative solutions together.”

The company went on to explain that by 2023, Evonik intends to invest more than $3 billion in Next Generation Solutions, which are reported to be products with superior sustainability benefits. Evonik notes that it is also planning to invest an additional $700 million in Next Generation Technologies to optimize production processes and infrastructure and avoid carbon emissions.

Having contributed roughly a quarter (23%) to Evonik’s annual sales in 2021, the company shares that North America is an essential growth market. Since 2017, Evonik has invested several billion dollars in North America. Many of these investments were due in part from when Evonik acquired the specialty additives business of Allentown-based industrial gas producer Air Products.

“Allentown has been an increasingly important part of our footprint ever since,” said Bonnie Tully, President North America region. “The opening of our Innovation Hub marks the next phase of our growth trajectory in North America.”

According to Evonik, the new High-Performance Polymers lab in Allentown will allow for the processing and testing of plastics for 3D printing, medical implants or performance foams in airplanes or cars. The additional lab will also enable the formulation and testing of additives for industrial coatings.

“Evonik’s new, state-of-the-art space will build on Pennsylvania’s strength as a center for advanced manufacturing,” said Pennsylvania Governor Tom Wolf. “I’m proud to have invested $2.5 million in this Innovation Hub that will bring new, good-paying jobs to the Allentown region.”

“I am proud to see international companies like Evonik recognize the strategic strengths of having a significant presence in Allentown,” added Rep. Susan Wild. “With our proximity to major metropolitan areas, highly skilled workforce, and long history of embracing manufacturing and innovation, we are poised to ensure Evonik’s next phase of growth results in success for Evonik, our economy, and the community.”

In its press release, Evonik also shared that it recently donated $100,000 to support the Women in Science & Engineering (WISE) initiative of the Da Vinci Science Center, Allentown’s award-winning science museum.

WISE was established as part of the Science Center's broader commitment to supporting women and girls in STEM (Science, Technology, Engineering and Math). The donation highlights Evonik's ongoing support of education and diversity in STEM fields.

In April, Evonik announced the launch of an industry-wide network that users will be able to utilize when conducting joint product searches for coating formulations.

Joined by Lanxess and Synthomer, Evonik reports that the unique product search for the coatings industry, dubbed COATINO, aims to transparently bundle all the information needed to formulate the optimum coating easily in one single space.

COATINO is reported to offer specialty additives from Evonik, polymer resin binders and dispersions from Synthomer, and iron oxide pigments from Lanxess, with products from other suppliers to follow. In addition to additives, binders and pigments, in the future other materials like fillers for example will also be included in the network.

According to the Evonik, a total of 15 companies already belong to the formulation network. The partners do not only include raw material producers, but also hardware and equipment manufacturers, as well as technology and media companies.

When in the system, the company reports that users can choose between different raw material classes and manufacturers, but also set filters to search for the essential product properties they require. From there, the user will get access to detailed product information such as technical, regulatory or safety data sheets. There is also the option of easily ordering free samples or contacting the manufacturer directly.

After a desired product has been found, COATINO provides guiding formulations or can even calculate completely new formulations.

And back in November, it was announced that Evonik Wynca Silicon Material Co., Ltd., a joint venture of specialty chemicals company Evonik and Chinese company Wynca, launched operations at its new fumed silica plant in the Zhenjiang New Material Industry Park in Jiangsu, China.

More than 150 participants, including employees from Evonik and Wynca, partners, government and media representatives, attended the opening ceremony in October.

According to Evonik’s press release on the start-up, the plant is the company’s first fumed silica production site in the country and was created to produce fumed silica, an important functioning material for thickening, thixotropy, anti-precipitation and matting.

The material is commonly applied in industrial applications such as silicones, coatings, adhesives and sealants. The material will be marketed under the brand name AEROSIL.