The National Aeronautics and Space Administration recently announced that it has selected three companies to work on deployable solar array systems for exploration on the Moon. A total of $19.4 million has been awarded to build prototypes and perform environmental testing.

These systems are expected to help power both human and robotic lunar exploration through Artemis missions, with a goal of establishing long-term presence near the lunar South Pole. To provide a reliable and sustainable power source, NASA reports it is supporting the development of vertical solar arrays that can autonomously deploy up to 32 feet high and retract for relocation if necessary.

“These prototypes will provide promising solutions for reliable power sources on the Moon, which are key to the success of almost anything we do on the surface,” said Niki Werkheiser, Director of Technology Maturation in NASA's Space Technology Mission Directorate (STMD) at NASA Headquarters in Washington.

“This exciting effort plays a critical role that will quite literally help power our Artemis exploration in the uniquely challenging environment of the Moon's South Pole.”

The designs must reportedly remain stable on sloped terrain and be resistant to abrasive lunar dust, all while minimizing both mass and stowed volume to aid in the system’s delivery to the lunar surface. The goal is to deploy one of the systems near the Moon’s South Pole near the end of this decade. 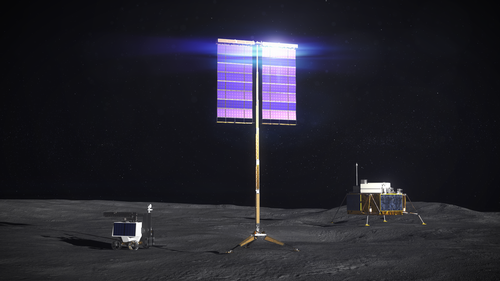 NASA
The National Aeronautics and Space Administration recently announced that it has selected three companies to work on deployable solar array systems for exploration on the Moon.

According to the release, the awards include:

NASA reports that existing space-rated solar array structures are designed for use in microgravity or for horizontal surface deployment, but the vertical orientation and height of these new designs will help prevent loss of power at the lunar poles where the Sun does not rise very far above the horizon.

The Moon’s terrain can block some of the Sun’s light when it is low on the horizon, preventing it from reaching solar rays that are low to the ground. By placing the solar arrays on tall masts, these designs reportedly allow for uninterrupted light and producing more power.

“We are very excited to be able to select these three teams as they all bring very different technological solutions as well as unique visions for how commercial space can support a sustained presence on the Moon,” said Chuck Taylor, VSAT project manager at NASA’s Langley Research Center in Hampton, Virginia.

In March, NASA announced the selection of three university-led proposals for the development of technologies for living and working on the Moon. According to NASA, the proposals awarded for the research will look into the extraction of lunar resources, autonomous construction methods and developing electronics capable of working under the Moon's extremely cold temperatures.

Each proposal was selected under the second Lunar Surface Technology Research (LuSTR) solicitation and aims to harness the creativity of the nation's university researchers to cultivate technologies for lunar infrastructure. LuSTR is part of NASA's Space Technology Research Grants program, which supports groundbreaking research in advanced space technology by academic researchers.

Tasked with the goal of developing robots capable of completing construction projects, such as building habitats and landing pads, is The Colorado School of Mines. This effort is being led by principal investigator Christopher Dreyer, who plans to develop tools and methods for autonomous construction on the Moon's surface.

While construction will be an important aspect of staying on the Moon for long periods of time, NASA has realized that sending supplies from Earth will be expensive and time-consuming. It is that reason that they have awarded Missouri University of Science and Technology for in-situ resource utilization. For this research, led by principal investigator Leslie Gertsch, teams will work to develop magnetic and electrostatic technologies for extracting and efficiently separating calcium- and aluminum-containing minerals from the Moon's soil, also called regolith.

Another obstacle that astronauts will have to face while working on the Moon is the planet’s extremely cold temperatures, which have been reported to plummet hundreds of degrees Fahrenheit below zero at night or within cratered areas that never see direct sunlight. Auburn University, led by principal investigator Michael Hamilton, has been awarded for the development of new electronics that are highly reliable and tolerant of low temperatures.

Each team will receive up to $2 million, awarded as grants, over two years to develop their proposed technologies.

According to reports, LINA is part of NASA’s 2020 Announcement of Collaboration Opportunity (ACO) project Relevant Environment Additive Construction Technology (REACT). AI SpaceFactory is noted to be one of 17 companies selected by NASA's Space Technology Mission Directorate to participate in the 2020 ACO, alongside Blue Origin and SpaceX, among others.

The structure, which will be 3D-printed on the Moon’s southern pole near the Shackleton crater, was designed in collaboration between AI SpaceFactory and the NASA Kennedy Space Center (KSC). The main material for constructing the lunar outpost is an original polymer developed by the firm, created using a Martian regolith simulant, that was then modified to use lunar regolith.

Also known as lunar soil, the polymer, its material composite and mechanical extruder are slated to be tested in a NASA vacuum chamber that simulates the environmental conditions on the Moon. Based on these results, AI SpaceFactory will be able to inform a sustainable 3D printing system that will be used to print LINA on the Moon.

According to reports, LINA will be made up of 3D-printed Romanesque arches and topped with 2.7 meters (8.86 feet) of lunar regolith. Not only will the arches be able to withstand high compressive loads with minimal material, but the lunar soil will also protect the structure from radiation, micrometeorites, lunar seismic activity (moonquakes) and extreme thermal swings.

After the construction materials have been 3D printed and compiled, autonomous robots will build LINA. Placed near the Shackleton crater for good reason, the lunar outpost will be able to harness solar power from the area’s almost continuous sunlight, while still being able to use its shadowed areas for the harvesting of water ice.

In addition, AI SpaceFactory and KSC are also advancing other prize-winning technologies and materials previously created for NASA’s 3D Printed Habitat Challenge to use on the Moon. It is believed that the strength of AI SpaceFactory's polymer composite will support LINA's geometry for a sustainable and long-lasting structure that could support long-term habitation and further travel to more planets.