According to the emailed release, it is not required to wet the wick each time a reading taken, but rather the sling psychrometer contains a slide rule calculator which correlates wet and dry bulb thermometer indications for direct reading of relative humidity.

The company reports that the Bacharach Sling Psychrometer consists of two thermometers, a dry bulb and a wet bulb, that are turned by vigorously swinging the handle and exposing the thermometers to rapid air movement. One bulb is placed in direct contact with the room air to measure dry-bulb air temperature, while the other is covered with a silk or muslin sleeve to record the wet bub temperature. 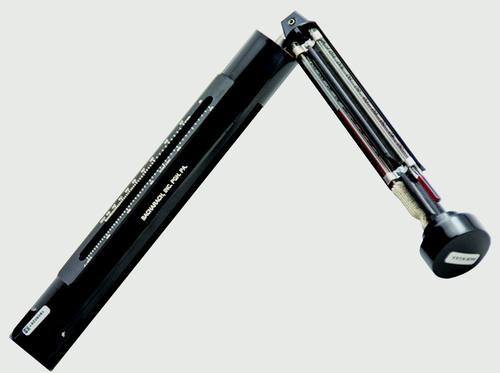 Then, evaporation cools the wet bulb more than the dry bulb, obtaining a humidity as a function of change in temperature. The atmospheric humidity is determined by calculations, steam tables or using a psychrometric chart.

The tool was reportedly design for portability at 7.5 inches long and a one-inch diameter, as well as a built-in water reservoir to hold water for several hours of testing. The thermometers are also constructed of shock-resistant glass, and the stems have deep-etched numerals and one degree scale divisions for easy reading.