According to the release, the pair of ships were fully applicated in early 2019 and 2020, followed in mid-2020 by subsequent pandemic-enforced 18-month anchorage. In-water inspections were conducted in late 2021 showing that the hulls were in conditions that “exceeded expectations.”

In May 2019, Nippon announced the successful application of Aquaterras to AIDA Cruises’ 38,531gt cruise vessel, AIDAcara. The decision to use the coating followed successful testing using test patches on Carnival cruise ships.

The vessel was drydocked in February, at CNdM Marseille, France, where workers carried out surface preparation with full hydro-blasting. All underwater areas of the ship's hull were coated with Aquaterras.

“This application is the result of a long-standing project with Nippon Paint Marine to find an environmentally sustainable way of reducing ships’ energy consumption,” said Jukka Ignatius, Superintendent, Innovation & Energy Management, Carnival Maritime GmbH, at the time. (Carnival Maritime is responsible for both the technical and nautical operation of AIDA ships.) 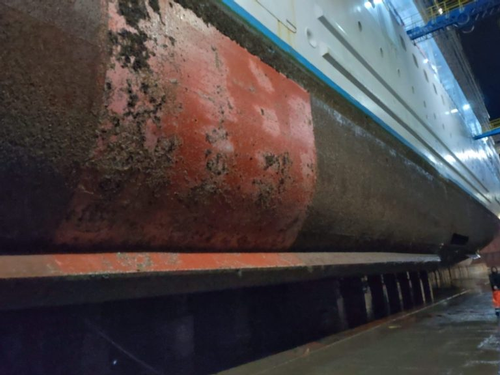 “The feedback from joint testing and in-water inspections of test patches applied to our ships over the past three years has shown Aquaterras to be an effective antifouling that does not leach hazardous biocides into the water column. The expected reduced frictional resistance also helps towards reducing fuel consumption and, consequently, emissions, which is very much in keeping with our overall strategy of reducing the impact of operations on the marine environment.”

Aquaterras, which does not have any heavy biocidal pigments, active ingredients or silicone, is based on a mix of hydrophilic and hydrophobic components, similar to what is used in the creation of artificial hearts and blood vessels.

According to Nippon, Aquaterras can reduce fuel consumption by more than 10% in comparison with other, more traditional SPCs. This is largely attributed to the coating’s smooth surface and low friction. The coating can be applied to ships over biocidal SPC antifouling paints. Other SPC antifouling paints can also be applied over Aquaterras, without the latter being removed.

“After application, surface roughness measurements were as low as 40µm and averaged 63µm, but since Aquaterras is self-polishing the overall hull roughness should become even lower as the vessel continues on its regular operations,” noted John Drew, Director, Nippon Paint Marine.

As part of the inspection, photographs were taken of the coating on the hulls on other cruise ships, bulkers, tankers and containerships laid up in the Philippines, Bahamas, La Spezia and the Sea of Marmara. These also showed areas of “excellent antifouling performance.”

Photographs taken by divers inspecting one cruise ship coated with Aquaterras in the Bahamas showed no fouling on the vessel after 20 months of static operation. A test patch on an SPC coated cruise ship, which also sat idle for 20 months off La Spezia, Italy, showed near-zero fouling.

“Prior to the COVID-19 outbreak, we had two full hull Aquaterras applications on cruise ships,” said Drew. “Now, demand is growing, and we have had to increase production to meet that demand.”

Drew noted that, typically, antifouling paints rely on a certain amount of ship movement to kick-start fouling control mechanisms. However, the pandemic prevented cruise ships from going to see or left their moorings only to make fresh water, which did not provide enough operational activity to activate the antifouling process, leading to the risk of fouling.

Nippon reported that ships coated with silicone-based paints, hard coatings and regular Self-Polishing Coatings (SPCs), including the company’s own A-LF-Sea range, were unable to compete with the Aquaterras results. Extensive growth build up was reportedly common during the pandemic hiatus.

“Some cruise ships had so much fouling when they started operating again that they suffered vibration as well as significant drag and excess fuel-consumption. However, despite extensive idling and static operation in warm and temperate waters, this coating kept the hulls of these ships extremely clean,” said Drew.

“One major cruise line underwent stringent test programs for over four years before its first ship’s hull was fully applied with the coating,” affirmed Niko Yamanoue, General Manager, Nippon Paint Maine (Europe). “In-service performance monitoring gave the operator confidence to apply Aquaterras another ship just before the pandemic hit. It kept the hull clean even during the biofouling challenges of the pandemic.”

“It has an extremely smooth and glossy finish. It’s much easier to apply than a silicone but its smoothness, self-polishing and resistance to fouling combine to lower hull friction. The Covid pandemic has proven the coating’s performance even in static conditions. The product goes beyond compliance but also its performance goes beyond our expectations,” said Johan Wilckens, Managing Director, Nippon Paint Marine (Europe).

“We anticipate it will become the benchmark eco-friendly antifouling, allowing ship-owners to reduce underwater cleaning, save fuel, lower carbon emissions and mitigate the ecological damage from biofouling and species migration. The technology in this coating is way ahead of its time. Aquaterras gives us a ten-year head start on the competition.”

In addition to cruise brands specifying antifouling, the self-polishing coating is reportedly being looked at by container lines and navies. Wilckens stated there are several navies currently carrying out static and dynamic tests as the operational requirement of naval vessels means they are often idle or alongside for extended periods.

“It can give those early adopters the edge in a hugely competitive sector,” said Wilckens. “It not only strengthens their green credentials but illuminates the way forward for operators of other vessels across all maritime sectors.”

In May last year, the coating was awarded the 2021 GREEN4SEA Technology Award, hosted by SAFETY4SEA, a European non-profit organization that “fosters, enlightens and promotes the marine environmental awareness.” Established in 2016, the GREEN4SEA Awards are an environmental accreditation program that recognizes corporations that contribute to maritime industry from various aspects.