Earlier this week, the U.S. Navy announced that it was standardizing wages for federal painters across all four public shipyards. The wage-grade increase is scheduled to take effect this month.

According to the release, the effort to standardize wage potential was led by the Naval Sustainment System–Shipyards (NSS-SY) People Pillar and required the coordination of the public shipyards, the Fleet and Defense Civilian Human Resource Offices. The increase is the first for top-tiered federal painters in 60 years.

While the previous top tier wage grade for federal painters fell at WG-9, the Naval Sea Systems Command Office of Corporate Communications has announced the grade has now been set at WG-10. The increase will reportedly affect approximately 145 shipyard painters. 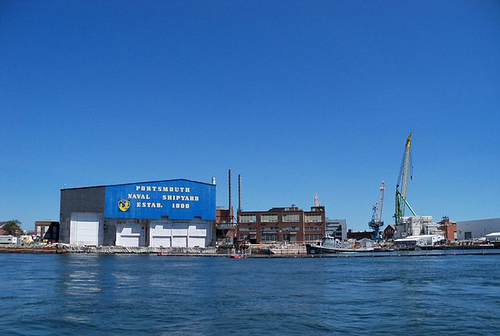 AlexiusHoratius, CC BY-SA 3.0, via Wikimedia Commons
Earlier this week, the U.S. Navy announced that it was standardizing wages for federal painters across all four public shipyards.

“This is an important win for the People Pillar,” explained Rear Adm. Scott Brown, NSS-SY’s People Pillar lead. “NSS-SY is focused on delivering submarines and aircraft carriers out of maintenance availabilities on-time, every time. Foundational to that is ensuring our production and engineering professionals have what they need to do their job in a safe and efficient manner.

“Ensuring our top performers are paid appropriately not only rewards their years of dedicated service, but allows us to retain our senior tradespeople who can train and mentor our newest employees.”

Brown also explained that the painting and coatings used now require “significantly more training and expertise” than when the previous wage grade system established. The coatings work is completed to preserve metal surfaces exposed to the sea water, while their application must be done with specific environmental controls that account for heat and humidity. The paint must also be applied within thousandths of an inch to ensure proper adhesion and protection of the surfaces.

“Being a painter in a naval shipyard requires our people to be equal parts technical expert and artist,” Brown said.

“People are our number one priority, and everything we do within the NSS-SY construct is focused on ensuring our skilled shipyard personnel have what they need to do their job,” said Ms. Giao Phan, NAVSEA’s executive director. “We need to pay our people what they’re worth, and this is a real step toward that ultimate goal.”

The Navy reports that the People Pillar is taking a holistic look at the current wage grade compensation scale with the ultimate goal of bringing it up to industry standards.

“We’re working with the Office of Personal Management to conduct wage surveys at the four shipyards,” said Brown. “Once we have that we’ll be able to determine what is required to ensure our skilled tradesmen and tradeswomen are paid equal to their counterparts in private industry.”

“Ensuring our people are paid properly is second only to their safety, and it is a very close second,” said Vice Adm. Bill Galinis, NAVSEA commander. “I have had the opportunity to share what we are doing in this area with members of Congress, specifically the recently formed Congressional Public Shipyard Caucus, and will continue to do so as our plans mature so we can properly compensate and retain our people.”

Earlier this year, in May, the Norfolk Naval Shipyard in Portsmouth, Virginia, was named the Center of Excellence for inspecting and servicing anchor chains for the United States Navy. NNSY is the U.S. Navy’s oldest shipyard and the largest on the East Coast.

Within the shipyard, Shop 11F, Shop 71 and Shop 72 work together to service chains for submarines and other vessels in the Navy’s fleet by forging, painting and rigging, respectively.

When a chain is delivered to NNSY, it is brought into the shop to begin stripping the paint with the wheelabrator and cleaning it for service. A lead mechanic then reportedly performs and inspection on the chain for refurbishment.

Naval Sea Systems Command (NAVSEA) reported that Shop 11F houses the chains and performs the inspections, and then coordinates with Shop 72 when riggers and crane operators are needed to perform lifts. Additionally, Shop 71 makes sure that the chains are painted under specific conditions.

This past winter, the team completed one of its “most complex jobs” on a USS Philippine Sea (CG-58) anchor chain. According to the release, NNSY was able to overcome the challenges presented and succeed in its refurbishment.

Additionally, at the time, the team was working on the USS John C. Stennis project, which included working on chains, or shots, that were 85 to 95 feet in length with each link weighing 300 pounds.

Last month, the Fleet Readiness Center East assisted the U.S. Coast Guard in figuring out how to remove organic coatings from aircraft parts without certain chemicals or other common paint removal methods. The U.S. Coast Guard Aviation Logistics Center (ALC) in Elizabeth City, North Carolina, reached out to the FRCE to find a solution for removing the coatings, as well as help catch up on a backlog of parts following the establishment of new procedures.

ALC environmental protections processes only allow certain chemical strippers, which are not always effective at removing the coating. Additionally, maintenance manuals also state that paint removal methods like blasting or sanding cannot be used on parts that require non-destructive inspections for cracks after stripping.

“Often, the technical manuals we use will state chemical stripping only, which means we can’t use sanding, because you don’t want to remove material. You don’t want to blast with plastic media because it can leave traces of the coating and the media, which can get embedded and reduce detection of cracks or defects in the part,” said Chief Warrant Officer 3 Hayward Workman, Industrial Operations Division Engineering Support Branch Chief.

“Chemical stripping was the only way to remove the coating and be in accordance with the procedures, but it was impossible with the kind of strippers that were available at the ALC. That’s when I reached out for help from FRCE.”

According to the U.S. Navy’s release, Workman reached out to Chris Gladson, Materials and Processes Branch Head at FRCE for suggestions. Gladson then invited Workman and his team to tour the paint stripping facilities at FRCE and to brainstorm on solutions to the Coast Guard’s problem.

While the FRCE and ALC were reportedly using similar methods of paint stripping, differences in Coast Guard and Navy regulations allowed FRCE artisans to generate a higher throughput than those at ALC, Gladson said.

Workman presented the information from FRCE to ALC safety and engineering teams, justifying the conclusion that more aggressive stripping agents could be used safely and effectively to remove the more resistant coatings from parts. As a result, ALC adopted similar procedures and safety equipment used at FRCE.