A team of civil and environmental engineers from the University of Notre Dame (ND) is working to make homes more resilient to climate change and worsening natural disasters.

The study, led by professor of civil and environmental engineering and earth sciences and global affairs Tracy Kijewski-Correa, aims to create a new framework for community recovery, educate homeowners on risks and encourage incentives for residential upgrades.

“Coastal homeowners are largely unprotected right now,” said Kijewski-Correa. “In the last two years, we’ve set records for the number of billion-dollar loss events. We need to drive more proactive investment because right now, the mounting losses in our coastal communities has bankrupted insurance systems. We’ve created a culture of safety netting that reacts to symptoms without addressing the root causes.”

Research is reportedly taking place in Lake Charles, Louisiana, and is being funded through the National Science Foundation’s Strengthening American Infrastructure program.

In a recent news release, ND shared that the National Oceanic and Atmospheric Administration expects up to 10 hurricanes this season, with as many as six storms between Category 3 and Category 6. The level of force is expected to negatively impact residential and commercial infrastructure in coastal regions.

Just as Kijewski-Correa stated, while hurricanes in the past have been reported to cost around $28 billion annually, that number is expected to increase to $39 billion. 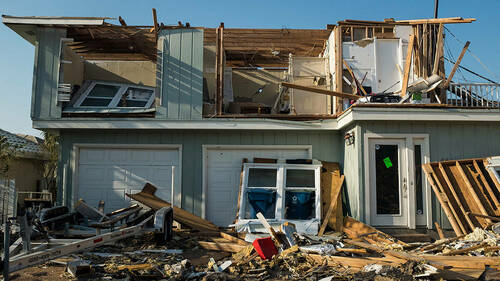 The researchers believe that the insights and analysis collected from the survey could help inform solutions to flaws in insurance and regulatory systems outpaced by the current rate of climate change. Previously, the duo found that homeowners were failing to use insurance payouts to invest in structural upgrades and that many of the homes remained minimally protected.

“Eight of the 13 coastal states most in harm’s way don’t have binding, statewide building codes,” Kijewski-Correa said. “Even when codes are adopted, people don’t realize that building codes aren’t intended to prevent damage in major hurricanes — which creates losses for the home.

Kijewski-Correa went on to say that one day, she hopes that real estate companies would offer incentives for resiliency similarly to credits for sustainable practices like LEED certification.

“It could be very promising if we can get property values to reflect investments in safety and not just aesthetics or amenities,” Kijewski-Correa said. “We can’t keep doing this. It’s not sustainable. All of this research is to figure out, in the areas that are getting hit hardest, how do we encourage homeowners to buy into the idea of getting ready ahead of the storm — because climate change is here.

“The effects are acute. And if we don’t shift our thinking, homeowners expecting insurance companies or FEMA payouts will be out in the cold.”

The team hopes to complete the collection of data in Lake Charles and have initial insights by the end of the 2022 Atlantic hurricane season.

In addition to the research being conducted in Louisiana, Kijewski-Correa has also coordinated engineering teams on the ground to assess residential and commercial damage caused by hurricanes, earthquakes, tsunamis and other destructive windstorms in locations around the world. The assessments will be compiled and studied by the Structural Extreme Events Reconnaissance (StEER) network, of which Kijewski-Correa is the Director.

While both studies are ongoing, ND reports that Kijewski-Correa is also the co-principal investigator on a separate $12.8 million project led by Florida International University to design a testing facility capable of simulating the combined effects of a major hurricane’s force on full-scale structures for the first time.

Last month, U.S. Vice President Kamala Harris announced more than $1 billion in federal spending for disasters to be made available through a series of grants.

The grants—awarded to states to help communities across the nation prepare and respond to natural disasters—arrive in wake of the recent deadly flooding experienced in Kentucky and California wildfires.

According to reports, the Building Resilient Infrastructure and Communities (BRIC) program is funded through FEMA’s Disaster Relief Fund and the bipartisan infrastructure law signed by President Joe Biden last year.

The program will support states, local communities, tribes and territories on projects aimed at reducing climate-related hazards and preparing for natural disasters, such as floods and wildfires.

The allotted $1 billion in funding is noted to be double what was provided last year. In addition, the program will also be offering another $160 million for flood mitigation assistance.

In a statement, President Biden reported that spending for disaster relief and preparations would be doubled yet again in the budget year (which begins in October), totaling $2.3 billion for communities.

The funding will be awarded through programs like BRIC and others administered by FEMA, the Department of Health and Human Services and other agencies sharing the goal of reducing heat-related illness and protecting public health.