Study Tests Tires for Architectural Use

Researchers from the University of South Australia have recently conducted a series of tests to observe how end-of-life tires might be utilized in widespread architecture.

According to the university, the tires were verified for structural integrity and were used to construct walls. As a result, the researchers found that the tires, which were packed with earth to create the walls, could potentially provide new opportunities for the reuse of end-of-life tires in the construction industry.

In a news release, the University of South Australia reports that tire waste represents a sustainability challenge globally, with Australia generating an average of 55 million (450,000 tons) of end-of-life tires each year by itself.

The country has reportedly been using earth-packed tire walls in niche construction for decades, however, there has never been any empirical research conducted on the practice. Due to the lack of supporting data, not many engineers or architects have adopted the material on a wide range of projects. 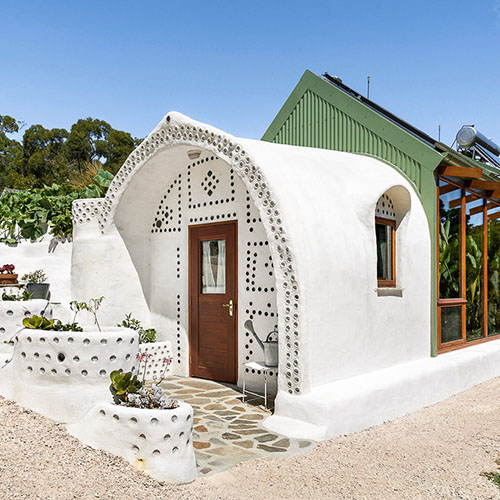 “The wall we tested was the first of its kind to be scientifically tested in this fashion, and all the data indicates tire walls can be extremely strong and safe structures,” said Freney. “While that structural integrity has been observed for many years in applications such as the retaining walls in earth-sheltered, Earthship homes, the lack of supporting data has prevented wider uptake of tire walls by engineers and architects, and we’re hoping this study will change that and expand the range of projects in which these walls are used.”

While the study only tested one real-world wall as part of the project, Xu was reported to have developed the software models which allowed the data obtained to be extrapolated to other designs, making the results applicable to a wide range of scenarios and stakeholders.

In considering other uses for the material, Freney suggested several unique structural characteristics where the use of tire and earth walls could be more beneficial over traditional building approaches, particularly for retaining walls.

“Not only are the tire walls as structurally sound as concrete or wood sleeper retaining walls, they are also extremely resilient,” Freney continued. “Unlike a concrete wall, we found these walls have the ability to ‘bounce back into shape’ following impact, such as from an earthquake.”

“And if a drainage material such as recycled concrete rubble or crushed bricks is used to fill the tires, they also offer excellent drainage, which can be a major consideration in many retaining wall scenarios. Furthermore, the use of recycled fill materials reduces the environmental impact of the wall.”

In closing, Freney said that he and his team really believe the research provides strong evidence for the expanded use of tire-based walls in housing and other applications. In the next steps, the research team is planning to engage with industry partners to develop a range of real-world applications for tire walls.

This research study was supported by Tire Stewardship Australia.

A team from the Royal Melbourne Institute of Technology (RMIT) University reported they have replaced 100% of conventional aggregates in concrete with rubber from discarded tires to promote a circular economy.

According to the study that was recently published in the journal Resources, Conservation & Recycling, the engineers say the new greener, lighter concrete also can reduce manufacturing and transportation costs significantly.

While small amounts of rubber particles from tires have previously been used to replace concrete aggregates, RMIT reports that the rubber replacements have produced weak concretes that fail to meet the required standards.

Lead author and PhD researcher from RMIT University’s School of Engineering, Mohammad Momeen Ul Islam, said the findings debunked a popular theory on what could be achieved with recycled rubber particles in concrete.

About 1.2 billion waste tires are expected to be disposed of annually worldwide by 2030. Li added the new concrete could also greatly reduce manufacturing and transportation costs.

For its next steps, the team is looking into reinforcing the concrete to see how it can work in structural elements.

The researchers hope the process could be scaled up cost-effectively within a precast concrete industrial setting in Australia and overseas. The university added that several national phase patent applications have been filed for the process.