A new virtual reality lab for civil engineers at the University of Dayton (UD) is being utilized to “bring buildings to life.”

Dedicated on Aug. 19, the Greg and Annie Stevens Intelligent Infrastructure Engineering Lab, located within the School of Engineering's Kettering Labs, will allow students to better understand a building’s placement and operation before construction commences.

“I hope this gift helps elevate the technological edge of the UD School of Engineering. This new modeling simulator and innovation space will provide a unique high-tech tool to learn the new methods of designing for the future," said Greg Stevens, who earned a B.S. in civil engineering from UD in 1993.

“Building in detail in a virtual environment is critical to meeting the budget and timing constraints of large projects. And giving this skill to UD engineering students before they leave the classroom will provide them with highly valuable experience as they transition to the workforce.”

According to the university, students will be able to upload blueprints, sensor data and other computer-aided design drawings into the system, which then generates a virtual facility in which users can float up, down, side-to-side, through walls, onto the roof or into the basement similar to 360-degree theaters or amusement park rides.

The lab is also capable of allowing students to test how environmental conditions might affect a structure. Robert Liang, UD civil and environmental engineering and engineering mechanics department chair added that the lab could also be used to “change detection” or compare a structure to what it might have been, to its current existence—such as in the situation of a collapse or other experienced damages. 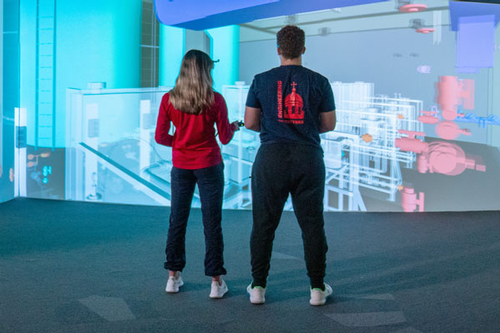 “In the real world, it's difficult to fly around an object other than using a drone, but in a virtual environment, once data are collected, we can inspect any structure, inside or outside, and zoom in and out at our wish,” said Hui Wang, UD assistant professor for civil and environmental engineering and engineering mechanics.

“If we have a baseline model before and after an earthquake, we can examine the damage more accurately.”

The new technology will also allow for a safer examination by inspectors who won't have to enter a dangerous building or stand on top of an unstable pile of rubble while rescuers are working.

However, the new lab won’t just be for civil engineers. UD notes in its press release that researchers in artificial intelligence will also work in the lab to help refine techniques to help automate the detection of building defects.

Other students studying human factors and psychology will also be utilizing the lab to examine how people interact with buildings and how to better define a structure’s “user-friendliness.”

“Civil engineers design things for humans, but usually we don't think about how humans react to our designs. Now we can bring people into the virtual environment to see how they respond when they see the space — are they happy, mad or indifferent — even before it's built. It can help us optimize our construction design to make a building more comfortable,” Liang said. “It's more efficient and cost-effective to determine up front whether this building won't work for the stakeholders and end users.”

UD reports that students are already using the lab to further immerse themselves in the University's Roger Glass Center for the Performing Arts, which is currently under construction. Arts center contractor Messer Construction is also reportedly using the technology.

In the future, Liang said he hopes that UD will open the lab to industry partners.