Last week, the Peljesac Bridge officially opened in Croatia, marking the largest ever EU infrastructure investment in the country. The bridge, which provides a road link between two parts of the country to cut travel time by 37 minutes, was coated using Cortec Corporation's corrosion-prevention technology.

Measuring a total of 2,404 meters (7,887.14 feet) long, the Peljesac Bridge features 13 spans, five of which are 285 meters long, six centrally placed reinforced concrete pylons with a height of 33 meters, and two lanes together with a stop lane that will serve for bridge maintenance.

The design reportedly utilized an extra dosed bridge with an integrated hybrid structure to meet the main criteria of the design, including stability, durability, economy and integration into the environment.

Cortec announced at the end of last year that contractors specified its MCI-2018 product for the job to protect against corrosion and extend the life of the bridge. According to the company’s emailed release, the coating acts as a silane-based impregnation with a migrating inhibitor property to protect against the harmful effects of corrosion. 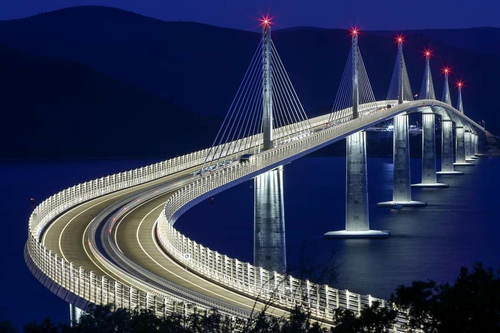 The work was reportedly performed in accordance with the project requirements and after surface preparation, which included:

After application, continuous monitoring of the structure’s condition at one central place was done during the construction phase. It will also be done at the exploitation phase to examine parameters of structural behavior, time, seismic activity and structural durability. With this product, the team hopes for the bridge to achieve a 130-year service life.

“Our MCI technology is used in largest construction projects throughout the globe. Witnessing its application in my home country on this monumental bridge structure is truly a special. Peljesac bridge is huge step forward for all of us,” said Cortec’s CEO, Boris Miksic.

Miksic, who is also a Croatian-American businessman, added he is proud that his patented technology was used on this historic project to connect two parts of his country.

“A strategic investment such as this bridge, demonstrates European Commission’s commitment to bring people together and unite territories, while reinforcing the territorial cohesion of the region and helping other neighboring countries,” wrote the company.

While historic, the Peljesac Bridge wasn’t met without controversy. The primary point of contention that previously kept the bridge from being built was concern over maritime borders: The government of Bosnia and Herzegovnia (BIH) maintained that the boundary needed to be clearly drawn before work could begin.

In August 2017, before any bridge deal was struck, the Bosniak Member of the Presidency of BIH Bakir Izetbegovic noted that the country did not dispute Croatia’s right to link parts of its territory, but BIH should also not be denied access to the open ocean. At the time, Izetbegovic went on to add that the BIH had maintained this stance since 2007. The Peljesac Bridge project went out for bid in September 2017.

China Road and Bridge Corporation won the bid to work on the project with its 2.08 billion kuna (around $340 million) offering. The E.U. provided 85% of the funding for the 2,000-meter-long (roughly 6,500-foot-long) cable-stayed bridge.

According to Ponting Bridges, the structure’s design features an orthotropic steel deck, with the central part of the bridge being built using a balanced cantilever construction method. Ponting was responsible for preparing the bridge’s preliminary and final design. Construction began in July 2018.

Tomislav Mihotic, State Secretary of the Ministry of Transport, noted that it was imperative that as many Croatian subcontractors as possible remained involved in the project. The maritime boundary issue remained, but no one issued a stop to the project.

Bosnian Serb leader Milorad Dodik announced in October 2018 that he would not greenlight a lawsuit filed by Sarajevo with the International Tribunal for the Law of the Sea. The lawsuit dealt with the construction of the new bridge.

The European Union remained wary of letting state-owned Chinese firms work on the bridge. China Road and Bridge’s proposal undercut the nearest competitor by nearly $100 million, which has led to some legal issues. The European Commission was investigating at the time whether the contract was awarded in line with E.U. rules.

Employment matters were another concern: It remained unclear how many of the jobs would go to locals, as many Chinese state firms bring their own workers for construction projects. It also remained unclear if Croatian officials knew how much workers are being paid.

Euronews reported Croatian Prime Minister Andrej Plenkovi said during a celebratory ceremony that the bridge fulfils a long-time dream to have the Adriatic coastline connected.

"[It represents] a fascinating strategic accomplishment of the Croatian people and their state," Plenkovi added.

Officials had expected to complete the bridge and its connecting roads by June 2022.