A group of architecture students from the University of Southern California recently installed a new, award-winning structure in Joshua Tree National Park.

Dubbed the “Carapace Pavilion,” the prototype was designed as a replacement enclosure for standard double-restroom buildings commonly seen throughout state and national parks.

Back in November, USC reported that faculty and staff from its School of Architecture had been working with Associate Dean Douglas Noble to develop a standard double-restroom building that wouldn’t take away from the beauty of national parks.

Over the course of three years, USC reported that the project grew from a mere concept to an award-winning design. As described by Noble, the carapace—a hard, protective shell—pulled inspiration from the colors and landscape of the park.

The structure was also inspired by the skeleton of a cholla cactus. 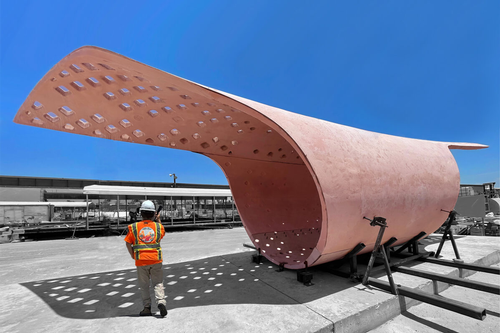 According to reports, the team designed and digitally fabricated a mold using a high-density foam milled by a computer numerical control machine.

Measuring 42 feet long, with 12 feet of overhang on each end, the Carapace Pavilion was cast as one foundation panel, two identical wall panels and two identical roof panels made of ultra-high-performance concrete.

The university went on to note that because of the concrete’s strength (having tested up to 25,000 PSI), it did not require any metal rebar inserts and used integrally mixed steel fibers instead.

When placed together, the pinkish-colored structure takes on a cylindrical form, specifically designed to blend into the curvilinear forms and surrounding rock formations in the park.

“The design sought a more site-specific form as an appropriate complement to the curvilinear forms of the rock landscapes and the colors and textures of the natural environment of Joshua Tree National Park,” said Nobel.

Before receiving approval to build the pavilion as a permanent installation in Joshua Tree National Park, the design was recognized by the Los Angeles Chapter of the American Institute of Architects.

“This is a life-bonding thing that we did,” Noble said. “They’ll come back to reunions in 40 years and people will say, ‘You’re the group that did that,’ and they can proudly say, ‘Yeah, that’s us.’”

At the time of the news report, the Carapace Pavilion was slated to be installed sometime between December and the end of March, toward the end of the park’s busiest season.

In late June, it was reported that the Carapace Pavilion had been successfully installed by the USC student and faculty team working on the project.

According to Hi-Desert Star, the pavilion has numerous site-specific features, including the shadows that point at the summer and winter solstice sunrise and sunset; and its orientation due north, framing a long-distance and close-up view from each end of the pavilion.

Placed within the Volunteers in Parks hidden campground in Joshua Tree, the structure required no onsite construction as all fabrication was completed offsite, which involved placing five casted panels of ultra-high-performance concrete on a single deck in the precast facility.

It is estimated that it will take only take one day, using only one truck and one trip, for future installations.

The structure is designed to last 100 years with effectively zero maintenance.

“The Carapace Pavilion is beautiful, and it looks like it belongs in Joshua Tree National Park,” Noble said. “It is powerful architecture that does not detract from the spectacular natural beauty of the national park.”

Back in August 2020, USC’s Viterbi School of Engineering announced the launch of a new master’s program in Advanced Design and Construction Technology.

According to USC: “The multi-disciplinary program will focus on the built environment, pulling together experts in various engineering disciplines such as civil and environmental engineering, computer and data sciences, large-scale 3D printing and artificial intelligence, to develop professionals who will apply design and engineering towards the creation of sustainable cities, infrastructure, buildings and systems of the future.”

More recently, in March 2022, researchers from the USC Viterbi School of Engineering announced that they created a new method for developing self-healing concrete, using engineered aggregates in place of natural aggregates.

The study, authored by Associate Professor of Civil and Environmental Engineering Bora Gencturk and Ph.D. candidate Xiaoying Pan, has since been published in Construction and Building Materials.