Last month, the Fleet Readiness Center East assisted the U.S. Coast Guard in figuring out how remove organic coatings from aircraft parts without certain chemicals or other common paint removal methods. The U.S. Coast Guard Aviation Logistics Center (ALC) in Elizabeth City, North Carolina, reached out to the FRCE to find a solution for removing the coatings, as well as help catch up on a backlog of parts following the establishment of new procedures.

The FRCE’s Materials Engineering Division is responsible for the materials and processes that affect an aircraft’s surfaces, such as bonding, painting, stripping and corrosion prevention.

ALC environmental protections processes only allow certain chemical strippers, which are not always effective at removing the coating. Additionally, maintenance manuals also state that paint removal methods like blasting or sanding cannot be used on parts that require non-destructive inspections for cracks after stripping. 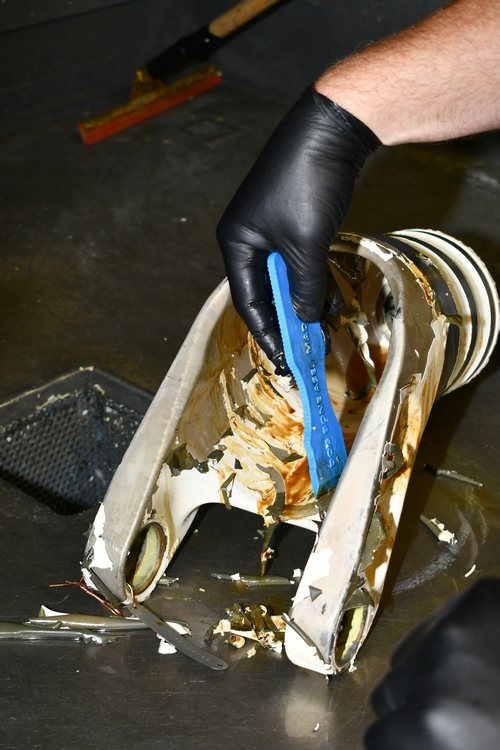 “Often, the technical manuals we use will state chemical stripping only, which means we can’t use sanding, because you don’t want to remove material. You don’t want to blast with plastic media because it can leave traces of the coating and the media, which can get embedded and reduce detection of cracks or defects in the part,” said Chief Warrant Officer 3 Hayward Workman, Industrial Operations Division Engineering Support Branch Chief.

“Chemical stripping was the only way to remove the coating and be in accordance with the procedures, but it was impossible with the kind of strippers that were available at the ALC. That’s when I reached out for help from FRCE.”

According to the U.S. Navy’s release, Workman reached out to Chris Gladson, Materials and Processes Branch Head at FRCE for suggestions. Gladson then invited Workman and his team to tour the paint stripping facilities at FRCE and to brainstorm on solutions to the Coast Guard’s problem.

While the FRCE and ALC were reportedly using similar methods of paint stripping, differences in Coast Guard and Navy regulations allowed FRCE artisans to generate a higher throughput than those at ALC, Gladson said.

Workman presented the information from FRCE to ALC safety and engineering teams, justifying the conclusion that more aggressive stripping agents could be used safely and effectively to remove the more resistant coatings from parts. As a result, ALC adopted similar procedures and safety equipment used at FRCE.

However, while establishing these procedures and obtaining the necessary equipment, the Coast Guard facility then developed a backlog of more than 60 parts that needed to be chemically stripped before they could be inspected and repaired at the ALC.

“Although FRCE’s workload is planned out far in advance, occasionally a fleet unit will need assistance on an emergent basis. That’s when they reach out to us,” said Linda Holton, business office operations specialist in the FRCE Workload Acceptance Branch. “Our team communicates with the planners and the supervisors to ensure the emergent parts can fit in with the regular planned work. We get a lot of satisfaction from helping the fleet units when they need us most.”

The Small Clean Shop at FRCE was then able to assist with the backlog parts, prioritizing the Coast Guard’s workload and helping them get back on track.

“We had three or four artisans out of our paint stripping shop working on these parts as they came in, and a couple of engineers and I pitched in as well,” Gladson said. “The extra manpower assisted Coast Guard personnel in clearing the backlog in an efficient manner. We were really glad to be able to help.”

Both Workman and Gladson said that the benefits of the cooperation go beyond the one0time project, with each facility being able to learn from the other.

“Recently, when we run into problems or try something new, I can reach out to the Materials and Processes Branch, and the FRC already has the procedures and has experienced what we’re experiencing,” Workman said. “The team has shared how they’re doing it and let us look at their local procedures.  Basically, it keeps us from having to start over from scratch by seeing what’s working for them.”

Last year, a team from the FRCE examined new possibilities for quickly and accurately detecting corrosion and preventing its spread on Navy- and Corps-owned military aircraft. According to the Defense Visual Information Distribution Service, the aircraft maintained at FRCE operate within some of the planet’s most extreme weather conditions, which often require costly and time-consuming corrosion inspection and repair processes.

To better mitigate corrosion and costly repairs, the team at FRCE started working under an F-35 Lighting II program, where members observed the demonstration of a tool created to help identify corrosion on a variety of aircraft coatings and help prevent its spread.

Through the use of a mid-wave infrared camera to visually penetrate aircraft coatings and record images of the surface below, the Grey Gecko Real-Time Inspection Tool, or GRIT system, aims to reliably identify corrosion and help facilitate faster, less objective corrosion inspections that reduce corrosion growth and associated costs, and increase aircraft availability.

“Corrosion is a recurring theme across all forms of aviation, resulting in huge cost and fleet availability impacts,” said Matt Crisp, FRCE site lead for the F-35 Joint Program Office, who organized the event. “Current detection methods for most aircraft involve visual inspection using traditional tools. These inspections are time consuming, sometimes require additional efforts like removing paint, and can be highly subjective based on inspector techniques, experience and attention to detail.

“The idea is to produce clear, easily understandable pictures of damaged areas that can be immediately shared with leadership, maintainers, investigators and customers,” said Ron Stearns, business development director at Grey Gecko. “It’s designed to be used plane-side by traditional maintenance personnel, and to complement phased non-destructive inspection intervals. One of the things that we're very proud of is that it can act as a vector to enhance or better target other methods that are prescribed in the maintenance manuals.”

Grey Gecko estimates use of the GRIT for non-destructive inspection can reduce aircraft downtime caused by corrosion by up to 25% and reduce the inspection manpower requirement by more than 50% in some applications.

According to Crisp, the demonstration, which was a first hosted by the F-35 program, was scheduled to familiarize the group with the product’s manufacturer, evaluate the equipment and its capabilities and limitations, and explore the potential for the tool’s use in both depot and fleet environments.

Moving forward, the F-35 team planned to conduct additional work with the ATI Team to observe additional technologies that have potential benefit for both F-35 and other fleet support teams and maintenance, repair and overhaul operations.