“Demand remained strong during the second quarter in The Americas Group and the Performance Coatings Group, as both groups delivered sales within our guidance,” said Chairman and Chief Executive Officer, John G. Morikis.

“Internationally, demand deteriorated faster than anticipated in Europe, and no meaningful recovery occurred in China following the lifting of COVID lockdowns, both of which meaningfully impacted Consumer Brands Group and Performance Coatings Group sales.”

In the Americas Group, net sales increased to $3.3 billion from $3.09 billion in Q2 of last year. The company attributes this primarily to selling price increases and higher professional architectural sales volume in North America paint stores, partially offset by lower sales volumes in protective and marine and DIY end markets.

Segment profit, however, decreased by 3.7%, reporting $700.4 million compared to $727.3 million reported in 2021. The decrease was noted to be due primarily to higher sales volumes and selling price increases, which were partially offset by increased raw material costs.

“Speaking to trends in the business since our June 8th investor day, pro architectural demand in The Americas Group accelerated as the quarter progressed and has meaningfully strengthened further in July,” Morikis said. “Similarly, Performance Coatings Group demand remained strong through the quarter in North America, the Group's largest region, and this strong demand has also continued into July.” 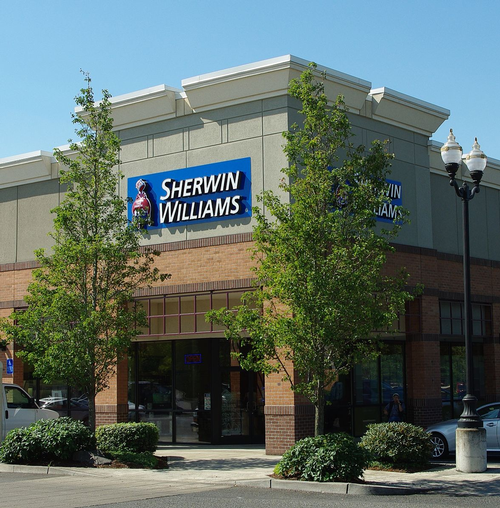 In the Performance Coatings Group, net sales increased by 15.2%—from $1.55 billion to $1.79 billion, due to higher sales in most end markets, primarily attributable to selling price increases and sales volume growth in the company’s packaging and coil businesses, according to Sherwin.

Net sales in the Consumer Brands Group also increased—from $731.5 million in 2021 to $737.9 million in the second quarter of 2022. This uptick in sales was primarily due to selling price increases in all regions, partially offset by lower sales volume outside of North America.

To note Sherwin’s liquidity and cash flow, the company reported having generated $639.7 million in net operating cash during the first six months of 2022, a decrease from the $1.20 billion reported in the same period last year. This cash generation, along with an increase in the company’s short-term borrowings, allowed Sherwin-Williams to return cash of approximately $1.01 billion to its shareholders in the form of dividends and share repurchases, as well as repay $260.2 million in long-term debt, and close an acquisition in the second quarter.

It was also reported that Sherwin-Williams closed two additional acquisitions on July 1, which will be reported in the company’s third-quarter results.

“At the same time, we are disappointed in our weaker than expected earnings results in the quarter, which were primarily related to the lower-than-expected sales in the Consumer Brands Group and the Europe and Asia Pacific regions in the Performance Coatings Group, raw material costs that have not yet moderated despite sequential deflation of feedstock costs and supply chain inefficiencies incurred in serving our customers. We are taking aggressive actions throughout the second half of the year in response to these challenges.”

Looking ahead, Morikis noted that the company is expecting to see an increase in consolidated net sales by a high-single- to low-double-digit percentage, thanks to strong demands witnessed in the company’s pro architectural business and industrial markets.

“We expect third-quarter 2022 consolidated net sales to increase by a low- to mid-teens percentage compared to the same period a year ago,” said Morikis. “We are maintaining our full-year consolidated net sales guidance to be up by a high-single- to low-double-digit percentage based on the strong momentum we are seeing in our pro architectural business in The Americas Group and continued strength in North American industrial demand in the Performance Coatings Group.”

In closing, Morikis added, “We are responding aggressively to inflationary pressures by implementing a 10% price increase in The Americas Group, effective September 6, with significant additional pricing actions being taken in our other two operating segments. We will manage our expenses tightly in the second half with the slowdown in market demand in certain regions and businesses; however, we will continue to invest in growth, including stores, sales representatives and innovative products. We remain highly confident in our strategy, our people, and our ability to emerge as an even stronger company following the current near-term pressures.”