Researchers from the Massachusetts Institute of Technology have reportedly developed a biodegradable system based on silk to replace microplastics found in agricultural products, paints and cosmetics. According to MIT’s release, the method is inexpensive and an easily manufactured substitute.

According to the European Chemicals Agency, the tiny particles of plastic are amounting to an estimated 50,000 tons a year in the European Union alone. The EU has already declared that the nonbiodegradable microplastics must be eliminated by 2025, despite suitable replacements not yet existing.

Microplastics are widely used in industrial products to protect some specific active ingredient, or ingredients, from being degraded by exposure to air or moisture, until the time they are needed. For example, vitamins can be delivered in the form of microcapsules packed into a pill or capsule, but these materials are plastics that exist in the environment for a long time.

They can also come from other sources, such as degradation over time of larger plastic objects like bottles, packaging or car tires. Marelli said that each of these sources may require its own kind of solutions for reducing its spread, noting that the European Chemical Agency estimates that the intentionally added microplastics represent approximately 10-15% of the total amount in the environment. 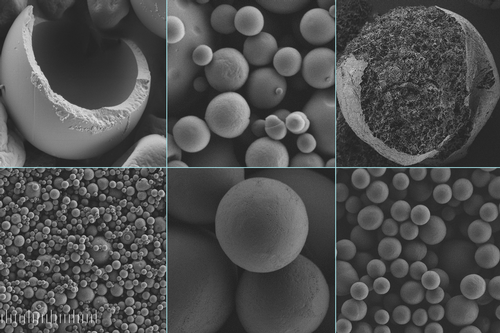 “We cannot solve the whole microplastics problem with one solution that fits them all,” he said. “10% of a big number is still a big number. We’ll solve climate change and pollution of the world 1% at a time.”

Liu explained that the silk protein used in the new alternative material is widely available and less expensive, unlike high-quality silk threads used for fine fabrics. Non-textile-quality silkworm cocoons can be used, with the silk fibers being dissolved using a scalable water process that can provide a simple “drop in” solution for factories.

MIT reports that silk is recognized as safe for food or medical use, as it is nontoxic and degrades naturally in the body. The silk-based coating material was reportedly demonstrated to be used in existing, standard spray-based manufacturing equipment.

The coating was then used to make a standard water-soluble microencapsulated herbicide product that was tested in a greenhouse on a corn crop. Liu stated the test showed it worked even better than an existing commercial product, inflicting less damage to the plants.

“There is a strong need to achieve encapsulation of high-content actives to open the door to commercial use,” said Marelli. “The only way to have an impact is where we can not only replace a synthetic polymer with a biodegradable counterpart, but also achieve performance that is the same, if not better.”

Additionally, Liu explained that the tunability of the silk material makes it compatible with existing equipment. By precisely adjusting the polymer chain arrangements of silk materials and addition of a surfactant, it is possible to fine-tune the properties of the resulting coatings once they dry out and harden.

For example, the coating can be hydrophobic or hydrophilic, as well as “anywhere in between.” It can reportedly be made to match the characteristics of the material it is being used to replace.

As part of the study, Liu froze the forming droplets to study the formation process, using a spray-freezing system. The “payload” material and coating material are mixed together in the solution and sprayed, allow the payload to be embedded in the shell of the coating material.

“To encapsulate different materials, we have to study how the polymer chains interact and whether they are compatible with different active materials in suspension,” she said.

By using low-grade silk unusable for fabrics, it diverts that material from being disposed of in landfills. The method also uses bulk silk, allowing production to be ramped up globally to meet local demand if the process becomes widely used.

The work was supported by BASF through the Northeast Research Alliance (NORA).

In October last year, a study conducted by the University of Plymouth and the Marine Biological Association (MBA) observed that paint flakes could be one of the most abundant types of microplastic particles found in the ocean.

The study, published in Science of the Total Environment, collected 3,600 samples from the North Atlantic Ocean. Each cubic meter of seawater reportedly contained an average of 0.01 paint flakes, following behind 0.16 particles per cubic meter of microplastic fibers.

These paint flakes also contained high quantities of lead, iron and copper due to having anti-fouling or anti-corrosive properties. Researchers explained that this could pose a threat to the ocean and marine life if ingested.

In December, a research team from the Department of Environmental Sciences at the University of Basel and the Alfred-Wegener Institute at the Helmholtz Centre for Polar and Marine Research on the island of Heligoland published a study analyzing microplastic particles and paint fragments in Antarctica.

The study also noted that more than half of the sample fragments collected had visual characteristics similar to the ship paint on the research vessel Polarstern. Researchers further analyzed these fragments at the Center for Marine Environmental Sciences (Marum) at the University of Bremen.

Utilizing x-ray fluorescence (XRF) to identify pigments and fillers, it was revealed that 89% of the 101 microplastic particles studied had originated from the team’s Polarstern ship, with the other 11% coming from other sources.

Researchers indicated in the study that ship paint would typically be released during ship maintenance at docks, but also during operation through coating abrasion and weathering. They also noted that water surface tension might retain paint particles in the water surface layer, negatively affecting the environment.

According to the study, paint produced with plastic polymers can leak into the environment several ways: during application, wear and tear and removal (micro-leakage) or with unused paint or end-of-life of the painted object (macro-leakage). Paint has on average a 37% plastic content.

The total leakage from paint is reportedly estimated to be between 5.2 to 9.8 metric tons per year, with the average being 7.4 metric tons annually and a 40% leakage rate. About a third, or 37%, of this leakage occurs as a result of waste mismanagement and about 18% stems from wear and tear or maintenance of ships and offshore rigs.

The study noted that while paint is the largest contributor, it is “not without reason as paint delivers value by protecting objects from environmental degradation and corrosion” used on infrastructure. It increases the lifetime of objects and eliminates the need for frequent replacement or maintenance, including any associated environmental impacts.

Most recently, in April, a research team from Northwestern University announced that they developed a sponge capable of cleaning up oil, microplastics and phosphate from polluted waterways. The sponge, referred to as the pollution “Swiss Army knife,” can reportedly absorb 99% of phosphate ions it encounters and 30 times its weight in oil.

In addition to utilizing and recycling discarded sponges, the technology aims to help clean up oil spills without harming marine life and prevent algae blooms from phosphate building up to dangerous levels. The oil and phosphate can then be wrung out of the sponge to be recovered and reused as well.

Starting with a focus on oil spills, the researchers developed a patented nanotechnology coating that attracts oil and repels water. This coating can then reportedly be tailored to capture other pollutants, including phosphate, microplastics and, in the future, heavy metals.

Additionally, these sponges could potentially be deployed in drains where stormwater is dumped into lakes, rivers or the ocean. Dravid notes the coating could also be used on foam and other materials, or a net can be filled with different sponges to attract several pollutants at once.

According to reports, the team is continuing to develop new versions of the coating, including one that can passively capture CO2 from the air to help fight climate change.