The renovations are part of a $1.6 million project to enable Airmen to accomplish multiple full-scale aircraft paint jobs simultaneously, while saving money and time.

“The renovations and new equipment will allow many more paint jobs to be completed, and at a higher quality,” said Karen Maraschino, 31st Maintenance Group Projects and Facilities Manager.  “It reduces the [aircraft] downtime from two-three months to two weeks and saves $60 thousand for each full-scale paint job which is a win-win.”

The facility now includes an aircraft wash facility, small parts paint booth and separate clean and dirty rooms. According to the release, it also features a new sprinkler and foam fire suppression systems, a generator, a ventilation system and plenum door for laminar air flow.

“Our team can now have an aircraft in the wash bay, paint bay and sanding bay at the same time, comparable to world class corrosion control facilities,” said Maraschino. “The new paint booth enables us to accept more requests as well as have faster turnaround times.” 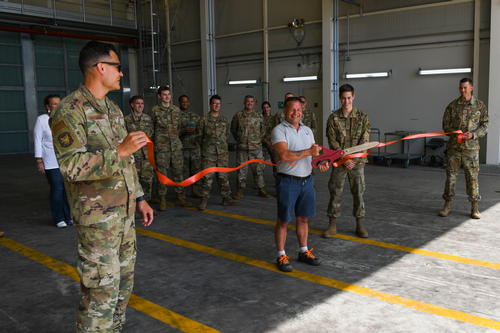 With these additions, Aviano Air Base was reportedly able to remove a permissible deviation waiver for the airfield and reduce the building footprint by two builds.

The 31st CE Engineering Flight, Fire Department, MXS Fabrication Flight and MXG Facilities Team worked to complete the new corrosion control facility, which the Air Force says will have a significant impact on Aviano’s mission and keep more jets in the air.

“Despite the long hours, meetings, inspections and challenges, everyone involved overcame these hurdles to complete this big project,” said Maraschino.

Construction for the NATO-funded facility at Aviano began in April 2009. Multiple follow-up projects needed to be complied into a contract to meet Air Force regulations due to variances in specifications between NATO and Air Force facilities.

In 2012, the 31st Maintenance Squadron unveiled its first locally-painted F-16 during the ribbon cutting ceremony for the facility on Oct. 19. At the time, the 31st Fighter Wing expected that they would save $32,000 per aircraft by painting the F-16s locally as opposed to sending personnel on temporary duty to another base to accomplish the work.

The corrosion control section would include sanding, media blasting, priming, painting and stenciling an entire F-16. At the time, personnel reported that the number of aircraft scheduled to be painted each year varies but two more F-16s were expected to be completed at the facility by the end of the year.

“Corrosion control ensures that our F-16 fleet doesn't rust or corrode, which creates weakness in the structure of the aircraft. This is incredibly important when you look at the age of our F-16 fleet and how much longer we anticipate using them,” said 2nd Lt. Eric Boehm, 31st MXS fabrication flight commander at the opening.

An aircraft is “scored” for overall paint integrity, with missing, deteriorated or faded paint detracting from the score. Its score then determines if an immediate full paint is required, or scheduled touch-ups and inspections to mitigate the amount of full paints required.

From start to finish, the corrosion control facility shop could have a jet sanded, primed and painted in less than a week.

In November 2020, the U.S. Air Force Research Laboratory announced it would be investing $60 million into the research and development of an improved anti-corrosion coatings for aircrafts.

The five-year investment also includes upgrading its Supersonic Rain Erosion Test Rig (SuRE) at the Wright-Patterson Air Force Base, maintained and operated by the University of Dayton Research Institute in Ohio. According to the university, SuRE has been used as the national and international standard for testing the rain erosion resistance of a variety of aerospace materials and coatings since 1967 and was originally developed under contract by Continuum Dynamics.

The 8-foot-diameter machine reportedly uses a rotating arm and 96 calibrated needles to simulate flight in a 1-inch per hour rainfall. Tested materials can be analyzed at transonic and supersonic speeds up to Mach 2.3 (650 miles per hour), and is recorded in real-time video where it can further be monitored and allow for “time to failure” testing.

The Air Force Research Laboratory reports that organic improvements to the rain rig include introducing flexibility to the executed erosion pattern, replacing the current control hardware with a highly adaptable and capable LabVIEW (type of control hardware and software platform from NITM) interface and automating secondary operations.

Improvements made to the full control system are expected to save approximately $40,000 annually in sustainment costs and will reduce the manpower required to run a test by one-third and maintenance downtime by 25%.

The SuRE is operated by UDRI as part of the larger AFRL Impact Erosion Test Facility. A Cooperative Research and Development Agreement with the U. S. Air Force allows UDRI to provide easy access for commercial and government customers. Full-service testing is provided to dozens of joint, international, and commercial customers each year.