In reviewing an analysis of the U.S. Bureau of Labor Statistics’ Producer Price Index data by the Associated Builders and Contractors, in addition to results from the June Dodge Momentum Index, industry economists share that while prices are continuing to increase, the risk of a recession still isn’t definite—at least not until later this year or sometime in 2023.

“A new cyclical high in the Momentum Index is a sign that developers feel that projects still have hope of moving forward, despite concerns of an impending economic slowdown,” said Dodge Chief Economist Richard Branch in a press release. “However, this sentiment will be tested in the months to come as higher interest rates eat away at business and consumer confidence.”

For the month of June, Dodge reported that its DMI, a report issued by Dodge Construction Network that measures nonresidential building planning, increased by 0.3% from the 173.1 recorded in May to 173.6, marking a 14-year high benchmark.

Leading the group was manufacturing construction starts, which were reported to also reach a record high of $41.6 billion over the last 12 months ending last month. According to Dodge data, that’s 161% more than what was reported in May 2021. 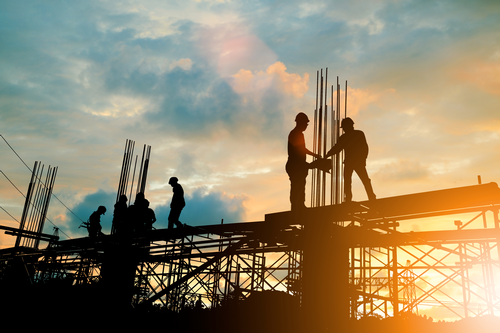 lamontak590623 / Getty Images
In reviewing an analysis of the U.S. Bureau of Labor Statistics’ Producer Price Index data by the Associated Builders and Contractors, in addition to results from the June Dodge Momentum Index, industry economists share that while prices are continuing to increase, the risk of a recession still isn’t definite—at least not until later this year or sometime in 2023.

The report also highlighted that the commercial component for the index rose 4.1%, while the institutional component fell 6.2%. Increases in commercial planning were attributed to an increase in warehouse projects, while other commercial structures fell flat.

As for institutional planning, Dodge noted that a decrease in education projects pulled the sector down. However, healthcare projects were reported to be on the rise.

In total, 27 projects entered the planning stages in June with a value of $100 million or more.

According to reports, the latest jump in DMI can be attributed to American companies bringing manufacturing efforts back into the United States. Dodge forecasts that South manufacturing starts will reach $12.82 billion in 2022, a 3% increase from a year ago. In the West region, Dodge expects manufacturing to increase by 47% from a year ago, landing somewhere around $14.39 billion for 2022.

All three energy subcategories were reported to experience price increases, with natural gas prices rising 24.3% for the month.

“It’s no secret that contractors and their customers have been walloped by massive increases in construction materials prices,” said ABC Chief Economist Anirban Basu. “That inflation continued through June, as reflected in the decline in profit margin expectations seen in the most recent reading of ABC’s Construction Confidence Index. But more recently, key commodity prices have declined, so it may be possible we have achieved peak inflation.”

In looking at other components of the price index specifically, ABC reported the following increases over 12 months:

“Indeed, with much of the world at risk of recession, there is likely to be further downward pressure on commodity prices going forward,” Basu added. “Oil prices had been in the range of $120/barrel recently. As of this morning, the price of oil has dipped into the low $90s. Similarly, natural gas prices have been in decline. In part, this may be because global supply chains are readjusting to disruptions caused by the Russia-Ukraine war. The war creates an ongoing risk of sudden spikes in certain commodity prices, but we appear to be entering a new phase in input price trajectory.”

In a recent report issued by ConstructConnect, economists looked at whether the easing of year-over-year construction material prices was promising, or just wishful thinking.

According to the report, in June of 2021 the average year-over-year gain for the two Producer Price Index (PPI) series designed by the Bureau of Labor Statistics (BLS) to specifically capture construction input costs was +30.0%. The latest average climb for this month is down by nearly half, to +16.4%.

While the industry is still witnessing hefty year-over-year price increases for steel and aluminum products, the larger jumps are more recently being recorded in the energy-related products. Nevertheless, ConstructConnect reports that the number of inputs with outsized percentage increases over the last 12 months is considerably less than earlier this year.

Although there is encouragement that could be taken from the report that the worst of construction material inflation is receding, there is hesitation that the numbers could only be temporary.

Also in June, financial services company Moody’s Analytics reported that although the U.S. economy was continuing to witness inflation, dropped savings rates, and increased revolving credit and interest rates, there was still reason to be optimistic that consumers wouldn’t buckle under the pressure.

To mitigate these issues, the Federal Reserve began a series of interest rate hikes. Recently, the Fed was reported to have raised the rates by half a percentage point in May—the largest increase since 2000—and has signaled further half-percentage-point increases in July and August.

President Joe Biden was also reported to take action to reduce gas prices and combat inflation since March, including the release of one million barrels of oil per day from the nation’s Strategic Petroleum Reserve. Additional efforts will also address affordability for families, prescription drugs, housing and childcare.

What If There is a Recession?

In response to the latest reports, American publicly traded corporation S&P Global released an economic outlook for the construction industry. Specifically for homebuilders and developers, the North American Corporate Credit Mid-year Outlook has reportedly dimmed regarding avoiding a recession.

However, if the U.S. economy were to fall into a recession later this year or in 2023, S&P Global reported that construction had the potential to fare well, pointing to the overall need for additional housing throughout the country.

The industry has also been noted to develop a widening credit buffer, which would also help.

A copy of the full report can be viewed here.