The trial for 59 people accused of manslaughter and other charges in the 2018 collapse of Italy’s Genoa Morandi Bridge began last week before adjourning for the summer.

Now four years after the accident, which killed 43 people, former executives and technical experts of the company that manages many of the country’s bridges and highways, as well as former officials of the Italian Ministry of Infrastructure and Transport, are accused of knowing the bridge could collapse but failing to act. The defendants deny the charges against them.

Late in the morning on Aug. 14, 2018, lightning struck the Morandi Bridge. At the time, 35-mile-per-hour winds were recorded with a thunderstorm moving through the area. A 200-meter (656-foot) section of the prestressed concrete span collapsed, killing 43 people and creating a gulf between two sections of the bridge.

The cable-stayed concrete bridge, also known as the Polcevera Viaduct, completed in 1968, was designed by Italian civil engineer Riccardo Morandi. According to the website Retrofutur, the bridge is characterized, as are other Morandi structures, by thin prestressed concrete girders and relatively few stays. Three A-shaped concrete pylons held four prestressed stays apiece. The website has chronicled numerous projects over the years to reinforce the structure, including steel sheaths over the concrete pylons. 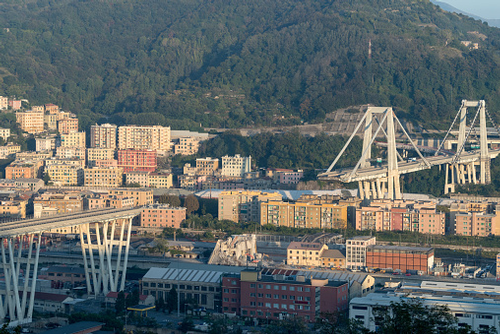 SurkovDimitri / Getty Images
The trial for 59 people accused of manslaughter and other charges in the 2018 collapse of Italy’s Genoa Morandi Bridge began last week before adjourning for the summer.

While experts believe that structural weakness and decaying steel rods contributed to the collapse, previous warnings about the condition of the bridge were issued years before disaster struck. For example, in 2012, the leader of Genoa's business federation noted that the bridge could collapse within 10 years. In 2011, a report from Autostrade per l'Italia, the operator of the A10 highway that ran over the bridge, warned of intense decay.

As for the legal case surrounding the disaster, 71 people were accused, ranging from managers to civil servants, involving more than 100 lawyers, 120 experts and 75 witnesses.

By November, officials announced that they had begun testing debris from the site to help determine what caused the collapse. At the same time, Genoa Mayor Marco Bucci announced that the demolition of what remains of the Morandi Bridge would begin Dec. 15, 2019, which would make way for a new overpass over the city.

In late June of 2019, towers of the Morandi Bridge were demolished. According to the BBC, the two towers brought down amounted to around 4,500 tons of concrete and steel. Water tanks were also put around the tower bases to help prevent dust becoming an issue in the immediate area.

In December 2018, officials announced that Italian architect Renzo Piano would be overseeing the structure’s replacement, using his own design which featured 43 posts, each one honoring a victim of the collapse.

According to reports, the design involved having a 3,600-foot-long main steel deck running across 20 spans, supported by 18 elliptical reinforced concrete piers placed at 164-foot increments. The exception was a set of piers that would be set 328 feet apart to account for the Polcevera River. Solar energy stored during the day is slated to power the bridge’s lights and lamps at night, which will cast light shaped like a ship’s sails.

Steel elements for the project were provided by Fincantieri, from its Genoa-Sestri Ponente shipyard, with work being distributed to other shipyards, as necessary. The steel deck was assembled in parts onsite.

Additionally, to ensure the tragedy never repeats, the bridge has also been equipped with its own monitoring system and a fleet of robots which will monitor the hull, should any alarming structural changes occur.

The structure has been designed to last at least 100 years.

By February 2020, officials announced that work on the bridge’s replacement had surpassed the halfway mark, with 16 of the 18 40-meter-high (131 feet) columns—which are partially sunk 50 meters into the ground—constructed and seven out of 19 deck sections laid into place.

Although Italy experienced a lockdown in March due to COVID-19, reports indicate that strict safety measures were enforced so that the project could continue. According to CNN, during this time, only one employee tested positive in late March, and has since returned to work along with colleagues who had been in contact with him and had underwent a quarantine period.

The strict safety procedures including daily temperature monitoring, daily contact tracing, hand sanitizer distribution and social distancing, among others, were coordinated by RINA Consulting, which was brought onto the project has a project manager for the replacement.

Throughout the course of the project, RINA reported that it had underwent approximately 600 audits dealing with technical, quality, safety and environmental aspects of both the demolition and reconstruction plans; was subject to 2,000 inspections at production plants and onsite; and generated 3,000 technical documents.

In April 2020, joint venture Pergenova, made up of construction and civil engineering business Salini Impregilo and shipbuilder Fincantieri, announced that the final span for the Morandi Bridge replacement project had been installed, marking the imminent completion of the new infrastructure.

During the opening ceremony, Marco Bucci, Mayor of Genoa and commissioner for the project, said: “We did it, we did what we promised to do 18 months ago. This is a beautiful thing for Genoa. But our first thoughts must be with the victims and their families ... Our administration has supported the relatives along the way. This [tragedy] must never happen again.”

In the aftermath of the collapse and other transportation troubles, Italy’s Transportation Ministry ordered inspections of all the region’s overpasses and bridges—all of which were found to need some form of repair.

After an hour of procedural motions at the initial hearing on June 7, the court was adjourned by Judge Paolo Lepri until September. A new hearing is scheduled for Sept. 12 and is anticipated to take more than a year to reach any verdicts, the LaPresse news agency reported.

Charges range from safety failures and making false statements to multiple manslaughter. Prosecutors have a list of 178 witnesses that they want to call, including Autostrada's current CEO Roberto Tomasi and two former infrastructure ministers.

In April, a Genoa judge approved a plea bargain deal from highway company Autostrada per Italia and the Spea engineering company to pay 29 million euros ($33 million) to the Italian government in exchange for avoiding the trial.

However, among the defendants, former Autostrade CEO Giovanni Castellucci is accused of endangering safety on the roads and willful failure to take precautions to prevent disasters. He faces a maximum sentence of 15 years in jail if convicted.

The lawyer for Castellucci said the trial would show that the bridge collapsed not as a result of maintenance negligence but due to an original “construction defect.”

“This is why 43 people died in a terrifying and absurd way,” lawyer Giovanni Paolo Accinni told reporters.

Additionally, legal sources told Reuters that many of the lawyers for the defendants dispute the findings of an expert report into the causes of the collapse that took a year to compile. They could ask the court to annul the report and commission a new one.

Chief Prosecutor Francesco Pinto said his main concern was the trial could drag on too long before the statute of limitations kicks in, making impossible to reach a final verdict and automatically ending legal proceedings. “Unless this is done in a reasonable time, there will be no justice worthy of the name,” he told reporters.

“A different Italy can come out of this trial,” said Egle Possetti, head of the committee for victims of the disaster. “It's the tip of an iceberg because it's not just the Morandi bridge that had problems but the country's entire infrastructure that has to be controlled in a proper manner.”

Possetti, who lost her sister, brother-in-law and two nephews in the collapse, told reporters outside of the courthouse that it was a “difficult day but a very important one.”

“Today we are beginning a long and tiring journey that will bring truth and justice to our families,” she added.